The Chutzpah of Unethical Atheists—But We Actually Understand Why

You probably know that word “chutzpah.” (A similar term is “audacity.”) I am using that Yiddish word to describe the actions of an atheist who visited our Creation Museum last week. He got in free by cheating, toured the museum, and afterwards proceeded to blast the museum on his blog—a blog which is devoted to, as he calls it, “debunking Christianity.”

How did he get in free? He played on the generosity and sympathy of a museum staff member. The man came to the museum desk and declared that he only had a short time to spend at the museum and did not have the money in his budget to pay for a ticket. Now, he did admit that he was skeptical of the museum’s content. But the museum staff member, wanting to reach out to a person who expressed a financial need and also hoping the museum might challenge his thinking, allowed him in at no charge. We very much want skeptics to visit.

Conveniently, though, what didn’t he tell her? Well, that he was really at the museum as an atheist who was wanting to go through the museum and then would be blasting it—without having to pay. We have since learned that the man has written five books in the past few years and advertises himself as a speaker against Christianity—I doubt very much he is the pauper he pretended to be when he came here.

But coming here under false pretenses and getting in free doesn’t really upset me. Why? First, because he did hear God's Word throughout the museum, and “faith comes by hearing, and hearing by the word of God” (Romans 10:17). Perhaps this man will repent of his sins and believe in the Lord Jesus Christ. Second, because he is an atheist, this man is only acting consistently with his worldview. I understand his actions, though I certainly don’t condone them, for stealing is against all sorts of biblical teachings, including one of the Ten Commandments. But you see, he has no absolute standard by which he lives his life. So why is it even wrong in his secular worldview to misrepresent himself to us? He can justify being a cheater.

So I understand his mindset. I really do. If there is no God, how could an atheist ever say what is right or wrong? By what standard can he make that determination? If each person decides for himself what is right or wrong, then he can argue that what he did at the museum was not wrong. Secular atheistic humanism is a belief system about what we supposedly came from (nothing), what our purpose is in life (nothing), and what happens when we die (which again is nothing). Those who believe this way are only demonstrating the truth of Romans 1—they are suppressing the truth of God’s existence in unrighteousness. They claim to be wise, but Romans 1 states that they have become fools.

It also did not make me mad when I learned that as this atheist was leaving the museum, he left a business card with our guest services staff member—the one who had been so kind to him. The card had the words “debunking Christianity” on it along with his website address. Now he wanted her to know what he was really doing at the museum, as if he was gloating, “Ha! I deceived you.” But this behavior was consistent with his atheism.

I recently posted a Facebook comment about this man, with the title, “Atheist debunking—or an advertisement for the Creation Museum?” Like most atheists who write negatively about their museum experience, he simply described some of the exhibits and, with lots of hand-waving, just said we were wrong. His lengthy piece really offered no real rebuttals of the scientific displays. He mocked the exhibits more than anything. (He did seem to be impressed with our new Insectorium’s collection of insects, though.) But I’m not upset with him for another reason: the man seems to have a lot of followers (based on the number of comments he is receiving about his blog against us), and so I see his blog post as an advertisement for the Creation Museum.

This atheist certainly saw and heard God's Word in the museum, and we should pray for him. I understand that he comes from a church background, but apparently he did not receive any effective apologetics teaching, or perhaps it may have been weak teaching. I don’t know. So let’s pray for this atheist, that God will use His Word to convict him and lead him to salvation.

At the same time, I am not going to link to his blog here and give him some satisfaction that we are driving more web traffic to him. Of course, with a little effort you can find it, and I’m sure atheists will be linking to it and his numbers will grow. But for any atheists reading this blog post, I urge them to consider this AiG article on why atheism is irrational.

Meanwhile, because of cheaters like this man, we are greatly tightening up our procedures to make sure that people like this don’t take advantage of our generosity just so they can mock us. Actually, this museum incident shows he did not come to the Creation Museum with any other intent but to mock and speak against Christianity. Even before his visit, his atheistic, blind-faith religion had already biased what he would write about the Creation Museum!

We've had a number of instances of atheists not telling the truth (for them there is no such thing as “truth” anyway) in order to take advantage of us at the Creation Museum. For instance, TV commentator and comedian Bill Maher and his video crew lied and broke the rules to sneak into AiG. Here is what I wrote about that incident in 2007. And then there was this incident in 2010. And there have been other instances. Actually, the atheists’ behavior just illustrates Romans 1 over and over again—they work to suppress the truth because they know in their hearts that God created (Romans 1: 18–19).

Special Showing of Evolution vs. God

Yesterday we held a special all-staff meeting in Legacy Hall so that all AiG staff could watch Ray Comfort’s new film Evolution vs. God. The film interviews a number of atheist professors and students at California universities and one leading atheist from Minnesota. Not one person could come up with even one example of one kind of an animal becoming another to show evolution. Of course, the atheists cry foul, claiming creationists don’t understand evolution because you have to allow for millions of years to make it happen. But therein lies the point: Millions of years is a part of their atheistic religion. They worship time because they refuse to worship the God who created all things. And they do this because they don’t want to acknowledge they are sinners in need of salvation. 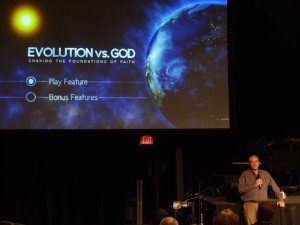 This well-produced DVD is a great resource to share with atheists. It could be a real eye-opener for them. It’s also a great resource to show Christians (and show our young people) as it demonstrates that evolutionists simply can’t defend their faith. Yes, molecules-to-man evolution is a blind-faith religion. You can order the DVD from our online store.

Thanks for stopping by, and thanks for praying (including for John, the former church-going man who is now an atheist),