Did you know there are many scientists and engineers working at NASA facilities around the country who are Bible-believing creationists? I discovered this for myself in early 1994—when AiG was a brand-new ministry—as I was asked to speak to the Bible club at the Goddard Space Flight Center of NASA near Baltimore. Several dozen people turned out to hear me give a talk on the reliability of the book of Genesis. While there, I was also introduced to people who were working to fix the Hubble Space Telescope.

The following is what I wrote about my talk at NASA in a May 1994 newsletter to the supporters of our new ministry, and then I’ll skip forward to 2011:

I had the opportunity recently to speak at a lunch meeting at NASA’s Goddard Space Center near Baltimore, arranged by the Bible Club there. Over one hundred people attended the meeting, including many scientists. Even though there was some opposition, the overall response was very positive.

One scientist told me how much the book The Lie had meant to him. Three physicists, however, invited me to their office afterwards to try to insist that Christians could accept evolution. We spent a considerable time talking through the issues, and one of the younger men indicated that he would have to rethink his position.

Perhaps the most thrilling part of this visit was to be taken on a tour by scientists who were both Christians and ardent creationists. One of these men is a director involved in refurbishing the Hubble Telescope. Another was a Project Operations Director for the satellite called “Extreme Ultraviolet Explorer.” They introduced me to a number of other scientists who also believed the Genesis account of creation and who were “on fire” Christians.

I had to shake my head as I thought of the number of times that evolutionists have claimed that no creationist can be a real scientist. There are probably many more scientists out there who are creationists than we realize! Now, back to 2011—Bill Daniels, the man who invited me to NASA in 1994 (and who was something of my “chauffeur” as I traveled in the area back then) visited the Creation Museum this week for the first time (with his wife Karen). We introduced them to the staff at our Thursday morning chapel. Afterwards, I had my photo taken with Bill and Karen. Bill and I heartily agreed that our beard color had changed a lot in 17 years! 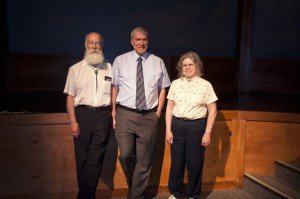 Here is a scan of our 1994 Update newsletter, which includes a photo of the Goddard Space Flight Center. 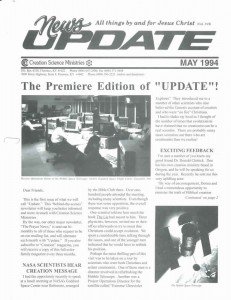 It’s always encouraging to learn that there are Christians involved in high levels of scientific activity, including within NASA. (Through a friend in Houston, we’ve heard that many creationists are employed at the NASA facility there.) As they work on such important projects as the Hubble Telescope and look into the universe, they don’t see the results of a “big bang” (see Does the Big Bang Fit with the Bible? for a refutation of the big bang), or that mindless, chance processes created our incredible universe. These Christians at NASA see the handiwork of our Creator God instead (Psalm 19:1).