Recently we received a $100 donation to sponsor a peg in the Noah’s Ark we are building in Northern Kentucky (part of our “peg, plank, and beam” sponsorships of the Ark Encounter project).

When we sent a reply to the donor, we received this email:

Thanks for the email, Jennifer. Mason is my son, whose donation was the result of money given him in lieu of presents (at his request) by his friends for his 7th birthday.

How we praise the Lord for the number of young children who are excited about AiG, the Creation Museum, and now the Ark Encounter project. God is raising up many such dedicated young people today!

You can sponsor a peg, plank, or beam and find out more about the Ark Encounter project at www.ArkEncounter.com.

In a couple of weeks, our new 1000-seat auditorium/multi-purpose room and lobby/coffee shop area next to the Creation Museum will be finished, and soon after, should be ready for us to use. I will keep you informed, but below are some photographs taken recently: 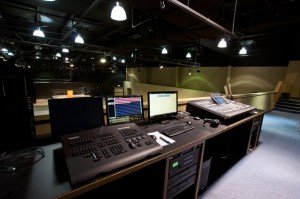 Part of the high-tech sound system 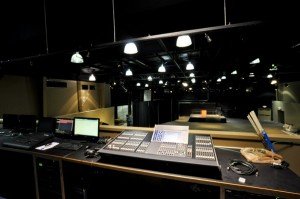 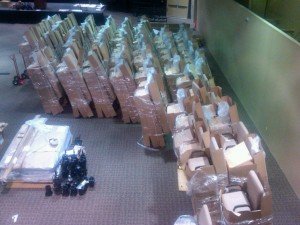 Yesterday we visited the island of Santa Cruz. This island has about 12,000 people that reside in the coastal town of Puerto Ayora. The town is also home to the Charles Darwin Research Station. This organization works with the Galapagos National Park to conserve the plant and animal life of the islands. The programs include eradication of introduced plant and insect species and feral animals (e.g., goats and pigs) and reintroduction of species that have been lost from islands due to feral animals or human eradication (e.g., land iguanas). Of course at the interpretation center we also see signs talking about millions of years and evolution, especially with the finches. However, what they understand as evolution over millions of years we know as natural selection and other mechanisms over a few hundred to thousand years, leading to different finch species.

The research station also boasts a large tortoise breeding program that helps reintroduce and maintain tortoises on certain islands. The star attraction of the day was the giant tortoises. The first one we see (that isn’t still a baby!) is Lonesome George. This tortoise is probably over 150 years old and the last of his species from Pinta Island. There are several different species of giant tortoises which are unique to the island on which they reside. They are trying to breed George with females from Volcano Wolf that appear to be Pinta hybrids in the hopes of re-establishing the species. Visit Georgia’s blog post to read more and see some photos from her trip.