Bott Here to the Museum

Dick Bott, founder of the Bott Broadcasting Network (which airs our "Answers" radio program on its large network, from California to Tennessee) visited the Creation Museum recently. In this photo, he's to the far right. Pastor Bill Owens and his wife Deborah of Memphis, Tennessee, Rich Bott (Executive VP of the Bott Network out of the Kansas City area), and I stand with Dick in the museum's portico. 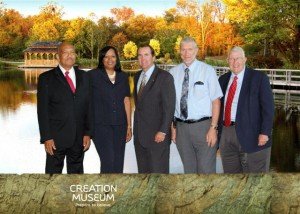 Last year, Dick was inducted into the National Religious Broadcasters "Hall of Fame" (the NRB is the world's largest association of Christian communicators, with 1,400 organizations as members).The NRB presents its Hall of Fame Award "to an individual who has made invaluable contributions to the field of Christian communications, all the while exhibiting the highest standards of conduct and evidence of faithfulness in Christ."

For over 55 years, Dick has been known to be careful about airing solid  Bible teaching programs—together with Christian news. Bott Radio Network also broadcasts nationwide over the Sky Angel Direct Broadcasting Satellite Service, and worldwide at www.bottradionetwork.com

Also recently here at the museum was a student group from Calvary Baptist Church in our area, who were led by Jeff Heyob. After a planetarium show, they heard Carl Kerby speak. 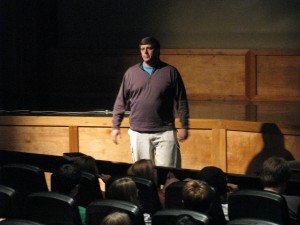 In addition, Andre van Heerden, CEO of Cloud Ten Productions and someone who helped produce the well-known Left Behind films, toured the museum with apologetics writer and speaker Darek Isaacs of Alabama (see photo). They filmed Dr. David Menton (our PhD biologist) about dinosaur remains that provide compelling evidence that dinosaurs have been around in the past few thousand years, and also interviewed Dr. Andrew Snelling (PhD geologist). 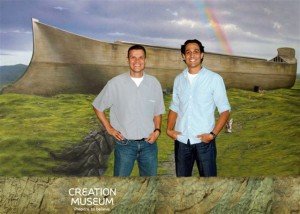 They are working on a film due out next year about dinosaurs from a biblical perspective. Their videographer, by the way, called the museum "incredible."

When I came to Japan nearly 14 years ago, if there were 50 people in the audience, that was considered a great response. The average church in Japan (and there are about 8,000  protestant churches) has only about 30 people.

For the two-day Creation Conference we just held (under the auspices of Creation Research Japan), where six of my presentations that were translated into Japanese and videotaped, over 300 different people were registered. The auditorium was filled for two days—and people stayed right to the end!  This is amazing for this country.

At the same time I spoke, a Korean native was also speaking on Genesis/creation/evolution. Between the two of us (we met for breakfast Sunday morning), we spoke to 450 different people—for such a pagan country with such a minority of Christians (less than 0.1 percent of the population), that is phenomenal.

Here are some more photographs (I posted some pictures yesterday) taken at the conference on Saturday: 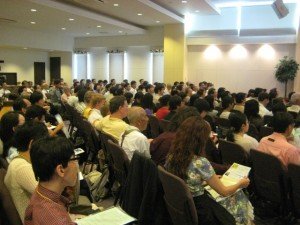 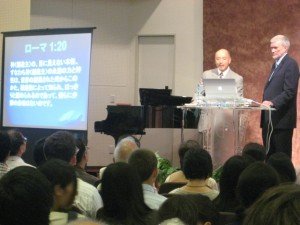 2. Me with my translator 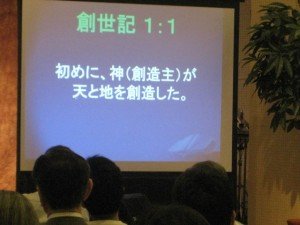 3.       It was important for all my power point slides to be in Japanese (hundreds of slides were translated before the conference) 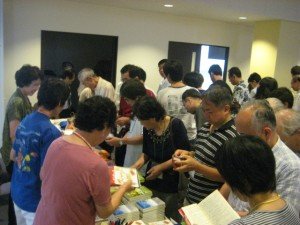 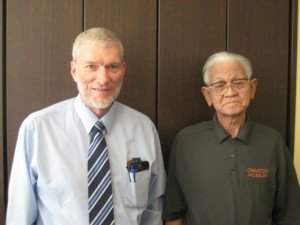 5.       I met with an 83 year old pastor (Nobuji Horikoshi) who is very active in challenging the pastors in Japan to take a stand on a literal Genesis (sadly, most don’t).  AiG’s Carl Kerby is coming to Japan later in the year to speak in a number of churches (the tour is being organized by this pastor) 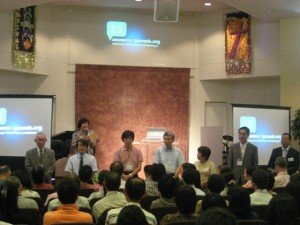 6.       The board members of Creation Research Japan (including 5 PhDs) being introduced to the audience

Please pray that the resources obtained at this conference, and the messages that were presented will have a major impact on the church in Japan.  Also pray the DVDs of the presentations—soon to be in post-production—will be spread far and wide.

Thanks for stopping by . . . and thanks for praying.