What incredible creature is this photo? It was just born at the Creation Museum. (By the way, this photo has not been altered in any way.) Hint: it is not a gecko. (Click the photo to enlarge it.) 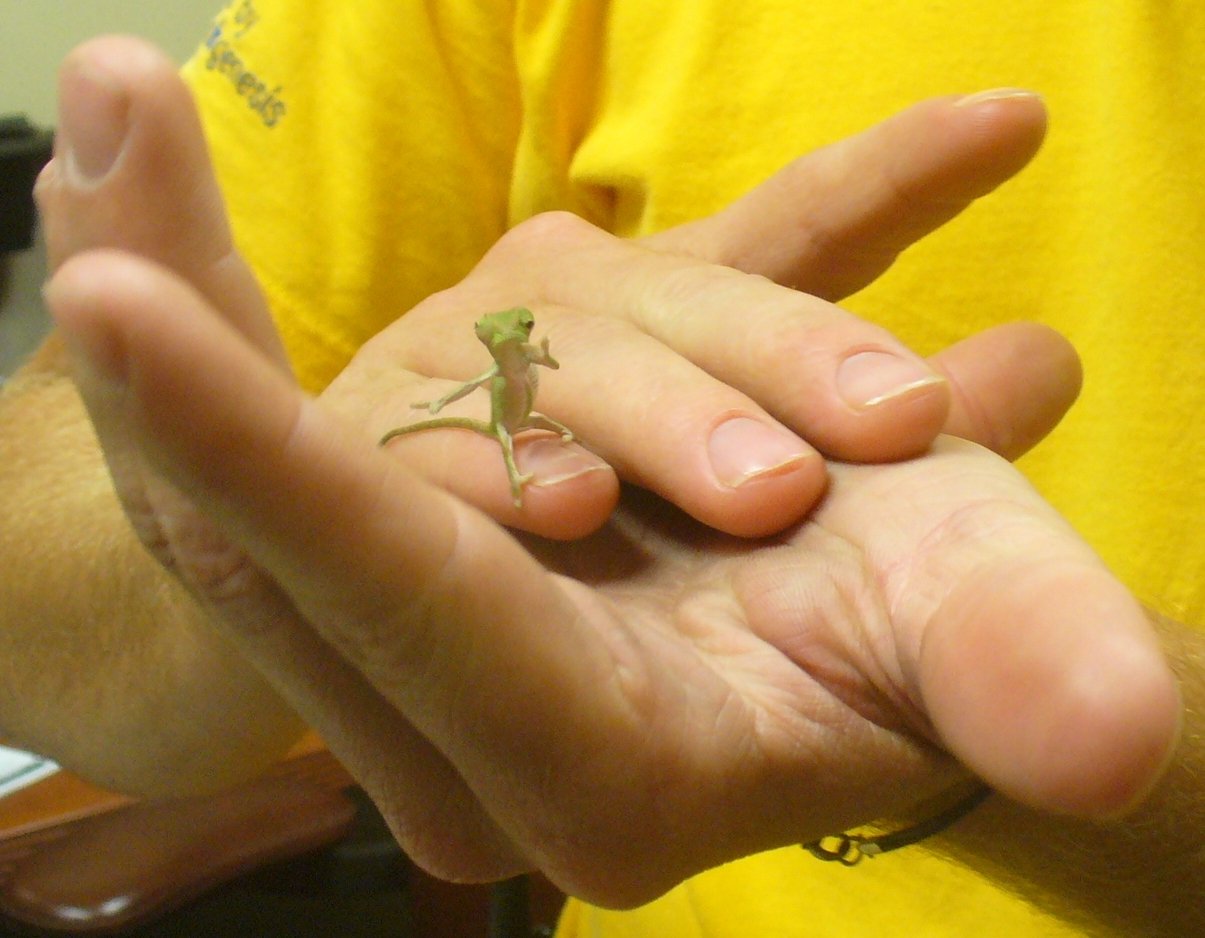 Send your guess to correspondence[at]answersingenesis.org (replace the [at] with the @ symbol). We’ll give you the answer in tomorrow’s blog post.

Dr. Terry Mortenson, one of our full-time speakers (most of them were like me this past weekend—speaking somewhere around the world; I’m in Japan right now) wrote to me from Michigan about some of his recent speaking opportunities:

I will be speaking on creation 10 times from Sunday morning to Thursday night at the beautiful Maranatha Bible & Missionary Conference center on the shores of Lake Michigan. We would appreciate your prayers that participants will go away strengthened in their faith and their ability to defend the faith in the context of an increasingly anti-Christian culture.

Last week I gave a lecture in the Creation Museum on “Millions of Years: Where Did the Idea Come From?” This is based on my PhD research. The next day the well-known (and self-proclaimed) atheist Dr. P.Z. Myers, a biology professor at the University of Minnesota–Morris, wrote a blog post about me with his usual caustic language. After labeling me a “crackpot,” he then proceeded to critique my lecture . . . without even hearing it (not very academic, is it?) . . . and to accuse me of being ignorant of historical truths that he explained to his readers. He also accused me and other creationists of believing things that neither I nor any other informed creationist believes.

Now, had he listened to my lecture, he would have heard me teach the truths that he disrespectfully accused me of not knowing. I shudder to think of all the misrepresentations (and worse) and character assassinations that come out of his mouth in his university courses as he proclaims that evolution is fact and creationists are dangerous idiots. We are seeing the atheists get more vicious in their ad hominem attacks on creationists, and we expect it to continue. Evolutionists can’t defend their position scientifically and philosophically, so many of them resort to emotional name-calling and other unscientific and illogical tactics. For our part, we must fear God rather than men and love our enemies by doing good to them as we have opportunity and by praying for those who persecute us.

Recently the more civil atheist Dr. Eugenie Scott, who is head of the evolution-protecting National Center for Science Education, told her fellow evolutionists how to stop the criticisms of evolution by creationists and proponents of Intelligent Design from having an influence in our schools: “Ultimately the solution to this problem is not going to come from pouring more science on it.”  Instead she advocates political and legal efforts.

These approaches, illustrated and advocated by two of the leading evolutionists, should be sufficient to tell any thoughtful person seeking truth that molecules-to-man evolution is false.

The book Already Gone has only been out a few months, and it is already in its fourth printing—and the praise for it continues to pour in from people who are being helped as they attempt to stem the tide of having so many young people leave the church when they turn 20.

Mike Riddle returned from Colorado a few days ago with some good reports about my new co-authored book. Mike met several people who had been to our Creation College 3 conference last month and had given Already Gone to their pastors and others. One pastor read the book and said, “Let’s get someone in here to teach our kids!” The headmaster of a Christian school said that before he even finished reading the book, he called the Bible teacher and said to scrap what they were planning for the year and teach apologetics instead.

(Psalm 24:5) He shall receive the blessing from the LORD, and righteousness from the God of his salvation.

What we lost and were in desperate need of was a righteousness to save us from the hell we deserved; we got covered in the righteousness of the Lord Jesus. Thanks for stopping by and thanks for praying,

Previous Article Bott Here to the Museum Next Article While I Was in Japan . . .