At the beginning of our new book Already Gone (now 50,000 in print), we include photographs of churches in the United Kingdom that have been turned into such things as a nightclub, Sikh Temple, etc. This, sadly, is the picture all across Europe and the United Kingdom as the Christian fabric in those countries has all but collapsed and church attendance is woeful.

At the end of the book, I include similar sorts of photographs from the New England states in the USA—yes, sadly, the same sort of thing is happening in America. This week, we saw a real estate advertisement for a church for sale in the San Fransciso area. The advertisement stated:

It’s St. David's Charismatic Episcopal Church, one of about 40 houses of worship now on the market throughout the Bay Area. As congregations shrink, many are trying to sell their real estate holdings. But selling a church presents special challenges.

What a sad comment on the church in the USA. You can see the advertisement here (off-site link).

Many reviews/advertisements for the book Already Gone are now appearing on the Internet, as the book continues to sell very strongly—and we are already seeing a number of churches taking the research to heart and making changes. Here is an excerpt from one review/endorsement I saw recently:

For years I have noticed that the churches I have been a part of have regularly been losing their children sometime around upper high school and especially after high school graduation. It was so noticeable in recent years that I pointed it out to church staff and questioned some of the activities and teaching directed toward the youth. Needless to say that didn't go over well. My older two children left Sunday School as middle schoolers but not to leave the church. They both independently at a certain point pointed out that the Sunday School was nothing more than the same stories over and over and they weren’t learning anything.

My daughter was also bothered by the rude way the Sunday School children treated the teacher. Both my children found jobs in the church that took the place of Sunday School for them. Either doing the sound, working with the baby nursery, or playing instruments for the service took the place of the typical insipid Sunday School material. They both loved their Sunday School teachers but not the lesson material. Presently we are worshiping in churches where we can worship together as a family with more serious Bible study. Well here is more research to point the problems we found even better than I could to others.

Ken Ham from Answers in Genesis has written a book called Already Gone: Why your kids will quit church and what you can do to stop it. This book looks at the way the church is losing their youth and why. The idea of Sunday School isn’t lost, but we need to look [seriously] at what is being taught. Our children deserve more than watered-downed, warmed over “milk”[;] they need the “meat” of the Scripture or they will never grow. Imagine feeding your children just a diluted bottle until they are teens!”

You can read the entire entry here.

You can obtain single and discounted bulk copies of Already Gone from the AiG online bookstore.

Pastor Dick Brown from Indiana had his entire family (including 11 grandchildren) at the Creation Museum for a family reunion on Monday.

Dr. David Crandall, head of AiG WorldWide, is a longtime family friend and was asked to join in their family photo (he stands at the far left). 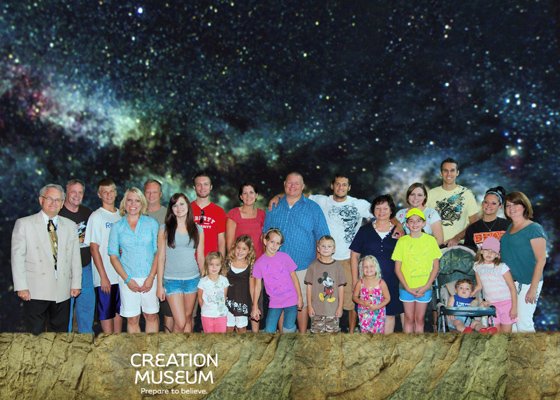 This year, we were thrilled to have recording artist John Elliot at our Creation College conference. John (who writes lyrics and music and is a very accomplished pianist) led times of worship and sang solos. As Christians, we make no apology about the fact we stand unashamedly on God’s Word; we also wanted to insure the conference included times of praise and worship to our Creator and Savior. Here is some feedback we received concerning John Elliot’s participation:

I just want to say that I thought John G. Elliott added a wonderful component to Creation College this past week. I stood at the back a few times and watched people and their actions and their involvement. (The danger in a conference such as this one, as we all know, is the feeding of the mind with facts). I think that involving people’s affections and actually bringing them into the worship of the Creator that we are talking about is a key element in creation ministry and makes for a successful conference all around. It causes people to go away edified, up-lifted, and spiritually satisfied. I think that John brought in that element so much better than any we have had up to this point.

John’s CDs were very popular (my wife and I have quite a collection now). You can find out more about his ministry on his website.

Speaks to his friend

(Exodus 33:11) And the LORD spoke unto Moses face to face, as a man speaks unto his friend.

When the Lord Jesus Christ became our personal Savior, He freed us from distancing formalities of tradition and opened the door for us to be His friend. Thanks for stopping by and thanks for praying,

Previous Article Newest Addition to Petting Zoo Next Article Guess What Is One of Time Magazine’s 50 Authentic American Experiences for 2009?