They are coming from all over the world to visit the Creation Museum. This past week, a couple drove their car all the way from the Yucatan Peninsula (through Mexico) up to the Creation Museum! They had heard about the Museum and made the special trip to see it.

I have also included a photograph of a family who came from Hamburg, Germany. They said they heard about the Creation Museum a year ago and decided they must visit. Now they have. 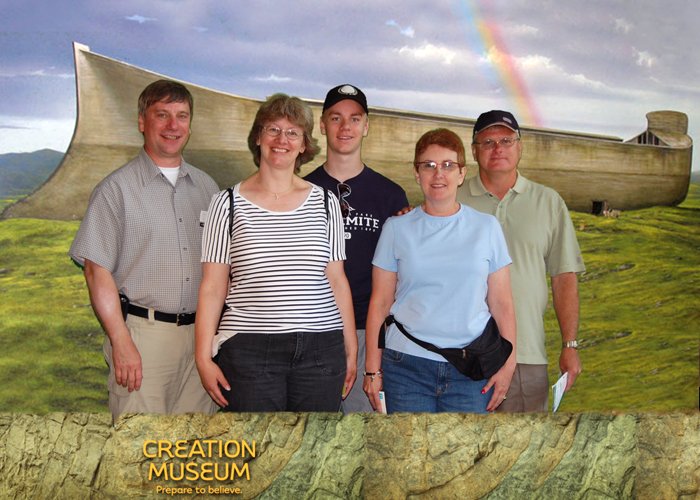 It is common to see license plates from around 30 different US states in the parking lot at any one time. Also, we are finding Canadians visiting on a regular basis.

By the way, considering the Creation Museum saw over 400,000 visitors in the first 12 months of operation—and numbers of visitors are still on a par with last year’s numbers—it was interesting to read an article by a large research firm that stated:

The number of visitors varies substantially by institution type. Zoos typically have 500,000 annual visitors; science museums 180,000; botanical gardens 120,000; childrens museums 85,000; and art museums 60,000, according to the American Association of Museums. History museums have the lowest annual attendance, about 15,000.

AiG staff had occasion for a special cake and ice cream time to bid farewell (well, sort of) to a very valued member of the staff—Paul Varnum. Paul came to AiG a number of years ago and took the video department to a much higher level. Recently, Paul’s wife was offered an opportunity as principal of a school in Colorado—something she had been looking at for some time. Paul and his family decided to move to Colorado, but Paul will continue close contact with AiG. He will be a part of our India trip in August when six of my talks will be videoed in that country. Paul will also be involved in other AiG projects. Even though we hated to see Paul leave (and he hated to leave), we are thrilled for Paul’s family and also thrilled that our close relationship will continue. I have enclosed photographs of Vice President Dale Mason (at left) and myself as we spoke about Paul at the special gathering. 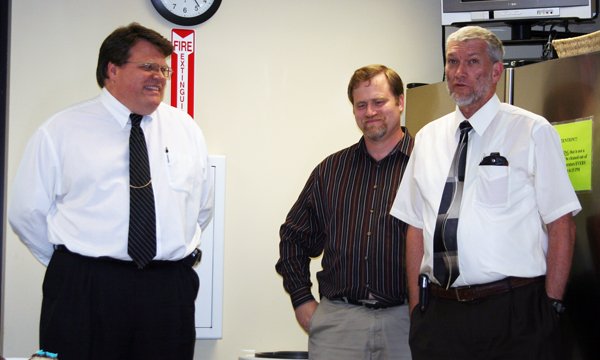 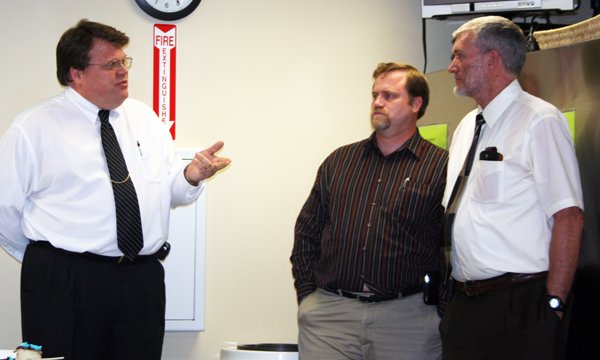 As part of our web outreach, we have put a number of our books up online as we make the chapter of each book available in a series. Here is a response from the latest book online (How Could a Loving God?):

Thank you for publishing your online book about suffering and why it happens on the internet web site. I have been suffering with Lyme Disease for 10 years - and I'm only 22. It has helped answer many questions I have had about sickness and suffering. I am so thankful you posted the book on the internet. It has renewed my hope. I have been a longtime supporter/user of your ministry. I have used your resources to combat much of the stuff I learn in college.

Some of you may have heard of Michael Dowd, who describes himself as an “evolutionary evangelist.” He even visited the Creation Museum (and was very gracious as he spoke to one of our scientists).

The New York Times (in the Sunday Magazine) did an article on Michael Dowd. They called me for an interview to comment on what Dowd believes. Here is the quote (which is accurate) they printed on me in the article:

Ken Ham, who conceived the $25-million Creation Museum in Petersburg, Ky., avows that Dowd’s evolutionary gospel is of no religious value because it does not provide any of the answers that people want from religion. “What’s his message?” Ham asks. “Who is God? Is the universe God? What is our purpose and meaning? What is good and evil? Who determines our future? The Bible gives us very specific answers.” Ham says that what Dowd is telling his audience is “no different from what an evolutionary atheist would preach” with some of Dowd’s merely subjective feelings “mixed in.”

You can read the entire article at: “Darwinists for Jesus.”

I am writing this just before leaving to begin our speaking engagements in Peoria, Arizona (part of the Phoenix area). I speak twice tonight, and three times tomorrow. Dr. Tommy Mitchell and Carl Kerby will also be speaking in satellite churches associated with the main church that asked us to do this program.