Now that the Creation Museum has given Answers in Genesis a much higher public profile, the attacks on this Bible-centered ministry have—not surprisingly—been on the increase. They take on a variety of forms, but one of the most unusual came last week when a young man by the name of Justin decided to challenge the legitimacy of the credentials of those on our staff—plus those scientists who are listed on our website and have some affiliation with us (e.g., as adjunct speakers, part-time writers, etc.).

AiG CCO Mark Looy spoke with him over the phone. This is what Mark told me about the conversation.

Mark asked Justin if he had any hint that there could be something fraudulent about the academic background of the scientists we list, and the young man was at first hesitant—you see, on a voice mail he left earlier, he indicated that what we posted on our site might be “fabricated” about our “supposed” scientists and thus we might have “lied” (to use his words). He told Mark that he had caught the intelligent design think tank the Discovery Institute misrepresenting the claims of some of its scientists, and he alluded to the Institute for Creation Research doing the same thing. Mark pointed out that just because one organization might have a problem (although he quickly added that he didn’t know of any problems related to the Discovery Institute or ICR), that this doesn’t mean that AiG should be painted with the same brush. Our staff have legitimate doctoral degrees.

After becoming semi-convinced that Mark was telling the truth about the scientists mentioned on our website and their qualifications, Justin decided to switch tracks and said, “Well, getting a PhD nowadays doesn’t mean all that much.” He then proceeded to ridicule ICR by saying that its graduate school is not accredited. Mark pointed out two things: ICR has been accredited (by an agency called TRACS), and that ICR has several PhD scientists on staff. The man again insisted that ICR has not been accredited. (The ICR-GS has also been operating under California approval and issuing master’s degrees, but when it moved to Texas earlier this year, the state denied it approval to issue science education degrees, and now ICR hopes that the Texas ruling will be reversed and once that issue is settled, ICR will apply for accreditation from a regional accreditation agency.) Mark also pointed out to Justin that to be accredited, you typically have to have several PhD's on staff, but Justin kept arguing that having a PhD was not important. So which was it—important or not important to have PhD scientists?

Justin insisted on Mark giving him the contact information for all the scientists who are mentioned on our website so that he could question them (Mark would say it was really to “interrogate them”) about their credentials and their scientific research. Mark indicated that this man could do so himself, and because he questioned the academic credentials of the ICR scientists, to be in contact with them. When Mark mentioned that Dr. Steven Austin, a geologist with ICR, has published many papers in science journals, Justin shot back that he couldn’t locate any record of that. Because Justin could not find them, he assumed that Dr. Austin was not a “real” scientist. Mark insisted that Justin hear from ICR before coming to his conclusion.

Given the young man’s bluster and anger over the phone, Mark simply said that the conversation (after 10–15 minutes) was over, and Mark thanked him and then hung up the phone.

Such incidents make you wonder why some evolutionists can become so heated about the origins question. This young man obviously had his mind made up, had determined that the creationists mentioned on our website did not have real degrees (eventually backpedaling a little from that), and ultimately insisted that creationists can do no good research.

Rather than getting upset at people like this, we should pray for this young man in Virginia, that his hard heart will become softened and he will eventually recognize that the Bible is true from the very first verse—especially its gospel message.

AT THE RACES IN KENTUCKY

Teri MacDonald has been one of the few woman drivers in the auto racing world. A former NASCAR driver, Teri is a good friend of the AiG ministry. She has even spoken to the staff (through the invitation of AiG speaker Carl Kerby). So when there was a NASCAR race a few miles south of AiG’s headquarters in Sparta, Kentucky, at the Kentucky Speedway, she offered some of our staff the opportunity to see the race as her guest and to cheer on car #81—driven by D. J. Kennington—owned by Teri's family (MacDonald Motorsports is the company name).

Last Saturday was the race day, and it also happened to be the 21st birthday of Jon Looy, son of Mark Looy. Jon is an avid NASCAR fan. He was surprised on his birthday with a pit pass to go onto the infield and next to the track to watch all the activity in the pits (as tires were changed, cars filled with gas, etc.).

Mark told me that it was an exciting evening (over 73,000 people were there), especially when Jon's favorite driver (along with Jeff Gordon), Kyle Busch, was challenging the eventual winner (an 18-year-old driver, by the way!) but hit the fence towards the end of the race. (The photo shows the damaged #18 car parked at the Busch garage—Busch was unhurt, and raced the next day in Michigan, I'm told.) The other photos are of Jon—taken as he was watching Busch pit earlier in the evening. 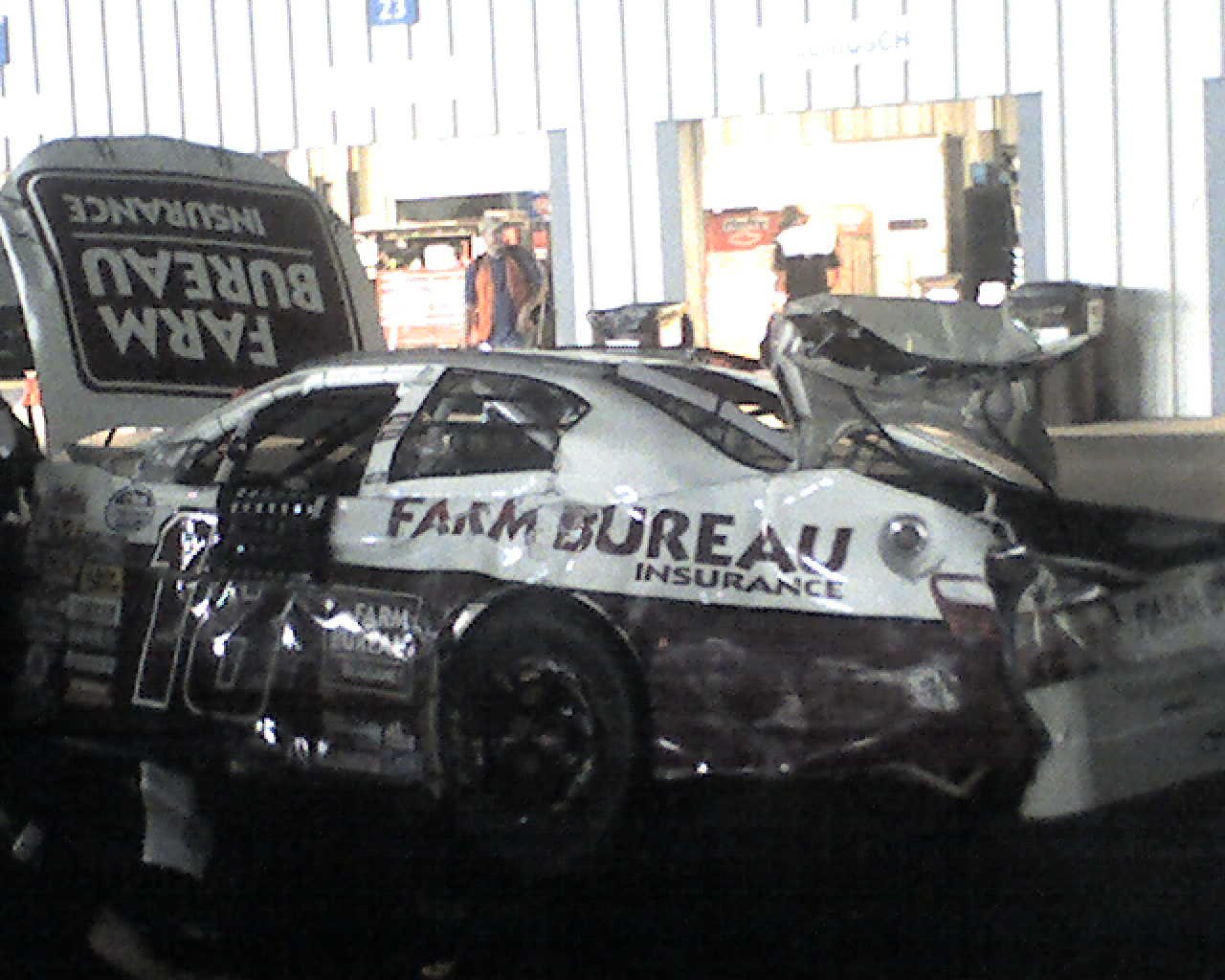 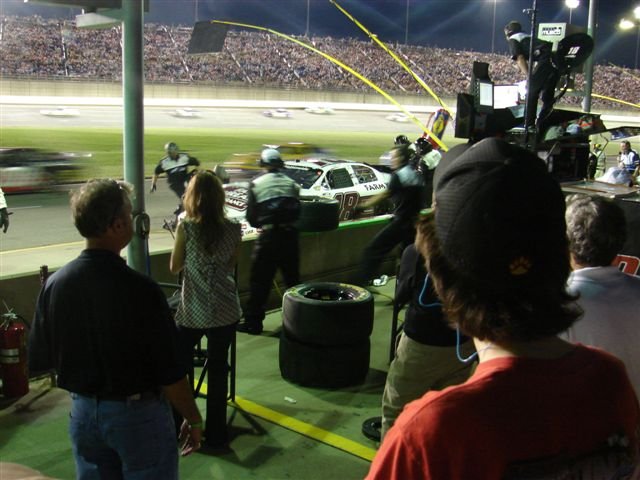 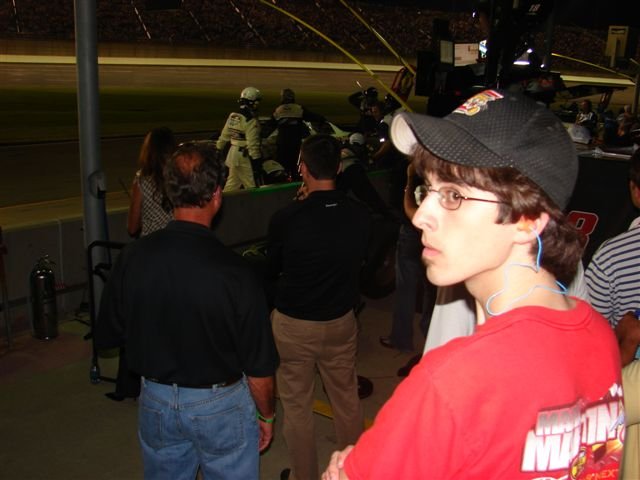 AiG friends are continually opening doors for some of us to enjoy such special blessings. Thank you, Teri.

(Isaiah 50:6–7) I gave my back to the smiters, and my cheeks to them that plucked off the hair: I hid not my face from shame and spitting. For the Lord GOD will help me; therefore shall I not be confounded: therefore have I set my face like a flint, and I know that I shall not be ashamed.

The Lord Jesus Christ set himself like a rock for us to be the willing sacrifice trusting the Father to bring a great outcome. What are we willing to be for Him? PHOENIX

By the time you read this blog I should be in the Phoenix area ready to speak six times Saturday and Sunday. Dr. Tommy Mitchell and Carl Kerby will also be speaking at satellite churches. All told, we should reach around 12,000 people for the weekend!