Philadelphia Going All out for Darwin, New York Times Reports

Today’s (Monday) New York Times is reporting on a number of secular academic institutions that will be going all out for Darwin in 2009. This is just one such event in what we expect to be a major thrust by evolutionists in that year.

We have predicted for some time that evolutionists will treat this next year like a religious festival with a fervor for supporting Darwin as never seen before. We are now already starting to see organized Darwin events. Some groups even call for a global Darwin holiday. It is as if they are treating Darwin as a “god” and worshiping at the altar of evolution.

The New York Times article specifically reported on what is happening in Philadelphia. The reporter did call me for an interview and quotes me relatively accurately in the article.

PHILADELPHIA — In the long-running culture war between evolution and creationism, Philadelphia is firing the latest shot.

Nine academic, scientific and cultural institutions around the city are holding a Year of Evolution, a series of exhibitions, seminars and lectures to celebrate the 200th anniversary of the birth of Charles Darwin next February, and the 150th anniversary of the publication of his seminal work, “The Origin of Species.”

. . . The intent of the citywide event, said Janet M. Monge, one of the organizers, is to increase public understanding of evolution and science in general at a time when polls show that a majority of Americans believe God created man in his present form and that the number of people who accept the evolutionary model of human origins is declining. . . .

She said the Philadelphia events were also intended to encourage people to consider the evolutionary alternative to the biblical account of the origins of man, as represented by the new Creation Museum in Petersburg, Ky., a $35 million institution that has attracted more than 400,000 visitors since it opened in May 2007.

[KH COMMENT: This is a remarkable statement considering secular museums across the country and around the world, using billions of dollars of taxpayers money, have been promoting evolution as fact for years. To say that one Creation Museum has caused them major troubles, I guess, is a “feather in our cap.”]

Ken Ham, the president of the Creation Museum, said he expected to see more pro-evolution events as the Darwin anniversary approaches. Mr. Ham said that in response his museum was planning its own exhibits on the origins of life.

“The culture war is definitely heating up,” he said.

Mr. Ham, who also leads Answers in Genesis, a nonprofit group promoting a literal interpretation of the biblical creation story, defined the clash of ideas as “Christianity versus the relative morality of secular humanism” and said they were “two fundamentally different worldviews.”

. . . In Philadelphia, organizers of the Year of Evolution want to promote the concept in Darwin’s anniversary year but have no interest in picking a fight with Christians who do not accept it, said William Y. Brown, president of the Academy of Natural Sciences, a participating institution.

“We will try to find ways of persuading people that it’s not in conflict with their faith,” Dr. Brown said.

[AiG has many articles on its website pointing out that many Christians do believe in evolution, but they cannot believe in evolution and take Genesis as literal history, as the two are in total conflict: Genesis teaches man was made from dust and woman from his side (as quoted by Jesus and Paul in the New Testament), whereas evolution teaches man came from an ape-like ancestor and woman came from an ape-like ancestor. Evolution requires millions of years of death and disease before man evolved. Genesis teaches death and disease came after the first man sinned.]

You can read the entire New York Times article at:

The East Valley Tribune newspaper reported on our speaking engagements in the Phoenix, Arizona area. The report states:

Ken Ham, who travels widely as the founder and president of Answers in Genesis and the creation museum in Cincinnati, will speak at the four weekend worship services today and Sunday at Christ’s church of the valley. . . . [T]he native Australian, who has authored many books and who hosts the radio show “Answers … with Ken Ham,” heard on more than 900 stations in America and a dozen overseas, also will speak at two afternoon sessions.

On the East Valley Tribune website, people logged on to make comments about this article. One stated:

laughed out of Australia and now here to spread their illusions to the uneducated here in this country. pitiful! just plain pitiful!

Notice how evolutionist critics rarely use the facts of science to discredit what we say—just personal attacks. I guess that’s all you can do when you don’t have the logical scientific arguments to use—you just call people names. So, the entire 12,000 people we spoke to this weekend are all “uneducated”? What an ignorant–and frankly silly—statement!

Ken Ham's anti-science “museum” is not actually in Cincinnati, but in rural Kentucky

Actually, the Creation Museum is in what is called “The Greater Cincinnati Area,” at an interchange on Interstate 275 that loops the entire Cincinnati Area. Cincinnati’s major international airport is actually in Northern Kentucky, just across the river from Ohio (and only 7 miles east of the Creation Museum on the same Interstate) but considered to be part of the Greater Cincinnati area. Northern Kentucky is a major developing area for businesses, homes, etc. It is so typical of people who hate the message of Christianity to attack in emotional ways that imply untruths and cultural slanders. The person’s comment above was made to make people think that the Creation Museum was in some undeveloped (i.e., backwards), rural area of Kentucky!

You can read the entire article and comments at this link:

By the way—a great response on Saturday night—lots of visitors for both services. I received great feedback from people who spoke to me, including one man who explained it was our ministry the Lord used to bring him to salvation.

Lastly, I have included a couple of photographs of two of our sculptors working on new displays for the Dragon Hall Bookstore in the Creation Museum. 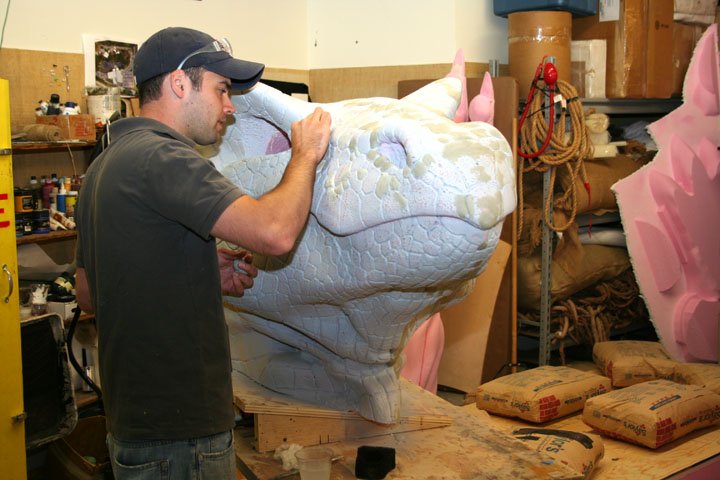 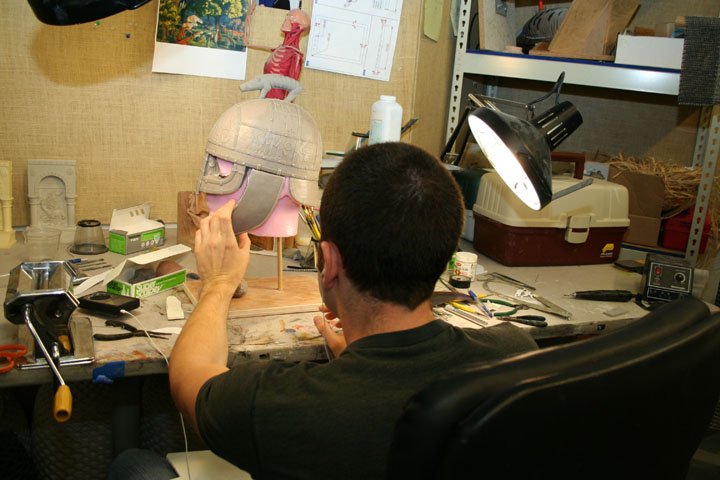 Previous Article They Keep Coming Next Article Is There More Than One Way to Heaven?