Although there is still more we can (and want to) do in this regard, the Creation Museum is very “deaf friendly.” A number of deaf people (including many non-Christians) have visited the Creation Museum. They experience Bible history as they walk through—they can read the signs—and they can watch most of the videos, as they have the scripts on the bottom of the screen for them to read.

It was thrilling on Saturday to meet a number of folks from two deaf churches. Although these are not all the people in the groups, I have included two photographs I had specially taken for my blog:

Miami Valley Baptist Church for the deaf from Dayton, Ohio; The pastor (beside me in the red shirt) is Pastor Mark Korf. 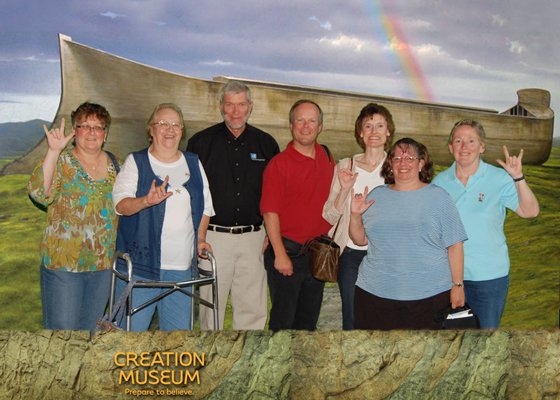 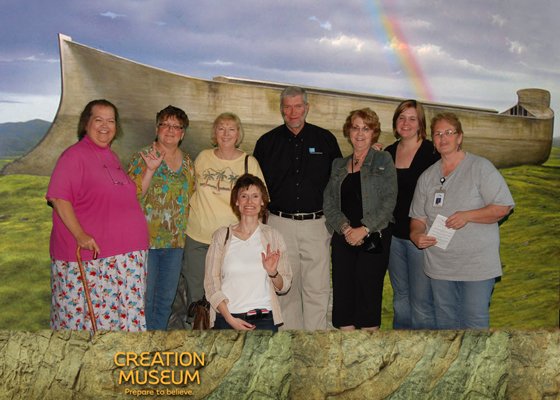 I really wish you could all be there as people come up to me at the Creation Museum. On Friday/Saturday (we had 2,300 visitors on Saturday, by the way), just some of the testimonies I received included:

I have included a photograph of Buddy Davis with his Dinosaur puppet Levi. Levi is a real hit when Buddy walks around the museum with him.

I have also included a photograph of Mally and me with our youngest daughter (and youngest child) Kristel. She is home from college for the summer break. 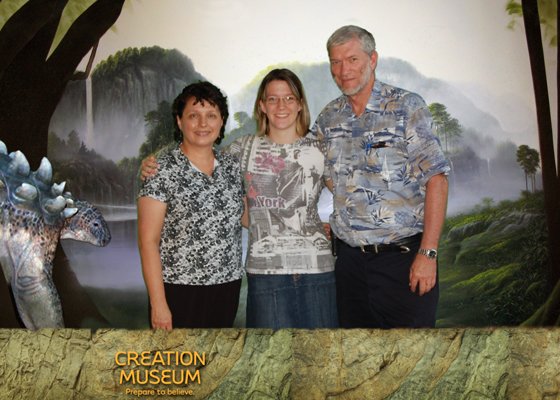 There are also two photographs illustrating the types of family photos that are very popular with Creation Museum visitors (through the FotoFX booth in the portico). 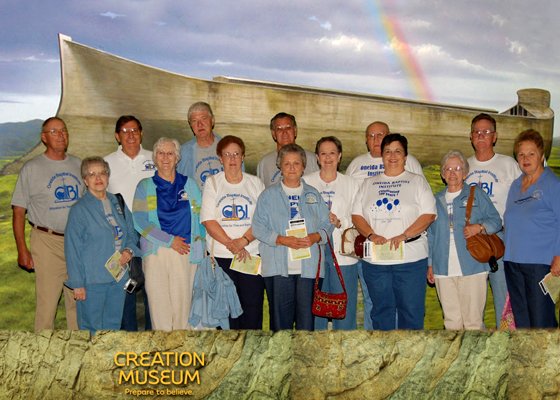 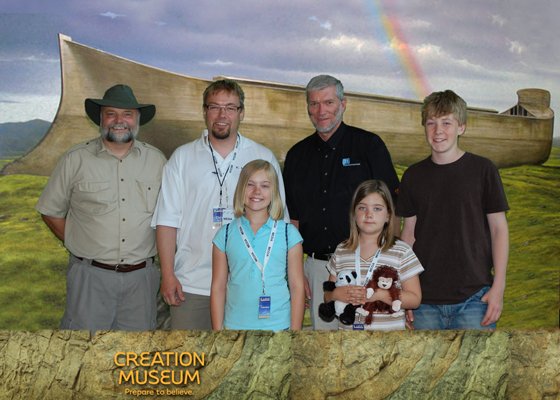 The Star—a major newspaper in Toronto,  Canada (which claims to have the largest circulation in the country)—carried a substantial article about the Creation Museum. The reporter, who tried to be “cutesy” in the way he wrote it, sounded as if he had visited the museum (we still get media visiting on a weekly—sometimes daily—basis).  For a secular Canadian paper, the article is reasonable—not like a previous Canadian newspaper column that mocked and attacked the whole way through the article.

The Star report starts this way:

Let there be animotronics . . . And The Creation Museum had the Boone County Planning Commission approve 663 more parking spots. And where once the Earth was formless and empty, there was now sufficient room for the tour buses and the RVs.  And the museum saw all that it had made. And it was very good.  A year ago, they laughed at Answers in Genesis chief executive Ken A. Ham and his $27 million, 20-hectare paean to the Genesis story of how God created the heavens and Earth in six days some 6,000 years ago. But when The Creation Museum celebrated its first anniversary this week, it had already welcomed its 400,000th visitor– 100,000 more than anticipated.”

LOSS OF STATURE IN THE WORLD OF SCIENCE

A recent headline in a Washington Post article stated:  “U.S. Experts Bemoan Nation’s Loss of Stature in the World of Science”

The article then stated:

Some of the nation's leading scientists, including Secretary of State Condoleezza Rice’s top science adviser, today sharply criticized the diminished role of science in the United States and the shortage of federal funding for research, even as science becomes increasingly important to combating problems such as climate change and the global food shortage.

Speaking at a science summit that opens this week's first World Science Festival, the expert panel of scientists, and audience members, agreed that the United States is losing stature because of a perceived high-level disdain for science. They cited U.S. officials and others questioning scientific evidence of climate change, the reluctance to federally fund stem cell research, and some U.S. officials casting doubt on evolution as examples that have damaged America's international standing. Isn’t it interesting, at a time when evolution is taught as fact more than ever before, and at a time when secular courts are being used to protect the teaching of evolution in schools and not allowing students to even question it—at a time when the textbooks are more blatantly evolutionary than ever—and at a time when there are more evolutionary TV programs and more evolutionary books than there has ever been—the secular world is blaming “casting doubt on evolution” as having “damaged America’s International standing” in regard to science?!! They should be looking at the non-critical way they teach evolution, the loss of academic freedom, and the rejection of Christianity from schools and colleges as they ponder this problem!!

We walked through the gardens before the museum opened and loved it. My husband said the quality “really sticks out in a good way.” From what we had heard, I’ll admit I was expecting top quality, and I was not disappointed . . . . I was choked up at the planetarium show, The Created Cosmos, which we went to first. What an awesome God . . . . We pretty much read most of the signs (skimming over some) but didn’t get to watch all the videos. We did watch all the “major” videos. You were right about not being able to see everything; so we bought the set of museum DVDs, along with the planetarium DVD.

I think one thing that impressed me the most (because of being an editor, I guess) is that your signs managed to give excellent summary points about things that books are written about. The wall displays on major issues, such as the “God’s Word has triumphed against every attack” display, were just great. I can’t even imagine having to take so much info and so many pictures and condense all that to something people will take the time to read while moving from room to room. I would say that was one of the best features of the museum that’s probably overlooked because of the more “visual” elements, such as the fantastic dinosaur models.”

And yes—this visitor is coming back (and bringing others).

Previous Article Our New Zonkey! Next Article From a Feminist Atheist into a Born-again Christian