The lead article on our website today (Thursday) by Mark Looy gives more information about the coming Expelled movie we are encouraging all our supporters to see.

Two of the better-known challengers of the evolutionary belief system met in Nashville, Tennessee, on Tuesday to discuss ways that the upcoming movie Expelled: No Intelligence Allowed can have a major impact on the creation/evolution debate.

Expelled is hosted by the brilliant Ben Stein, actor/economist/lawyer/presidential speechwriter/science observer—a 21st-century Einsteinian figure. While his film arrives at American movie theaters on the weekend of April 18, Mr. Stein came to Nashville for a special preview showing of Expelled for several hundred attendees at the annual convention of the National Religious Broadcasters (NRB). The audience leapt to its feet with generous applause at the film’s conclusion . . . . Go to AiG’s website to read the entire article. 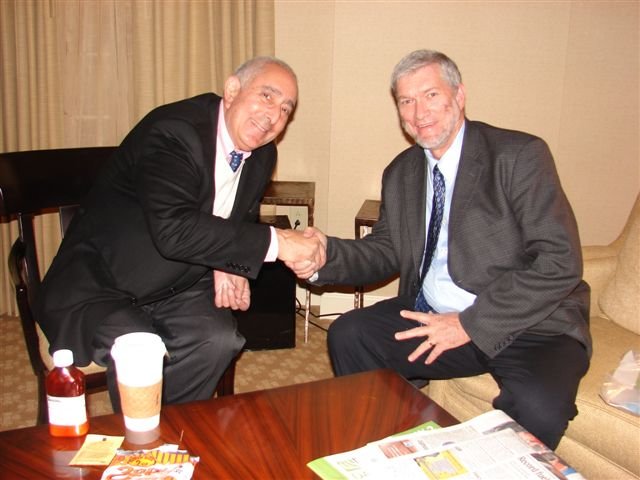 Here is a news release about this event:

Ken will be the guest speaker at KEEN 17 Christian TV Media Fellowship on Wednesday, March 19th from 11:30 AM-1:00 PM. The location is the Las Vegas National Golf Club at 1911 East Desert Inn, and Ken will be speaking on “Understanding the True Nature of the Creation/Evolution Issue.” A delicious buffet lunch is provided and included in the $25 admittance. Call and reserve your spot today, as 75 people is the cut off. Call Darlene Bates at KEEN TV at (702) 636-1717 or e-mail at dbates@tln.com.

I really am starting to feel my age! I have had a lot of people in recent times tell me they remember coming to a program as a youngster where I taught them to ask (when confronted with millions of years/evolution), “Were you There?” based on Job 38:4. I’m feeling my age because many of those giving me such a testimony are now married—and with children of their own!

It was thrilling to receive this feedback after the recent NRB conference:

. . . I just came back from the National Religious Broadcasters conference in Nashville. I helped lead the Sunday morning worship service with Dr. Stephen Newby’s band, and while we were singing, I noticed Ken Ham in the audience. I was immediately brought back to the AiG sessions that I attended with my small Christian elementary school in Oregon. I still distinctly remember the dinosaur pictures and the question Mr. Ham kept asking in his Australian accent: “Were you there?” Just a little note to say that even as a youngster, Mr. Ham’s message and the way he presented it made an impact.