Although World War II is long over, bombers still patrol the Atlantic skies. They outmatch anything humans have ever engineered. With unruffled ease, they crash into the sea at breakneck speed, swim to their objective, and then fly away.

On a June morning in the North Atlantic, a shoal of herring rises near the surface, unaware of danger. Yet many will not see another day, for high overhead appears a flock of large, white-plumaged birds with splashes of jet black on their wing tips. These are northern gannets. They are hungry, and their chicks are impatiently waiting for food 40 miles (64 km) away on a remote Canadian island in the Gulf of St. Lawrence. The capabilities of these seafaring dive bombers are unmatched in the animal world.

Every year more than 50,000 pairs of gannets converge on the small island of Bonaventure, located 2 miles (3.5 km) off the coast of Quebec’s Gaspé Peninsula, to breed and raise their ravenous young. They literally cover the island, each pair nesting within pecking distance of their neighbors. This species’ base of operations extends to other offshore islands and inaccessible cliffs, from Canada’s Newfoundland coast to France’s Brittany coast and all the way to Norway.

Northern gannets typically hunt for herring or mackerel in large flocks, sometimes 1,000 birds strong.1 Their white underparts camouflage the squadrons from their prey below, but the gannets seem to have no problem spotting the fish. Their eyes are positioned right beside the bill, which gives them binocular vision, vitally important in calculating distances and pinpointing their prey.

One by one, they position themselves in the air for the spectacular, bullet-like dive they will perform. When so many birds plummet into the water at the same place, it causes great confusion in the shoal of fish, making it much easier to catch prey than if one bird were foraging alone.2 In preparation for the dive, gannets often hesitate for a split second before tipping steeply into their vertical plunge toward the water. If necessary, they will occasionally accelerate with power strokes of their long, narrow wings. They hurtle down, often adjusting direction in response to the fishes’ movements. Splash, they plunge into the water like bullets, with their wings pushed back and parallel to their body, traveling in excess of 60 mph (100 km/hr).3

How do gannets avoid injury when they plunge into the water at such great speed? For one, these aerodynamic marvels possess highly developed air sacs (extensions of the bronchi) that help minimize the impact. Their long, oval-shaped bodies are also designed to enter the water with the least resistance, like well-trained Olympic divers. Their external nostrils are permanently closed, but they have secondary nostrils beside their mouth, which movable flaps cover automatically whenever they plunge into the water.4

Once underwater, the birds’ wings and webbed feet propel them in their further chase for food. The force of the dive alone can send them as deep as 10 meters (33 feet).5 The gannets’ conical bill is a fish-grabbing marvel—long and stout, tapering to a point with serrated edges. They usually swallow the fish underwater to avoid harassment by other seabirds, such as skuas and gulls, who would love to steal their catch, a phenomenon known in the bird world as kleptoparasitism.6 This drama is played out throughout the summer, as the adult gannets forage to feed themselves and their fast-growing young in the nest.

Living at sea presents some day-to-day challenges, but the Creator has designed them to meet these needs.

Once the five-month nesting season is over, they will go out to sea for the next seven months. The ocean is truly their home. Living at sea presents some day-to-day challenges, but the Creator has designed them to meet these needs. They can ride out the severest winter storms, resting and swimming on the surface of the water. A gland at the base of their tail provides oil, which they apply evenly over their feathers with their beaks to make their feathers waterproof. They can also fly in high winds with their powerful, six-foot (183 cm) wingspan, sometimes using dynamic soaring to save energy and stay aloft.7

Another challenge is their need for fresh water. God equipped seabirds, including northern gannets, with special salt glands located above their eyes. These glands filter out the salt that builds up in their blood. The salty solution trickles out of their nostrils. Several organs work in concert to transfer the salt from the blood to the glands and out the nostrils. This process is so complicated that it never could have evolved. If just one step were eliminated, the whole process would break down.8

A much more compelling explanation of the origin of northern gannets and all birds is found in Genesis 1:20– 23: “Then God said, . . . ‘Let birds fly above the earth across the face of the firmament of the heavens.’ So God created . . . every winged bird according to its kind . . . . So the evening and the morning were the fifth day.” 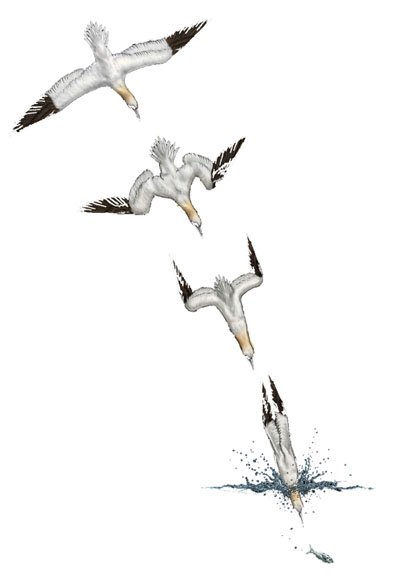 Dual Designs to Fly Then Plummet

Donna O’Daniel earned her MA degree from the University of Texas (Austin) in biological sciences. She has worked as a wildlife biologist on Johnston Atoll, the Northern Marianas, Madagascar, and in numerous American states. She has also lectured on seabirds and sea turtles.
Previous Article Friendly Viruses Next Article Every Mormon’s Need for Rest