We often associate “common” with “ordinary.” But there’s nothing ordinary about pigeons.

What comes to mind when you think of pigeons? Probably flocks of cooing birds bobbing about city sidewalks. They seem to be everywhere, leaving their marks on public buildings and statues. Because of their droppings and fear that they carry diseases, they’re even called flying rats! But lest we judge them too quickly, we should take a closer look at the wonders the Creator bestowed on these intelligent, beautiful—and extremely useful—birds, which have blessed human civilization since the beginning.

Humans have domesticated pigeons for thousands of years. References to pigeon domestication appear in ancient Mesopotamian cuneiform tablets and Egyptian hieroglyphs. Today pigeons are breeders’ most popular birds, prized for everything from their homing abilities to the amazing variety of their plumage.

Pigeons’ famous navigational skills have played a major role in human history since at least as far back as the dove on Noah’s Ark. (Pigeons and doves are in the same family; the only difference is that pigeons are usually larger than doves.)

Noah took on board only seven pairs—or possibly just seven individuals—of this bird kind (Genesis 7:3). Noah sent out a dove three times to see if the world was habitable after the people and the animals had been cooped up in the Ark for over a year during the Flood. The dove returned the first two times because the earth was not yet ready to sustain life.

Two thousand years ago, during Julius Caesar’s war with Gaul, Caesar used pigeons as messengers to communicate with his troops. During World War II, British pilots carried pigeons to assist in case their planes crashed. Survivors would attach a note to the bird’s tail feathers and send it home so rescuers could find them.

Over 3,000 US soldiers also used pigeons during the war—54,000 of them—to relay messages in Asia, Europe, and North Africa. A famous American pigeon named Jungle Joe was parachuted behind Japanese lines in Burma to carry messages detailing the positions of enemy guns and troops. These pigeons’ service allowed the Allies to capture much of Burma’s territory.

Today, the descendants of those original Ark doves total 355 species on six continents, including Columba livia, the most common pigeon in cities worldwide. Fanciers (bird enthusiasts who raise or sell breeds) breed them for many different characteristics, including size, shape, color, behavior, and vocalization. In 2006, 33,500 pigeons competed at the largest pigeon show in the world, the German National Pigeon Show in Nuremberg.

The Scandaroon pigeon, one of the oldest breeds, has been bred for its long neck and legs since the time of Alexander the Great. Other common breeds with unusual shapes are the Jacobin, with its exuberant feathered hood; the Frillback, with ornate, curly feathers; and the popular Fantail, which looks exactly like its name. 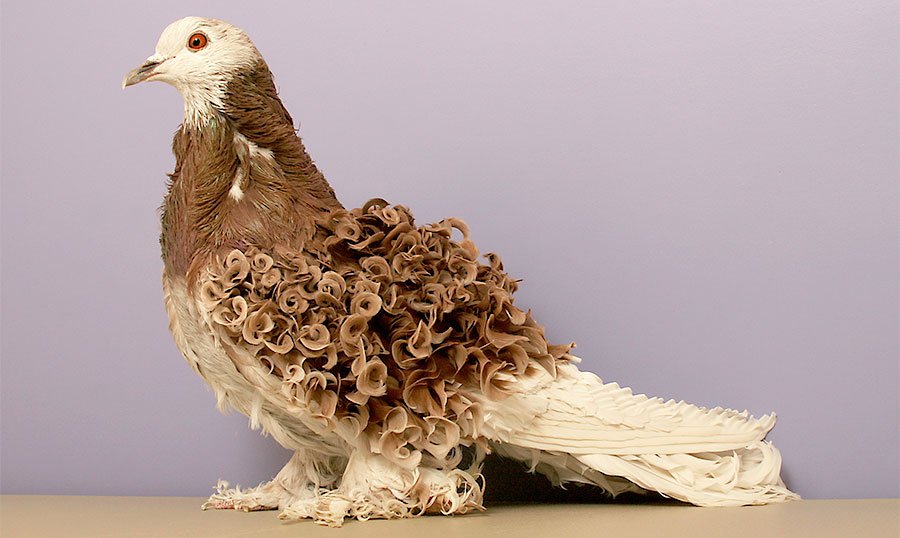 One beautiful variety of domesticated pigeon is the Frillback. The curly top flight feathers and foot feathers make it appear almost lacy.

The variety of color and markings is astounding. The Archangel, with its iridescent, metallic sheen, is one of the most striking breeds. You’ll find variations of silver, black, blue, yellow, red, and brown in the Danish Suabian Pigeon, the Saxon Field, and the Swallow.

With all their fantastic variation in color, plumage, and behavior, these birds are still pigeons. None has become another kind of animal—or even another kind of bird. Even Charles Darwin showed by crossbreeding many different pigeons that within one or two generations the majority of offspring would again resemble wild rock doves but not a completely different kind of bird.

Created to Fill the Earth

The pigeons in our cities and towns are feral descendants of escaped domesticated pigeons that bred with wild rock doves living in rocky cliffs and caves in Europe, western Asia, and northern Africa. These pigeons look very similar to wild rock doves. They have proven their ability to survive near humans by spreading throughout the New World, as far south as Ushuaia, Argentina, the most southerly town in the world. You’ll also find them in towns north of the Arctic Circle.

Clearly, God created the pigeon kind with immense genetic variation not only to survive but to thrive and spread over the entire earth, reminding city dwellers of the Creator’s glory.

Donna O’Daniel earned her MA degree from the University of Texas (Austin) in biological sciences. She has worked as a wildlife biologist in Johnston Atoll, the Northern Marianas, Madagascar, and in numerous American states. She has also lectured on seabirds and sea turtles.
Next Article Rock Garden