This sounds like something out of a horror movie: an extraordinarily intelligent, playful parrot adapts its diet from seeds and insects to red meat. It then preys on weak sheep, tearing and burrowing into the live animal’s flesh to get at its kidneys.

But that’s what naturalists, and graziers high in the mountains on New Zealand’s South Island, say happened around 1900. That was when the kea—the world’s only alpine parrot—was blamed for the deaths of thousands of sheep. 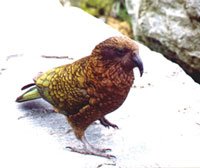 These days considered more playful comic than vicious killer, the kea remains a curiosity. Bold and curious, the parrot has a level of intelligence and flexibility to rival the most sophisticated monkeys.1

Named by the Maori after its exultant cry,2 the bird today is best known as a scavenger at dump sites, and as a destructive pest. It continues to have a remarkably diverse diet that today still includes nuts and seeds, and carrion.

Naturalists believe keas were originally herbivores, like other parrots, and that we can look at their current feeding patterns to help understand the past.

Today the birds spend much of their time in beech foliage—considered to have always been their favoured habitat—roosting in trees, nesting in burrows and taking shelter in thick branches. They forage for hours, using their bills like forceps and grinding and crushing nuts between their lower bill and hard palate.3

Beeches provide plenty of food in autumn, but are not so reliable through the rest of the year. So the kea changes diet to suit the conditions: in spring it digs up mountain daisies, sometimes eating the roots and all,4 and in summer it forages for fruit, seeds and flowers in shrub habitat, lapping up nectar and pollen, and also eating large numbers of grasshoppers and beetles.5

It is in winter, however, when the parrots are forced further afield through starvation, that their diet changes dramatically. As well as scrounging for berries, they seek out animal fat for its high energy, tearing open carcasses to consume meat and internal organs, scraping dried meat from bones and licking out the marrow.6

Naturalists believe it was this scarcity of food in winter that originally led to the kea becoming omnivorous.

The kea, and its brown cousin, the kaka (a smaller bird, more like the typical parrot in appearance), supposedly descended from a forest-dwelling “proto-kaka”. This ancestor supposedly lived about 15 million years ago when New Zealand was a single island.7

Environmental changes then allegedly took place over “several million years” and the repeated fragmentation and unification of the kea’s habitat created a “classic recipe for generating new species”.8,9

Interbreeding parrot populations were separated and subjected to different selection pressures. As a result, new “species” emerged: the insect- and fruit-eating kakas of the rainforests in New Zealand’s north, and the keas in the harsher south.

One thing is certainly true: the kea developed behavioural strategies and food preferences that helped it survive in the snowfields.10 By the late 1800s, it was feeding almost exclusively on carrion, most of it provided by the sheep that had been introduced recently to the South Island high country.11

How did this change take place?

One thought is that it started when sheep carcasses and offal were disposed of in uncovered pits, providing a window of opportunity for a curious bird species with an odd appetite. With no other food around, the adventurous birds might have simply decided to give it a try.

Witnesses in the 19th century des­cribe seeing a kea feeding on a dead sheep’s head: the bird was tearing at the flesh like a hawk, but also holding it down with one foot and grasping the portion with the other, like an ordinary parrot.12

Suspicions of keas “preying” on sheep were confirmed after graziers found wool and raw mutton in the stomachs of birds shot on the sheep runs—shootings prompted by regular sightings of keas clinging to live sheep and pecking at “sores”.13

Stories were soon spreading of the kea’s viciousness, ranging from claims the birds killed 200 sheep in a single night (in 1884)14 to their being responsible for the deaths of 15,000 sheep in a single season.15 Keas were so reviled that it was lawful to kill them and it’s estimated that 150,000 keas were killed between 1868 and the 1970s.16

Naturalists at the time were stunned at how the kea had transformed almost overnight from a peaceful fruit-eater to a dedicated carnivore. Four main theories arose:

The latter is the most likely theory, and has nothing to do with “evolution”.

As settlement in the South Island led to forests being burned, and new plants and animals were introduced into the ecosystem, the keas had to adapt. As sheep began to die in the snowfields, the birds discovered a “lucrative livelihood as scavengers”.19

Judy Diamond and Alan Bond, whose book is extensively quoted in this article, offer the following: “Keas originally foraged on native plants and animals of the alpine environment and scavenged moa carrion. [The moa, now extinct, was a giant flightless New Zealand bird.] When sheep were introduced into the New Zealand high country, keas were probably attracted to them as objects of play—‘woolly toys’ to ride on.20 They fed on dying or disabled sheep or those immobilized in the snow. They viewed sheep as a food source and source of amusement.”21

Now known as the “clown of the mountain”, the kea is today a protected species. It has become a target by poachers eager to sell them on the black market pet trade in Canada.22 In fact, it is believed there are only 3,000 keas left on New Zealand’s South Island,23 its exclusive habitat.

Sheep attacks in the New Zealand high country are uncommon these days. Occasional incidents are still reported, although these most likely involve old or sick animals, or carcasses of sheep that died of other causes. Even so, wildlife offic­ials claim to occasionally still see healthy sheep with kea wounds.24

There is certainly something abhorrent about a parrot—better known for eating seeds and fruit—tearing at the flesh of an animal. Of course, God never intended for parrots—or any animal we now call a carnivore for that matter—to exist by eating the flesh of another creature (Genesis 1:30). It is one of the symptoms of a fallen world.

The kea’s dietary adaptation from herbivore to carnivore/omnivore also illustrates how some of the creatures that are now carnivores could have become so. Of course, the Fall was the point at which death and bloodshed entered the world. But some carnivory may have arisen in this way after the Flood, when habitats changed dramatically—and traditional food sources changed along with them. 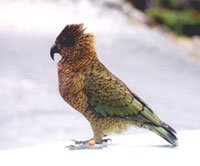 The kea’s beak is its most important foraging tool. It is not sharply pointed like a hawk’s, but rather is narrow and blunt, like a screwdriver, and is used for digging, pulling, scraping, prying, probing and tearing.1

Studies have revealed that the keas are very social, and have a dominance hierarchy based on age and sex classes, with playfulness being an important part of the younger birds’ development.2 Younger birds play aggressively, and adult birds maintain the hierarchy through aggressive behaviour;3 all keas play, almost constantly.

All this play helps the kea maintain sufficient behavioural flexibility to be able to modify its behaviour when faced with new ecological and environmental challenges.4

A taste for blood

China’s Sichuan province is home to the world’s last remaining wild pandas, generally vegetarian. Puzzled researchers were amazed when a panda killed and ate 26 goats before being captured and studied.

A British researcher observed a sheep eating a bird. In behaviour more associated with carnivores, the sheep snatched the unwary grouse in scrubland and proceeded to devour it.