Best Seat in the House

Consider what the fossils really tell us, when we start with the Bible as factual history.

Petrified wood and coal balls (round, fossil-filled rocks found in coal) intrigued me as a young plant researcher. I interpreted them as proof that God used evolution to transform primitive plants into modern plants over vast eons. 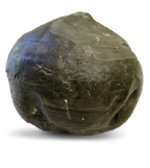 I had been taught that fossils provided a window to the world of the long-lost past. That was before I became a young-earth creationist and delved into the presuppositions underlying evolutionary thinking.

Now these same fossils electrify me!

Consider what the fossils really tell us, when we start with the Bible as factual history. The Bible records that about 6,000 years ago God created the world. It then reports that He catastrophically reshaped the earth’s surface during Noah’s Flood, which destroyed all the land creatures, except for representatives of each kind that were safe on the Ark. 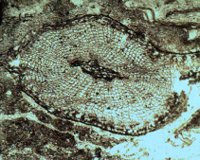 Coal balls can be cut open, etched with acid, and displayed on acetate peels that show fine detail. These cross-sections of the plant material enable scientists to reconstruct the original structure of the tissues in these plants. Photo courtesy Dr. Roger Sanders.

Most coal balls, therefore, appear to be preserved examples of weird pre-Flood plants that occupied what I believe was a strange “floating forest,” unknown to us today. Trapped in these fossils are the original cell walls of the plants that were alive in Noah’s day.

Today Americans are easily impressed by ancient oaks that were alive when the Pilgrims founded Plymouth. But in the pre-Flood world, plants probably had much longer life spans, as did humans. Assuming that plants benefited from the same factors that allowed humans to live much longer before the Flood, it is likely that many of the fossils of pre-Flood trees are the remains of individual trees that God spoke into existence at creation. I am overwhelmed with wonder when I consider that I may be holding in my hand something that God actually created during Creation Week.

My sense of wonder does not end there. Wonder permeates all my research, as I learn more about the diverse species of plants and the marvelous similarities and differences among them. The seemingly endless diversity of living things constantly reminds me about two qualities of God the Creator—His overflowing abundance and His mercy.

I believe that God created and sustains everything with abundance, not just with the number needed for the world to function. Because God created humans to enjoy Him forever, God created a world where the abundance of life would overwhelm us with the joy and wonder of His own beauty, might, and fullness of life (Psalm 8, 65, 104, 150; John 10:10; Romans 15:13; 1 Timothy 1:14).

To see some of this abundance, let’s start with the idea of the original created kinds (which creation biologists call a baramin). If any two species can produce hybrids, we believe they belong to the same created kind.

As someone who studies biodiversity, I am constantly faced with questions about the purpose behind such diversity: Why do we find so many species today in a created kind? How does the genetic information in species today differ from the information that God stored in the original representatives of each created kind that survived Noah’s Flood? Couldn’t God accomplish His design with just one or a few species in each kind? Couldn’t He arrange it so that a few species could spread over larger expanses of the globe and each species occupy a wider range of habitats?

Contemplating the answers is what excites me. God is trying to teach us about Himself. I believe that, through the present pattern of diversity within baramins, God is teaching us about His overflowing abundance.

Besides the number of diverse species within created kinds, some groups have erupted with similar, yet separate, species. Let me illustrate with the blueberry family. Unlike the blueberries familiar to most of us, which have round, whitish flowers, the flowers of species in the tropical mountains are usually red, with long tubes. Common in the Andes of South America, hummingbirds in search of nectar are attracted to long, red flowers. These “firecracker” blueberries feed the hummingbirds, who in turn pollinate the flowers.

Even though their mountain habitat is basically the same everywhere these tropical blueberries grow, the mountains are filled with a multitude of different species. As you travel along the chain of mountains, one species repeatedly replaces another, creating a dazzling array of bizarre, red-flowered blueberries. This is the type of overflowing abundance I see in my research.

This overflowing abundance also reflects God’s mercy ({% scripture "Zechariah 1:16–17, Mark 5:18–20, Romans 9:22–24, James 5:11" alt="Zechariah 1:16–17; Mark 5:18–20; Romans 9:22–24; James 5:11" %}). After Adam’s Fall, human sin increased to the point that God judged the whole earth in Noah’s Flood ({% scripture "Genesis 6:7–8, Genesis 9:15" alt="Genesis 6:7–8; 9:15" %}). Only a handful of individuals from each original, created kind survived as stock for replenishing the earth. Yet in His forethought and mercy, God bestowed the original plants and animals with flexible genetic information. This information, stored in the survivors, could be modified within prescribed limits and expressed in succeeding generations while the descendants multiplied and split up to fill the earth (Genesis 8:17).

The present world is very different from the pre-Flood world. That world had a vast mosaic of exotic habitats, which we find in the fossil record—from the strange floating forests preserved in the coal ball to the gymnosperm forests roamed by T. rex (see “Mystifying Mosaics,” p. 56). It appears that after the Flood, the earth was refilled randomly by whatever combination of plants and animals made their way into the barren landscapes.

The success of this refilling shows how merciful God is. He designed plenty of information into the migrating, diversifying plants and animals to enable them to reestablish fully functioning webs of life, despite the many new and often stressful habitats. Even in modified form, today’s organisms and environments still reveal God’s original plan, where the Creator can be “clearly seen.” It is even possible that the present world, imperfect as it is, has an even greater diversity of flourishing, beautiful species and habitats than the world before the Flood.

Just think about it. God created in such a way that, despite the unparalleled catastrophe of the Flood, His abundance and beauty were restored as survivors replenished the earth. Yet we see this abundance and beauty as mercy, following judgment, only if we trust His Word as true history—it recounts a real Flood that was global in its destruction while God saved a remnant on the Ark.

Researching creation lets the scientist come face-to-face with a God who constantly displays His abundance and mercy, if he has eyes of faith to see. It is thrilling to see (and better understand!) the world through the light of God’s Word and to enjoy the privilege of praising and glorifying God for His work.

Previous Article Do All Creationists Go to Heaven? Next Article Words Are Us