How Bacteria Affect Your Everyday Life

Raise Your Hand . . . If You’re Sure Where You Got Your Microbiome

“Don’t touch that! You’ll soil it.” – Carl Fredricksen in Pixar’s Up

A few years ago, I went to a scientific meeting to present my research. When we got to the hotel, we checked in and discovered that our room was on an upper floor. When we boarded the elevator, I stepped on first and felt the social obligation to press the number for our floor. Without thinking twice, I did what I normally do when out in public: I used my elbow to touch the button for our hotel floor. And that’s when it happened: my friend chuckled to himself loud enough for me to actually hear it. When I turned back to see what he was laughing at, he quit chuckling almost immediately. It dawned on me after some reflection that he was actually laughing at me (not with me) for using my elbow to touch the elevator button.

In sharing this story, I want to calm all the germophobes reading this. I step up to the line of germophobia, but take one step back. We need to balance our understanding of the microscopic world because it is an essential part of and critically affects our everyday life. A recent study compared skin germs between humans and apes to better understand just how microbes affect our everyday life and personal hygiene in a genuine (though misguided) effort to further prove common ancestry. But before we can understand how the microbiome is part of God’s original creation and better appreciate His marvelous design (yes, even in our armpits!), we must first define some important terms.

Microbes are the earliest forms of life on earth.1 Biology is difficult enough, but microbiology presents a whole new challenge because it deals with organisms that you can’t even see with the naked eye. To clarify, think of microbiology as biology under a microscope. For us microbiologists, the living world we see without using a microscope is relatively boring compared to the unseen living world at the microscopic level (cf. Colossians 1:16). Bacteria are just one type of organism among many at the microscopic level.2 While diversity of life at the microscopic level is not only bacterial, most scientists generally refer to microbes as bacteria. The importance of referring to microbes with only bacteria in mind is important when describing the microbiome.

The word microbiome comes from the root word microbe. Anytime the letters -ome are added to the end of a word, the meaning of the word changes to mean “all of the” word appearing before it. So the microbiome includes all of the microbes for a given location. While sequencing the human genome was significant, sequencing of the human microbiome could be just as important, since the human body houses 10 bacteria cells for every single human cell. The microbiome is usually measured based on DNA sequencing of the 16S ribosomal subunit to generate what’s called a molecular signature.3 The molecular signature acts like a fingerprint to reveal the bacterial identity. 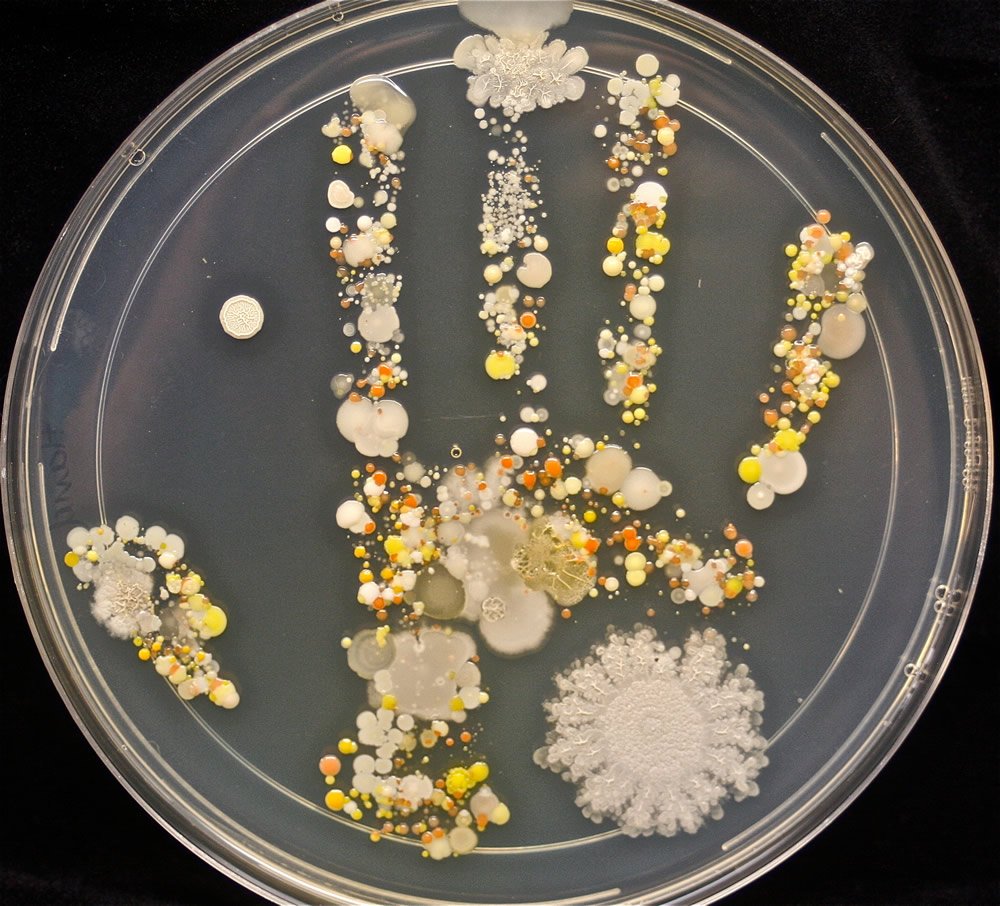 This image shows common environmental bacteria that are all good for a healthy immune system. It's okay to get dirty, but washing hands after using the bathroom and before eating are good hygiene practices and can prevent disease. Image courtesy of Tasha Sturm, Cabrilo College, via ASM Microbeworld.

Microbiome scientists are interested in questions such as “What bacterial species are present? And in what abundance?” Scientists think of microbiomes like a chef might think of food when planning to cater for a party. Chefs need to know both how many guests there are in addition to what type of food they like. At the microbial level, microbiome scientists measure the human microbiome by considering who is there and how many. The current scientific model of the microbiome follows the Baas-Becking hypothesis that “everything is everywhere, but the environment selects.” Therefore, scientists expect a certain degree of microbiome similarity between similar locations. But the contrast is also true: if two environments are different, then the microbiomes will be different. So how is our microbiome designed?

Most people are horrified when they learn just how many bacteria live on and in us.4 Oftentimes, people react by actively disinfecting all of their personal things. Many are acutely aware of the bad germs surrounding them when they are sick. If we feel ill, we seek antibiotics. Ironically, we’re also supposed to eat lots of yogurt and take probiotics (good germs) on a regular basis—all in the name of health. We misunderstand health and sickness because we want to have our bacteria and kill them too. If we don’t understand the origin and purpose of bacteria, then we are downplaying God’s design and affecting our overall health. Is there a balance? 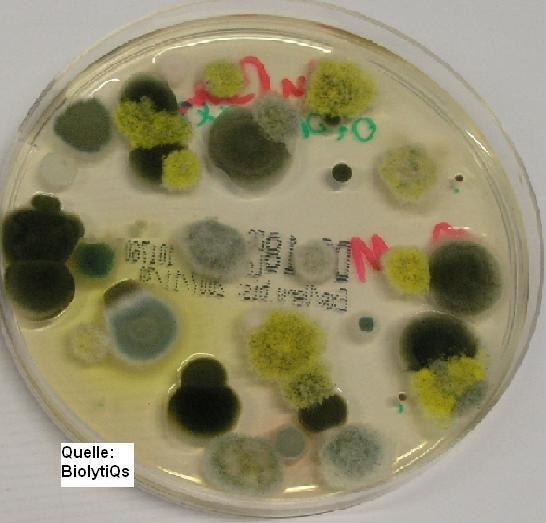 Mold growing in a petri dish. Image by Fumigatus, via Wikimedia Commons.

From the oceans to the soil to the human body, our planet could not exist without microbes. In Scripture, we learn that God first creates something and then He fills it (based on Genesis 1:2). Everything God made was mature, which means microbes were created in association with all of creation to benefit the earth. Dr. Joe Francis does an excellent job explaining the ubiquity and design of microbes with his concept of the biomatrix. The original “very good” creation must have included microbes because they are essential to life. So God created man with bacteria both inside and outside. We find myriad examples of beneficial bacteria in our intestine, and a growing body of evidence suggests that the bacteria on our skin also benefit and protect us.

Bacteria Are the Only Culture Some People Have

In any biology textbook, you can find a chapter explaining how animals regulate their body temperature. When any creature’s temperature is outside acceptable limits, there are mechanisms to bring the temperature within normal limits. Our sweat glands lower our temperature through evaporative cooling, but some creatures lower their temperatures using a different mechanism. For instance, man’s best friend (the dog) does not have sweat glands to mediate evaporative cooling. Instead, when overheated, dogs pant heavily to cool themselves. Among the many things that evolutionists try to use as a similarity between humans and apes, they highlight the fact that we both have hair and sweat glands. But what they don’t tell you is how gloriously different our Creator God made us.

The distribution, function and secretion of the different types of human skin glands (sebaceous, apocrine and eccrine) are briefly described. . . . Eccrine glands are the best developed and most abundant glands in humans and are widely distributed over the general body surface. By contrast, in most mammalian groups (including prosimians, monkeys and apes, with the exception of great apes) eccrine glands are limited to the friction surfaces of the hands, feet and tail. Apocrine glands, which play an important role in chemical communication, have a restricted distribution in most mammals including humans. . . . All prosimians, monkeys, and apes have thermal apocrine glands associated with hair follicles. The chimpanzee and the gorilla exhibit a distribution ratio . . . [only slightly different from] . . . monkeys, the gibbon, and orangutan. . . . By contrast, humans mainly possess eccrine and relatively few apocrine glands.9 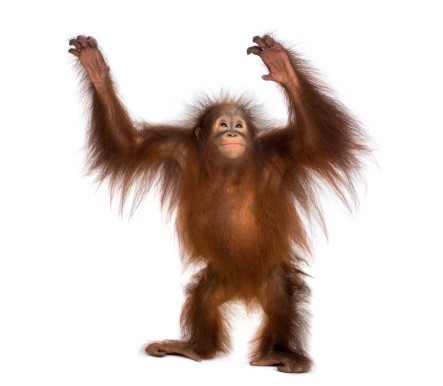 You should cry “foul” when anyone tries to compare human skin to any monkey or ape skin because the similarities are just too few. Regardless of these major differences, scientists recently decided to analyze the armpit microbiomes from humans, chimpanzees, gorillas, baboons, and rhesus macaques.10 In the article, the authors even admit that “the composition of microbes on human skin might be expected to differ significantly from that of our closest relatives, the non-human primates, for at least three reasons.”11 As creationists (and scientists), we expect to find differences based on empirical science. The Baas-Becking hypothesis previously mentioned says similar microbes are found in environments that are similar. Since the environments in armpits of humans and apes have (1) completely different glands, (2) different chemicals secreted, and (3) different concentrations, then the logical expectation based on empirical science is to find significant differences between the skin microbiome of humans and primates (as well as differences in the armpit microbiomes on other animals, because humans were created uniquely from the rest of creation). The only people committed to expecting strong similarities are Darwinists because (and only because) they are committed to a worldview despite empirical evidence to the contrary. Not too surprisingly, the Darwinists were surprised. What did they find? The armpits between humans and apes have few similarities and carry different bacteria. The assortment and diversity of bacteria found in different microenvironments are not surprising between humans and apes when you acknowledge the unique design of each creature and approach science without the wrong presuppositions. The differences between human microbiomes and ape microbiomes are so unique that mosquitoes detect these differences and prefer feeding from certain creatures (i.e., humans) over others (i.e., everything else).12

Want to tell the difference between human and monkey sweat? So easy, even a mosquito can do it!

If even mosquitoes can tell the difference between the human and ape microbiomes, then how do evolutionists interpret the empirical evidence to fit their worldview? The authors of this microbiome study (along with other evolutionists) claim that the evolution of personal hygiene is the culprit. A recent article proposes that we should only shower once a week because we’re “harming” the environment due to personal hygiene products.13 Furthermore, we are often told that the reason humans groom each other is because of our evolutionary history of apes grooming one another. But when you scientifically examine ape-grooming behavior, the irony is that they actually groom out of fear; it is a dominance behavior.14 And when you scientifically examine any other evolutionary claim, you find yourself trying to work out of an armpit existence. Evolution is foul smelling, dark, and damp because it is logically incoherent. Creationists are not surprised to find differences between human and ape skin microbiomes because we are not committed to a worldview claiming humans and apes share common ancestry. As a result, creation scientists are open-minded to existing differences and can ask more sophisticated questions aimed at understanding the skin microbiome and improving health.

The next time you work out, engage in physical activity, or otherwise find yourself sweating, wipe your brow in praise to our Creator who gave us everything we need in our existence. Don’t sweat the small things in life. Keep a cool head. Even as seemingly gross as the microbiome is in this fallen world, there is no doubt that our loving Creator fashioned it to help us when things get tough.