All Research Is Creation Research

What active research are you doing related to creation? 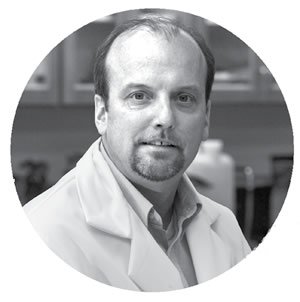 My philosophy is any research we do is creation research because it all involves God’s creation. For instance, viruses and bacteria cause a lot of problems, and they look designed. How do we explain what appears to be this evil creation?

Well, maybe those designs were originally used for good, but there was a big change. The principle of the literal Fall guides all of my research. I have a basis for looking for the good function of what appears to be designed evil in nature. And we’re finding things we thought were toxic have good functions. Creationists can look at things in a more holistic way and contribute to an area of science that others are not thinking about.

What are some research projects you’ve gotten students involved in?

A few years ago we were working with bacteria that only grows on salt, and we found an antibiotic that no one had discovered!

This bacteria contaminates manufacturing processes that use high salt, like making leather. So we were able to write a patent about how the antibiotic we discovered might be used to help the leather industry.

But the most important thing was the excitement of the discovery and having students involved in it. A lot of fun discoveries come from simple observations. How important is a belief in biblical creation to the study of biology? We need to show creation ideas are more powerful than evolution, and that the same data evolutionists use can be reinterpreted in a creation framework. I think that’s very powerful.

Can you ever dialog with evolutionists?

A few years ago, we developed a dialog with some atheists that led to a debate we held at the college. But we spent a year actually working on relationships, and even developing friendships. For the most part, they were just curious how someone could believe the Bible and do science.

What prospects do you see for changes in evolutionary thinking?

During our debate a student asked a panelist, “Where does morality come from?” A year later, that panelist told me he has not stopped thinking about that. Even though evolution is a powerful force in public education, the people who hold to it are still people.

I think change will come one heart at a time. I don’t know what will happen in the future, but I know my neighbor sees God in nature, according to Romans 1. How can I now help them to see Christ, the Creator?

Previous Article Creation in Italy Next Article Designed for Purity