Tiny Mercury has much to say about the origins of our solar system.

Mercury is a planet of extremes. The side of the planet that faces the sun reaches a temperature of about 430°C (more than enough to melt lead), while the dark side is a frigid –170°. Mercury revolves around the sun every 88 days, and has the unusual characteristic of rotating on its axis exactly three times for every two complete orbits.

Much of our information about Mercury comes from the Mariner 10 fly-by of 1974–75. Lacking the variety and colour of some other planets, Mercury’s rocky, cratered surface resembles the moon’s [see picture below]. But what is really interesting about Mercury are the things that can’t be seen.

Scientists have discovered that Mercury has the highest density of all the known planets (other than Earth). Mercury is so dense that it’s thought to have an iron core occupying some 75% of its diameter.1 This extraordinary density has generated much turmoil and confusion in evolutionary astronomy. Evolutionists mostly agree on models of planetary formation … but their models say Mercury can’t be anywhere near as dense as it actually is.

After decades of struggle, most astrophysicists today have given up and admitted that Mercury’s high density cannot be accommodated within slow-and-gradual-development models.

Instead, the preferred explanation now is that billions of years ago, a large object crashed into Mercury, stripping away its lesser-density material, and leaving behind the high-density planet seen today.2

Mariner 10 was the last of its series of spacecraft and the first mission to use the gravitational pull of one planet (Venus) to reach another (Mercury). The craft was launched in 1973 and reached Mercury on 29 March 1974. During the following year it returned 10,000 images of the planet and had mapped 57% of the surface when its power became exhausted. It is now in orbit around the sun.

Consider the implications of this. Evolutionists have admitted that the planet that we see today cannot be explained by gradual evolutionary processes! This is a stunning admission. Instead, they propose a long-ago catastrophic collision. What is the evidence for this collision? Only that Mercury would otherwise disprove evolution!

Over and over again in astronomy, cosmic collisions are invoked as a sort of magic wand to rescue evolutionary theories from the facts. The planet Uranus is tilted over, but evolution says it can’t be—therefore, long ago something hit it and knocked it over. Venus’s rotation contradicts evolutionary predictions—therefore, long ago something hit it and spun it round the opposite way.

Mars’ atmosphere is too thin for evolutionist tastes—therefore, it used to be thicker, but long ago something hit Mars and stripped most of it away. Mercury is too dense for evolution—therefore, long ago something hit it and conveniently removed the lighter parts. Evolutionists wave their collision-wand at will, and yet mock as “unscientific” the Christian belief in a one-off catastrophic global Flood, despite the abundant physical and historical evidence for it.

Mercury’s challenges to naturalism are not limited to its density. Evolutionists received another rude jolt when Mercury’s magnetic field was discovered. To understand why this poses a problem, we must discuss evolutionary ideas of planetary magnetism.

Most solar system planets have significant magnetic fields. Where do these fields come from? Evolutionists (and long-age creationists) hold to a “dynamo” theory, which requires those planets with magnetic fields to also have molten metal cores.

Through a complicated series of events, fluid motions inside the core can supposedly generate a magnetic field. Evolutionists believe this idea because it is the only mechanism they have been able to propose by which planets supposedly billions of years old could still have magnetic fields—all of the other mechanisms would require that the planets be very young.

Back to Mercury. To be billions of years old and still have a magnetic field, there must be fluid motions within a planet’s core. Therefore, the core itself must be molten. But as one evolutionist says, “Mercury is so small that the general opinion is that the planet [i.e. its core] should have frozen solid aeons ago”.5 Therefore, the core cannot be molten, and so evolutionary theories would have to conclude that Mercury cannot have a magnetic field. But it does!

Some evolutionists speculate that perhaps Mercury’s core isn’t iron (which would have “frozen solid eons ago”), but iron sulfide instead (which wouldn’t necessarily have solidified over these supposed eons). But in solving the problem for Mercury, a much bigger problem is created.

A fundamental principle of the solar nebula theory (used to explain how our solar system formed) is that there cannot be any volatile elements such as sulfur this close to the sun, and so there shouldn’t be any iron sulfide in Mercury. Thus, in trying to rescue a billions-of-years age for Mercury, evolutionists are undermining the very foundations of their ideas about the formation of the entire solar system.6

Creationists have no problem explaining the magnetic field of Mercury, nor that of any other planet. There are several ways in which a young (6,000-year-old) planet could still have a magnetic field.7 But since evolutionists reject a young creation, they cannot explain planetary magnetism. As one evolutionist says, “Magnetism is almost as much of a puzzle now as it was when William Gilbert (1544–1603) wrote his classic text Concerning Magnetism, Magnetic Bodies, and the Great Magnet, Earth in 1600”!8

When a Christian examines the solar system, it is easy to wonder if the Creator designed the planets specifically to confound non-creationary explanations of them. Repeatedly, new discoveries contradict naturalistic ideas. Ironically enough, in the case of Mercury, even evolutionists admit to this, after a fashion. They admit that any attempt to include Mercury in their evolutionary models will doom the models to failure—they say that Mercury is a “trap”9 that has “seduced”10 evolutionists, and has had a “fatal attraction for solar system modellers.”11 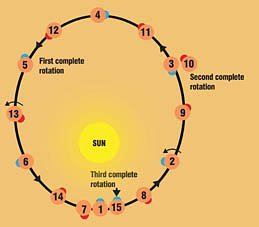 If you were standing on Mercury, you would see the sun rise, then immediately set again before rising again and travelling westwards. Similarly, at sunset, it rises again briefly, before setting once more. This is due to the way Mercury’s rotation combines with its very elliptical (egg-shaped) orbit.