In 2014 and 2015, a series of lunar and solar eclipses around the times of Passover and Sukkot are regarded by some as a fulfillment of prophecy regarding the Second Coming of Jesus Christ.

Mark Biltz is the founder of El Shaddai Ministries, a Hebrew roots resource and teaching ministry located near Tacoma, Washington. Recently Biltz has attracted attention in presentations and YouTube videos about end-time prophecy and the Lord’s return. He discusses the significance of four total lunar eclipses that will fall on the dates of Passover and Sukkot in 2014 and 2015. The Crucifixion of Jesus was at the time of Passover, and Biltz believes that the Second Coming of Christ must happen at Sukkot, so he argues that this relatively unusual event of four lunar eclipses on these four dates has great significance. He also mentions two solar eclipses in 2015 having prophetic implications. Because total lunar eclipses often appear red, people sometimes call a totally eclipsed moon a “blood moon.” Therefore, Biltz suggests that these eclipses are a fulfillment of the prophecy in Joel 2:31 of the sun being darkened and the moon turning to blood and suggests that they may presage the Lord’s return. Others, such as John Hagee, have begun speaking about this as well. Let us examine some of these claims.

However, a wide range of color and brightness can be found in lunar eclipses. This is based on atmospheric conditions at the time including dust and humidity levels. While the color of some total lunar eclipses could be compared to blood, others are more orange, similar to a pumpkin. Still other eclipses look yellow, and some are very dark—virtually black. One of the most unusual total lunar eclipses was the very long one on July 6, 1982. Half of the earth’s umbra was as dark as coal, but the other half was rather bright and had a peach-like color. No one alive could remember such an unusual-looking lunar eclipse, nor were there any similar reports of past eclipses. In short, most lunar eclipses don’t appear blood-like, so it is a bit presumptuous to assume that any particular future eclipse—or, in this case, four eclipses—must of necessity be “blood moons.”

How unusual are total lunar eclipses?

But what about the coincidence of the four eclipses of 2014–2015 with Passover and Sukkot? 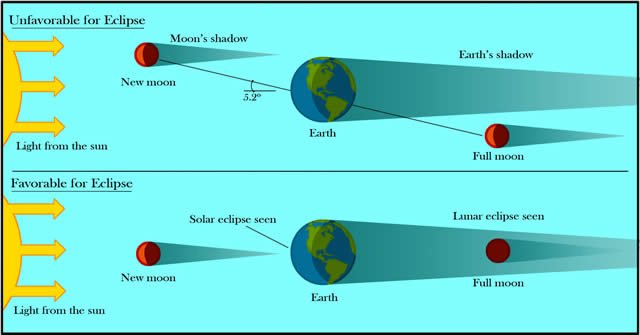 There are two times per year when the nodes are roughly aligned with a full moon. These eclipse seasons are little more than a month long, and they are separated by a little less than six months. The moon’s orbit precesses in an 18.6-year period, so the eclipse seasons shift about 20 days earlier each year. The result is that the possibility of lunar eclipses happening around the times of Passover and Sukkot (which are six months apart) repeats roughly half of this 18.6-year period. For instance, in 1995–1996, there were four lunar eclipses (not all were total)—two that fell on Passover and the other two within a day of Sukkot.1 I set up a telescope for public viewing during the total lunar eclipse in September 1996 and mentioned to the people who showed up Joel’s prophecy and the timing of the eclipse with Sukkot.

But isn’t it unusual to have a lunar eclipse on the same day as Passover or Sukkot?

No, it’s really not that unusual. Remember, a lunar eclipse happens only at full moon. We don’t follow a strictly lunar calendar today, but most ancient people, including the Hebrews, did. Their months began with the first appearance of the crescent of the new moon, which is a day or so after our modern definition of a new moon (when the moon and sun are in longitudinal conjunction). Reckoning from this point, fourteen days later, or the fifteenth of the month, always coincides with full moon.2

The civil year began near the autumnal equinox on the first day of the first month, and Jews today still celebrate Rosh Hashanah (New Year) then. However, at Sinai God established that the ceremonial year would begin in the spring, six months earlier. The festivals that the Hebrews were to observe on this ceremonial calendar are recorded in Leviticus 23. Passover is the fifteenth day of the first month and Sukkot begins on the fifteenth day of the seventh month, six months after Passover. Thus, Passover and Sukkot are always at full moon and always six months apart.

The coincidence of these festivals with lunar eclipses is not as rare as Biltz implies.

There are roughly 29.5 days in a lunar month and thus 354 days in 12 lunar months. This contrasts with about 365 days in a solar year, so some adjustments must be made to keep solar and lunar calendars synchronized. The easiest adjustments are to alternate between 29 and 30 days per month and to add an additional, intercalary month about every three years. Eventually the Hebrews adopted the Metonic cycle, a method of adding intercalary months appropriately in a 19-year cycle, but it is doubtful that they adopted this immediately.3 The first of each month initially may have been observationally determined, but eventually, as today, a formula determined when the first of each month occurred, and that algorithm nearly always matches what one would normally observe as the beginning of the month.

Illustrating the Recent Coincidences of Lunar Eclipses with Passover and Sukkot 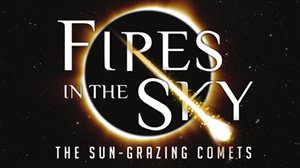 We are excited to announce a new program in our Stargazers Planetarium at the Creation Museum. Fires in the Sky: The Sun Grazing Comets comes just a few months before the sun grazing Comet ISON makes it’s pass around the sun later this year.

There are at least five reasons why these eclipses don’t exactly match the dates of the holidays. First, the algorithm for determining the beginning of the Hebrew months results in the first of each month falling one or two days after astronomical new moon. This difference of a day or two causes the fifteenth day of each month to vary by a day or so from astronomical full moon, which is when a lunar eclipse must occur. Second, the moon doesn’t move in its orbit at a uniform rate, so the time between new and full phases varies slightly. Third, the date of each eclipse is listed for the Universal Time (UT, which for our purposes can be treated as the same as Greenwich Mean Time [GMT]) of mid-eclipse. This means that many of the eclipses span two days in UT.

Fourth, since lunar eclipses are seen at night and we change our calendar day at midnight, lunar eclipses must span two days as reckoned locally anyway. Fifth, there is a little ambiguity as to the date of Passover and Sukkot. In our modern convention we begin our days at midnight, but in Hebrew reckoning the day begins at sunset. On most calendars the dates of Passover and Sukkot are listed as the conventional date on which the sunset would commence the respective observances. For instance, in 2013 we said the Passover began on the evening of March 25, but in Israel it began on March 26, for there it already was March 26 at sunset. The dates in Table I were listed according to the modern convention, not the dates in the Hebrew reckoning.

With these caveats, we can say that all 39 of these lunar eclipses coincided with Passover or Sukkot. This is about one-sixth (39/230) of the twentieth-century lunar eclipses, which is what we would expect because Passover and Sukkot happen in two of the 12 months. The relatively high frequency is a result of definition of the fifteenth day of the month on a lunar calendar. Therefore, again, the coincidence of lunar eclipses with these two observances is more common than Biltz realizes.

From what vantage point must one view these eclipses?

There also is a question of from what portion of the earth one ought to view these eclipses for them to constitute a sign. One might think that Jerusalem would be a key site, but the first three total lunar eclipses in 2014–2015 won’t be visible from there, and only the beginning of the final eclipse will be. One must ask whether a sign that few people notice is much of a sign.

What about the two solar eclipses in 2015?

Biltz claims that the two solar eclipses in 2015 may be a fulfillment of the prophecy of the darkening of the sun. In one of the videos Biltz states that the first eclipse (March 20, 2015) is on the first day of the ceremonial year, attaching great significance to this fact. While this is technically incorrect since the eclipse is on the last day of the previous month and year, this discrepancy can be explained similarly as discussed above for lunar eclipses.

Who will witness the two solar eclipses in 2015?

The first eclipse (March 20, 2015) is total. Having personally experienced one total solar eclipse, I can testify that a total solar eclipse is stunning and awe-inspiring. Therefore a total solar eclipse could be interpreted as a great sign to those who witness it. But how many people will witness this particular eclipse? The eclipse path is in the North Atlantic and Arctic Oceans. The only landfalls that the eclipse path will make are the Faroe Islands and Svalbard. The population of the former is 50,000 and the latter less than 3,000. The eclipse is of short duration, and the weather can be overcast much of the time at that latitude. There is a good chance that few people, if any, will actually see this eclipse.

The second solar eclipse (September 13, 2015) is partial and falls on Rosh Hashanah. Though many people have experienced a partial solar eclipse, most of them had no idea that anything was going on. This is because unless a partial eclipse is very close to being total, the sun is not appreciably dimmed. Not actually witnessing these events but instead just knowing that somewhere some sort of solar eclipses are happening seems to fall far short of being specific and spectacular signs of end times.

Mark Biltz has an engaging style, and judging by the response of those in attendance in the videos, he makes a very persuasive case for his audiences. However, most of those in attendance probably know little, if anything, about the circumstances and appearance of lunar and solar eclipses, so they are easily impressed. Biltz makes two key observations. First, he notes the coincidence of these eclipses with major Jewish festivals. Second, he points out that these four eclipses are in a row (a tetrad). Admittedly, bringing together such factors is rare, though not unique, but there is no suggestion that these eclipses will be otherwise exceptional. The biblical passages that refer to the dimming of the sun (Matthew 24:29; Joel 2:31) and the moon turning to blood (Joel 2:31) speak in very apocalyptic terms, emphasizing frightening things that men experience. The timing of the eclipses that Biltz draws attention to, while interesting, falls far short of the sort of signs that will cause the heavens to shake (Matthew 24:29).