The Search for a Cursed Cosmos

Finding evidence of the Curse outside our planet is not as easy as you might think.

As an astronomer, I am sometimes asked what effects the Curse had upon the cosmos beyond earth. How did Adam’s fall into sin affect stars, galaxies, and planets, for example? This question seemed straightforward, but as I looked closer, I found that it was more complicated than it first appeared.

When Adam rebelled against God by eating the forbidden fruit, God placed a curse on the world. No longer was the cosmos the perfect creation that God Himself had declared “very good” (Genesis 1:31).

The world had changed. But in what ways? Can the effects of Adam’s sin be observed, for example, in a telescope? Did the laws of nature change when God cursed the earth? What can we discover from the Scriptures?

Known Effects of the Fall

Let’s begin by discussing what the Bible clearly states about the Curse.1 The Curse meant that humans and animals would now suffer pain, disease, and eventually death.2 Work would be difficult and sometimes painful as thorns and thistles now compete for the ground. Clearly, the earth, the plants, and all living creatures were changed as a result of the Curse.

But what about the universe beyond earth? Scripture is clear that all creation was touched by the Curse and now suffers a “bondage of corruption” (Romans 8:20–22). But what does this mean in particular? 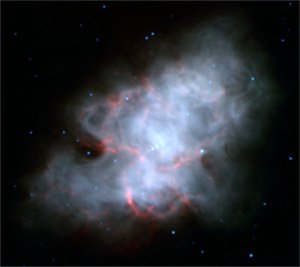 This is the remnant of a supernova, a star that has exploded in the Crab Nebula. Are these exploding stars a result of the Curse? NASA/JPL-Caltech/R. Gehrz (University of Minnesota)

Let’s consider craters and supernovae first. It would be hard to establish from the Scriptures alone that they are results of the Curse. The Bible does not mention these things by name, and so one could only make an indirect argument that such signs of catastrophe do not comport with a world that is “very good.”

But any such argument would be subjective; it would be based on an arbitrary personal assessment of what is to be considered “good” or “bad” rather than what the Bible objectively teaches. Indeed, anyone who has seen a supernova or the craters on the moon through a telescope is awestruck by their astonishing beauty.

The Bible does indicate that certain things are clearly bad: things that affect humans and animals in a negative way (sickness and death, for example), either directly or indirectly. So sickness and death must be a result of the Curse. Recall that Jesus healed the sick and raised the dead. God cares about the animals, too (Luke 12:6; Proverbs 12:10; Exodus 20:10; Deuteronomy 25:4), so they would not have suffered or died in God’s original very good world.

So what about craters and supernovae? Are such things really “bad”? Craters on other worlds and distant supernovae do not have any substantial negative impact on human beings, and so it would be hard to argue that they must be a result of the Curse, though of course they could be. Could a perfect universe have craters and exploding stars? Potentially, yes.

Yet the specific ways in which the Curse touched the lifeless celestial realm will always retain an element of mystery.

The Law of Decay

Some people have also argued that the second law of thermodynamics began at the Curse. In its original form, this law deals with the transfer of thermal energy (heat). According to the second law of thermodynamics, energy will tend to move from hotter objects to cooler objects. This is a type of “decay,” and the reverse never happens spontaneously. For example, if we put an ice cube in a cup of hot coffee, the thermal energy will always go from the hotter liquid to the much colder ice cube. This will heat the ice cube, causing it to melt, eventually resulting in lukewarm coffee.

As another example, solar energy travels from the sun to the earth because the sun is much hotter than the earth. Notice that according to Genesis 1:14–18, the sun (the “greater light”) was designed to give light upon the earth at its creation. Since this happens as a result of the second law, it is clear biblically that the second law of thermodynamics was in operation during the Creation Week. It operated before the Curse, and thus, is not a result of the Curse.

The decay of energy is not a bad thing. Rather, it is an important aspect of creation and a requirement for life.

The Decay of the Cosmos

Although the second law is not intrinsically bad, one difficulty remains. As a result of the second law of thermodynamics, the universe is “running down” as its usable energy decays to a useless form. Consequently, the universe cannot last forever. It must eventually run down completely (Psalm 102:25–26).

Surely the original universe would not have been this way; after all, Adam and Eve potentially could have lived forever had they not sinned. How do we reconcile this with the necessity of the second law?

A Hint from the Exodus

Rather than the second law of thermodynamics beginning at the Fall, it seems more likely that its restorative counterpart ceased at the Fall.

The exodus of the Israelites may provide a partial answer. When the Israelites wandered in the wilderness, God provided for them in a very special way. Not only did God supply food (Exodus 16:35), but He also preserved their clothing and prevented their feet from swelling (Deuteronomy 29:5; Nehemiah 9:21). Since clothing normally wears out with time, it would seem that God was acting in a restoring capacity so that there was no net decay of the material.

It could be that God acted in a similar way with the entire universe before the Fall of man. Although the decay of energy is necessary for life, it could be that God constantly provided a restorative process, whereby the decaying energy was eventually recycled back into a usable form.3

So, although the second law was in full effect, another compensating restorative process may have prevented any net decay of the universe. This would allow the universe and life on earth to exist forever, while heat and energy would still behave as they do today (for the most part).

So, rather than the second law of thermodynamics beginning at the Fall, it seems more likely that its restorative counterpart ceased at the Fall.4 God no longer sustains the universe in an eternal, regenerating way.

This is only one possible explanation, of course. The human mind is not the limit of possibility; God is. So we trust that God is capable of creating and sustaining a perfect world by His wisdom. We can rest in God’s promise that He will restore paradise (Acts 3:21) and that He will perfectly sustain the new heavens and new earth forever (Revelation 21–22).