It is important that the Christian be ready always to give an answer to anyone who asks a reason for the hope within him (1 Peter 3:15). The Christian faith is all-encompassing, touching every aspect of human experience, including morality, history, and even astronomy. This issue of Answers magazine attempts to answer many of the most-asked questions about astronomy. Although we can’t deal with them all in detail, here we give concise answers to some common questions.

What about Stellar Evolution?

Secular astronomers believe that a star gradually changes over millions or billions of years as it eventually runs out of fuel. Giant and supergiant stars are said to be in the last stages of the stellar evolution cycle. The final step, depending on the mass of the star, is to collapse and become a white dwarf, or to explode in a supernova.

A Christian should be skeptical of any claim involving millions or billions of years. Obviously, no mere human has observed the complete life cycle of a star. On the other hand, some creation models allow things to age millions of years in space while only thousands of years of time actually pass on earth. So we can’t summarily dismiss all claims of stellar “evolution.”

Some stars do change with time. For example, we have seen stars explode. Others pulsate. History records that some stars have changed brightness drastically. The question becomes, how much of stellar evolution theory is correct? Do stars really become supernovae because they have run out of fuel, or is there a different explanation? Do giant and supergiant stars really represent stars that are near the end of their life, or are they simply a different variety of star? Given the number of difficulties with various scenarios of secular stellar evolution, it may be that a new and totally different model of stellar aging, from a young-universe perspective, is needed. Stellar aging is an active area of creation research.

Is There Water on Other Planets? 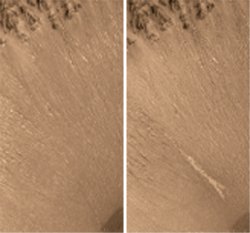 NASA images (August 1999 photo on left, Sept. 2005 photo on right) may suggest evidence for flowing water on Mars; however, liquid water has not been clearly identified to date. Photos courtesy of NASA.

Since hydrogen (H) is the most common element in the universe, and since oxygen (O) is the third most abundant, it isn’t surprising that the water molecule (H2O) is actually one of the most common molecules. H2O is often found as vapor or ice. Water vapor exists as a trace compound in the largely empty regions between the stars (the interstellar medium) and is found in the atmospheres of planets and cool stars. Water-ice (ice form of water) is found on the surface of some planets and on a number of moons. Comets are made largely of water-ice.

Water is not commonly found in its liquid state, however. This is because liquid water can exist only within a relatively narrow window of temperatures and pressures. Earth appears to be unique in having a surface that is covered over 70% by liquid water. As of the writing of this article, liquid water has not been clearly identified elsewhere in the universe. Given the abundance of the water molecule, however, it seems likely that liquid water may exist somewhere else in the universe.

An object whose light has been stretched since it was emitted is said to be “redshifted.” Conversely, if the wavelength of the light is reduced, the object is said to be “blueshifted.” A redshift does not mean that the object will necessarily appear red. It simply means the light wavelengths are longer (and thus appear “redder”) than they would otherwise be.

So you can’t tell just by looking at a star whether it is redshifted or blueshifted. In fact, the overall color of a star indicates its temperature—it has virtually nothing to do with redshifts. To calculate redshift, astronomers break the light into a rainbow (a spectrum) and measure how certain spectral features have moved toward the red end of the spectrum.

Several things can cause a redshift. One is velocity. If a star is moving away from us, its light beams become stretched due to the Doppler Effect. Stars within our own galaxy are redshifted or blueshifted due to their velocity relative to us. A second cause of redshift is gravity. Light leaving a source with strong gravitational pull loses energy, causing it to become redshifted. The surface of Sirius B (a white dwarf with a very strong gravitational field) is slightly redshifted for this reason.

A third way to cause a redshift of light is expansion of the universe. The universe seems to be expanding, as is suggested in passages like Isaiah 40:22. Light traveling within the universe becomes stretched as the universe is stretched. So light that has been traveling the longest (and therefore, from the most distant objects) is more redshifted than light from nearby sources. This effect explains the “Hubble Law”: the observation that distant galaxies are much more redshifted than nearby galaxies.

Is There an Oort Cloud? 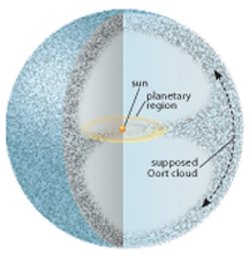 Diagram of the supposed Oort cloud

Since comets, even according to secular cosmic standards, are rapidly destroyed by solar radiation, they can’t last billions of years. Yet we still see comets. This suggests that the solar system is much younger than the secular model requires. To overcome this difficulty, secular astronomers have postulated the existence of an Oort cloud, named after Jan Oort, who first proposed the concept in 1950.

The Oort cloud is a hypothetical vast reservoir of icy objects orbiting at extreme distances from the sun, far beyond the orbit of Neptune and (conveniently) beyond the range of our most powerful telescopes. The scenario is that, occasionally, one of these objects is dislodged from its distant orbit and thrown into the inner solar system to become a new comet.

There is currently no evidence for an Oort cloud, however. As far as we know, it remains a mere speculation designed to rescue the notion of billions of years from a solar system that doesn’t support it. We would not be surprised if eventually some massive objects were discovered at such a distance. The notion of billions of icy comets at that distance, however, is nothing more than an unsubstantiated conjecture.

What about Distant Starlight? 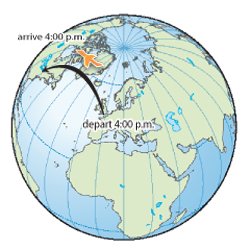 Briefly stated, some galaxies are so far away that it is thought to take billions of years for their light to get to earth. Yet the Bible indicates that the entire universe is only thousands of years old. So how are we able to see these galaxies?

We suggest that the light was not created “already on its way,” as was once widely believed early in the modern creation movement, because this would mean we see things happen in space (e.g., stars exploding) that never happened.

However, there are several possible solutions to distant starlight. Although a complete discussion of these is beyond the scope of this short article, let’s briefly hit a few of the top contenders. 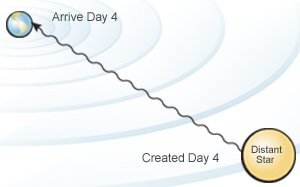 Light can leave a star on Day 4 of Creation and arrive on earth on the same day as long as the light is traveling toward the earth.

Some creationists believe that gravitational time dilation has caused the universe to experience millions of years’ worth of processes, while only a few thousand years have elapsed on earth. This effect, made popular by Dr. Russ Humphreys’s book and DVD Starlight and Time, comes out of Einstein’s physics and has been confirmed on earth, though on a much smaller scale.

Another model, which I am currently working on, uses alternate synchrony conventions, much the way time zones work on earth. So some scientists think that light can leave a star on Day 4 of Creation and arrive on earth the same day, just as a plane can leave London at 4:00 p.m. and arrive in Toronto at 4:00 p.m.

Also, since stars were created during the Creation Week (when God was working “outside” of today’s “natural laws”), we must leave open the possibility that God got the starlight here using means that are not accessible today.

It is important for the Christian to study and be ready to give an answer when asked these kinds of questions. When we properly understand the evidence, we see that astronomy confirms the Bible, just as all science does.

Previous Article The Gospel Message—Written in the Stars? Next Article Far Out Claims About Astronomy