What Went Wrong at NASA?

Some attribute the decline of NASA to the change in leadership in the early 1970s when NASA began to pursue evolutionary ideas.

The space age began with a bang on October 4, 1957, when the Soviet Union launched the first satellite, Sputnik. The 98-minute orbit fulfilled the dreams of a long line of visionaries, from those who wrote the Greek myth of Icarus to modern science fiction writers like H. G. Wells, Jules Verne, and Edgar Rice Burroughs.

The motives for entering space have varied—the sheer love of discovery, testing human limits, extending human dominion, gaining military advantage. The American Robert H. Goddard, who was consumed with the ultimate goal of human space travel, pioneered rocket science between 1914 and 1937. Wernher von Braun and his German crew, building on Goddard’s work, designed the V-2 rocket of World War II. As the war ended, von Braun and most of his colleagues made their way to the American lines to surrender, after which they helped found the U.S. space program.

The Race to the Moon

The main drive behind early space flight was military superiority. With the help of expertise from the conquered Germans, the Soviets started the rocket race far ahead of the United States. They launched Sputnik II before the United States could respond with its first satellite early in 1958. The first years saw many other firsts by the Soviet Union, including the first animal in orbit (a dog) and the first human to orbit the earth, Yuri Gagarin in 1961. 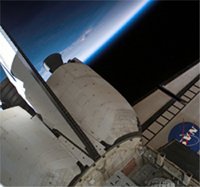 But Sputnik had galvanized the sleeping United States. Following upon work initiated during the administration of President Dwight Eisenhower, after entering office in 1961, President John Kennedy rallied the nation to land American astronauts on the moon before the end of the decade.

By 1967 the Apollo program was ready to carry three astronauts to the moon. Tragically, the first mission of the program, Apollo 1, ended with a disastrous fire during ground testing early that year. All three astronauts died.

After an extensive redesign of the spacecraft, the first manned mission (Apollo 7) orbited the earth in 1968 to test the rocket and vehicle. On live television, as the world watched in awe, the Apollo 8 astronauts read from the first chapter of Genesis while the television networks showed photos taken while orbiting the moon. Finally, on July 20, 1969, Neil Armstrong, the commander of the Apollo 11 mission, stepped onto the lunar surface.

A Crisis of Purpose

Interest in the space program quickly waned after Apollo 11. The last two flights of the Apollo program (18 and 19) were canceled to save money. Funding for the short-lived space station Skylab was curtailed, and there were only three missions to that orbiting laboratory. At the height of détente in 1975, the United States and the Soviet Union linked an unused Apollo craft with a Soyuz spacecraft. But this was the last manned flight for the United States for several years. 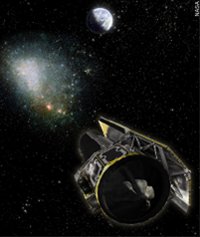 NASA planners proposed a more efficient way to explore space by designing a reusable craft. The first shuttle flight took place in 1981. Since then, more than 100 shuttle missions have been flown, but in many respects the shuttle program has failed to meet expectations. The program has always exceeded budget, has been plagued by difficulties, and has flown fewer missions than originally intended. The catastrophic losses of two shuttles and their crews crippled the program.

Moreover, many astronomers condemned the shuttle program as more show than substance, gobbling up nearly all the space exploration money. Many worthy, far less expensive, unmanned missions were canceled over the years.

The shuttle program is a direct contrast to the programs in the early days of NASA, when nearly every one came in early and under budget. In many respects, the 1960s, under the leadership of German immigrant Wernher von Braun—who is widely known and admired for his belief in the Creator God—was the golden era of NASA.

Some attribute the decline of NASA to the change in leadership in the early 1970s when the former German scientists retired. As a devout Christian of impeccable character, von Braun opposed evolution, but after his death NASA began to pursue evolutionary ideas.

Over the years, many changes have taken place at NASA. A few years ago its leadership unveiled the Origins program. Origins consisted of a suite of space missions and other projects to learn about the origin of the universe, stars, the earth, and life. Of course, this was all being done within the evolutionary paradigm.

“Where did we come from? Are we alone? When the answers to these questions are known, our civilizations will evolve new visions of who we are and what our futures might be.”
—NASA

In an April 16, 2002, speech at Syracuse University, NASA administrator Sean O’Keefe stated, “Our effort to understand the universe is to answer the most fundamental of questions. How did we get here? Where are we going? Are we alone?” Such explicit evolutionary goals were not part of the early space program.

Yet God has used “the wrath of men to praise Him.” For instance, at least two of the twelve astronauts who walked on the moon (Jim Irwin and Charlie Duke) later became Christians. They vigorously shared their faith and came to believe in recent creation. Many of the photos from various missions illustrated the handiwork of the Creator, as Psalm 19 proclaims.

Space exploration has shown how special the earth is and how hostile the rest of the universe is to life. Some measurements have born out what biblical creation suggests about space. For instance, the creation physicist Russ Humphreys predicted, based on the Genesis creation account, the magnetic fields of the planets Uranus and Neptune. His predictions were born out by Voyager. In contrast, evolutionary scientists had failed to correctly predict the magnetic fields of those planets.

Many of NASA’s programs attempt to find the origin of life and the universe.

One high-profile future mission of NASA is to search for planets similar to the earth. The goal is to affirm evolution. Evolutionists want to demonstrate that earth-like planets are common and that life likely arose on many of those planets. Yet the extrasolar planets discovered thus far—more than 200—are very different from the earth and are extremely unlikely to have conditions conducive to life. With the aid of new technology and techniques, NASA’s future missions should detect extrasolar planets similar to the size of the earth, if any exist.

The Bottom Line for Believers

Christians may resent their tax dollars going to such seemingly fruitless research, but is it so fruitless? Christians should expect that new discoveries, when properly interpreted based on the Bible, will only enhance the glory of God and improve our understanding of Him.

We have no reason to fear. Based on the Bible’s description that “God formed the earth to be inhabited” (Isaiah 45:18), we may find truly earth-like planets to be extremely rare, if they exist at all.

We also understand that life is a miracle that comes directly from God (Genesis 1:21; Psalm 104:30; etc.) and that it did not arise spontaneously. We expect that much of the Origins program will produce findings that yield no positive evidence for evolution. When that happens, we can use that evidence ourselves to praise the Creator and demonstrate how reasonable it is to believe what God has revealed about creation in His infallible Word. 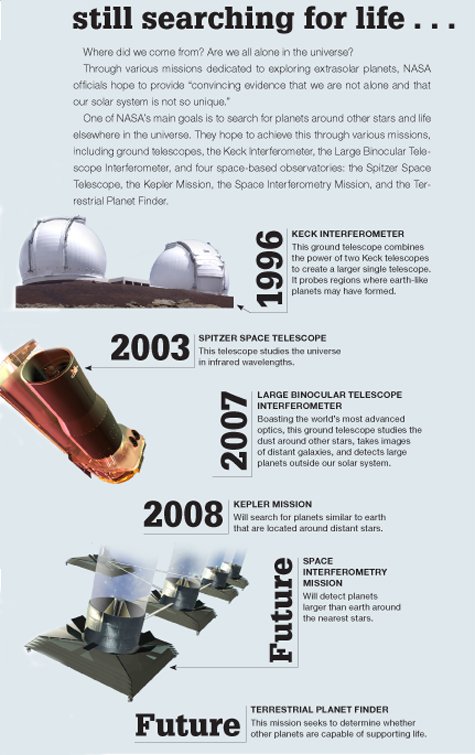 Previous Article Far Out Claims About Astronomy Next Article Do I Believe in UFOs? Absolutely!