Betelgeuse Is Back in the News

The star Betelgeuse drastically faded in 2019, but now it’s back to its normal, bright self—what that means for stellar evolution or creation

As I reported early last year, the bright star Betelgeuse drastically began fading in 2019. Betelgeuse is a semiregular variable star, meaning that its light varies. But the fading in 2019–2020 was unprecedented. Because Betelgeuse is a red supergiant, the type of star that astronomers generally think eventually erupt as supernovae, there was some speculation that its unusual dimming might be a harbinger of a big blow. However, most astronomers thought such a blow was unlikely any time soon, and they expected Betelgeuse would soon recover. Sure enough, in February 2020, Betelgeuse reached minimum brightness, and its brightness began to increase. By this past winter, Betelgeuse was back to its normally bright self.

The more likely scenario was the eruption of much dust into the atmosphere of Betelgeuse.

What was responsible for Betelgeuse’s unusual behavior? In my previous two articles about Betelgeuse, I briefly explained two possibilities. One possibility was that the dimming was a consequence of a beat frequency between two and possibly three long-period cycles of pulsation in Betelgeuse. However, the more likely scenario was the eruption of much dust into the atmosphere of Betelgeuse. According to a new report, this dust was injected in the south polar region of Betelgeuse and then spread throughout its atmosphere, temporarily blocking light inside the star from escaping. As the dust was blown away, the atmosphere cleared, and Betelgeuse’s light was able to shine through largely unencumbered once again. 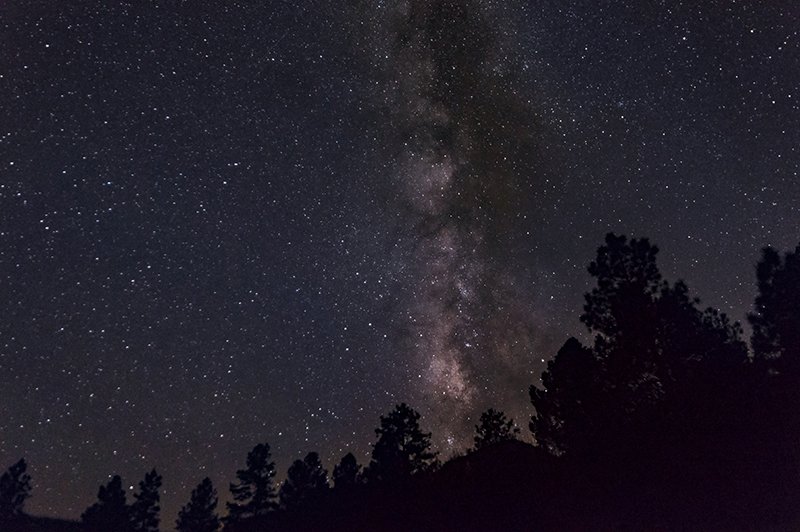 The Milky Way is the glow rising from the trees and tilted slightly to the right. Notice the dark splotches along the plane of the Milky Way. These dark areas are dust clouds blocking the light of more distant stars.

Most astronomers think that the atmospheres of cool stars such as Betelgeuse are the sites of dust formation. Some of the elements that form dust are found in stars, but astronomers think that red giant stars synthesize many of these elements through nuclear reactions that power these stars. These elements are produced inside the stars and then dredged up to the atmospheres by convection within the stars. The very extended atmospheres of cool giant stars are chaotic. Shock fronts in the atmospheres probably manufacture the dust particles. The chaos of the atmospheres also causes large (gaseous) winds to blow off red giants, which carry the dust particles along with them. This is how Betelgeuse probably cleared much of the dust that caused dimming in 2019–2020. Astronomers have known about these winds blowing off Betelgeuse for years. Presumably, it is these winds that carry dust into the ISM, where it mixes with other components of the ISM (gas at various temperatures).

Dust plays a crucial role in many evolutionary ideas in astronomy.

Dust plays a crucial role in many evolutionary ideas in astronomy. For instance, cooling by infrared emission from dust embedded in gas clouds is one of the primary mechanisms thought to cause clouds to collapse and form stars. However, this explanation does not tell us where stars ultimately came from because one must first have stars before dust. Furthermore, dust particles are thought to have played a critical role in the formation of solid bodies in the solar system, such as planets, asteroids, and comets. Presumably, without dust, these objects could not exist. Of course, without the earth, life could not exist. But dust in the ISM is thought to play a crucial role in forming molecules in space. So, without dust, forget the organic molecules that dust presumably formed and then delivered to earth where life supposedly developed naturalistically. It’s no wonder that many astronomers say that we came from stardust. As I’ve commented before, this line of reasoning amounts to a new secular religion, where stardust is our creator.

Of course, biblical creationists reject these evolutionary musings. Man came from the dust of the ground (Genesis 2:7), not stardust. But the natural man rejects this truth because it is foolishness in his futile mind (1 Corinthians 2:14; Ephesians 5:17). Romans 1:18–32 goes on to say that because men reject the clear understanding that God has created us, God has given them over to believe all sorts of false things and to practice all sorts of wickedness. This evolutionary thinking that contradicts Scripture is rampant in the world today.