She thought it was a great discovery. However, the painting was done by Gypsy the chimpanzee.

The painting in the photo shown below caused at least one art expert1 to ‘shiver with excitement’ when she saw it. She thought it was a great discovery. Its worth? ‘We’re talking thousands of dollars, rather than hundreds,’ she said, pointing to a picture on the wall of a similar painting valued at $300,000, an abstract expressionist work by the Cobra school of painters. However, the painting below was done by Gypsy the chimpanzee2 (shown left). Others fooled apparently included a Sotheby’s agent and some leading Bond Street art galleries.

Does this show a human-like ability in a chimp? We think it shows the tremendous decline in standards of Western art. This has happened, logically, as people have more and more absorbed Darwinian thinking (chance is the creator—there are no absolute values). The exquisite paintings of nature in the post-Reformation period reflected the intricate handiwork of the Creator, and expressed the creativity of man created in His image. When people began to see man as a meaningless product of chance processes, the beauty and integrity of art began to deteriorate.3 In some instances now, art looks more like chance processes have been at work! 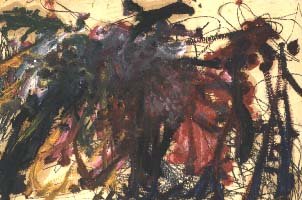 Newspaper art critic Robin Simon said of this ‘painting’ done by a chimp haphazardly splashing paint on to canvas, ‘To tell the truth it looks as good or as bad as 90 percent of the paintings hanging in some of the trendy galleries in London.’