Recent invasions of massed jellyfish prompted new studies of these ocean terrors. Scientists were astonished by what they found.

If you threw in a dramatic film score, the horror story could play out like an end-of-the-world summer blockbuster. Millions of pulsing blobs invade the planet and wreak havoc. Nuclear power plants shut down as the creatures gum up the water intake valves. Hordes of fish suffocate and die as the blobs swarm around them and suck up the oxygen. In the waters off Spain’s Mediterranean coast, swimmers scream in terror as incoming tides are filled with stinging tendrils. Japanese fishing boats radio an alarm that giant swarms of white creatures are approaching from the East China Sea.

But you don’t need a special effects team to pull off this cinematic feat. You’d only need your smartphone’s camera (and a big travel budget). These are true-to-life moments from around the world over the last decade. The Attack of the Jellyfish is completely nonfiction.

Now, before you buy an underground bunker or avoid the oceans for the rest of your life, let’s take a closer look at these invading creatures. While these animals do sting and suffocate and jam things up, we know from the Bible that God designed our world and everything in it with perfect wisdom, including all the organisms that call this planet home. So, what purpose did He have for designing something that can cause such pain and fear? Really—what’s the point of jellyfish?

Well, let’s just say that there’s more to these ocean marauders than what appears on the surface. 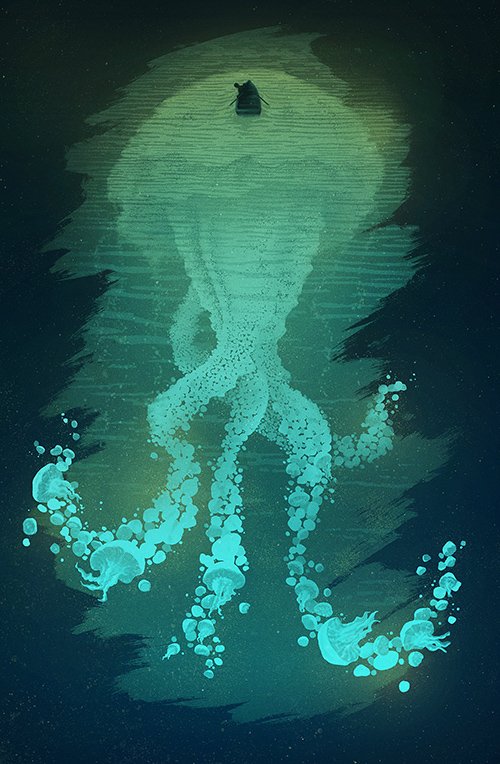 If you needed a perfect ocean villain, you’d be hard-pressed to find something more difficult to track and capture than the jellyfish. The most well-known types are essentially bags of water with stinging tentacles. They eat constantly, they reproduce in overwhelming blooms that choke the seas, they turn a morning swim into a painful, goopy experience, and they don’t seem to contribute much to the balance of ocean life.

At least, that’s how researchers used to view them.

You see, the problem with studying an organism with the consistency of slime is catching it and tracking it. With fish, you can just drop a net in the water and scoop them up. You can tag sharks and track where they roam. Larger, boney animals show up in the stomachs of other marine life, if you care to look (and lots of scientists do).

But these gelatinous things known as jellyfish—or jellies—don’t follow the rules. Most nets simply shred them into goo, and tracking devices don’t exactly stick well. (What would you pin them to?) So, when moon jellies flood the waters off Florida or the Puget Sound near Olympia, Washington, studying their role in the ocean ecosystem has proven difficult. What’s more, Cnidarian cuisine (that’s jellyfish du jour) disappears quickly when animals gobble it down. Scientists looking in guts of fish might find the tiny zooplankton that jellies eat but no jellies! That makes it tough to know if hungry sea creatures had a jelly for dinner.

With all those difficulties, marine biologists tend to study wildlife that is, well, relatively easy to study. But in recent years, the obnoxious jellyfish have become hard to ignore.

“It was sheer devastation. I’ve been 30 years in the salmon industry, and I’ve never seen anything like it.”

In November 2007, a mass of mauve stingers—blanketing 10 square miles of ocean (the size of a town)—floated into newspaper infamy. It began one morning when staff at the Northern Salmon Company in Northern Ireland noticed a reddish-brown tinge to the sea. They soon realized the tinge was a swarm of jellies about 35 feet (10 m) deep. When the staff reached the cages where they kept their salmon, they found the fish dead from suffocation. All 100,000 of them.

We’re learning that God created jellyfish with an important part to play in the health of our watery world.

Similar terrifying incidents have taken place near Japan and elsewhere, sparking fears that the useless floating blobs are now taking over the oceans. At first, some researchers blamed overfishing, saying that the loss of fish opened up too much living space for the jellies. They also pointed to climate change. Warm waters give the juvenile, plantlike polyps the conditions they need to send out droves of medusas (the bell-shaped adults that produce more jellies). Most experts assumed that jellyfish had few predators and that they sank to the ocean floor when they died—making a toxic environment for fish if their numbers were too great. This, they claimed, was a recipe for an ecological disaster and needed further study.

While mounting devastation makes for a thrilling plot, conclusive research was hard to come by. When scientists dove deeper, they found organisms that—far from being useless dead ends in the ecosystem—were perfectly designed to fill many valuable roles in the aquatic world. In fact, you could say it was almost as if Someone (that is, the Creator) planned it to be that way.

In 2013, a swarm of moon jellies forced engineers to shut down a reactor at Sweden’s Oskarshamn nuclear power plant when the jellies clogged the pipes in the reactor’s cooling system.

Perhaps it’s fitting that a group of jellyfish floating together is called a “smack.” Modern studies of them have proven both contentious and surprising. The ingrained image of useless, dangerous jellyfish has taken time to shake. But years of study are yielding some fascinating facts that point to God’s design for a complex web of organisms to survive in our fallen world.

Luis Cardona of the University of Barcelona (Spain) is one scientist making astonishing new discoveries. He turned his attention from sea turtles, which eat jellyfish, to find what other animals might also feast on jelly delicacies. Since he couldn’t find jellies in stomachs, he looked for chemical signatures from the jellies (incorporated in the tissue of predators). While this technique isn’t perfect (as critics have pointed out), Cardona gathered strong evidence that young bluefin tuna may dine on a diet of up to 80% jellyfish. They’re also likely on the menu for little tunny (another type of tuna) and spearfish. All three are staples of the undersea ecosystem.

In other parts of the world, feathery predators also have a penchant for cnidarian nutrients. Scientists in Antarctica examined the waste left by Adélie penguins and found an abundance of jellyfish. The same taste for jellies has shown up in gentoo, king, macaroni, and rockhopper penguins, as well as albatrosses. Far from being an ecological “dead end,” jellyfish may very well be a smorgasbord for the birds.

But jellies are good for much more than food. Perhaps the most fascinating discovery involves the life cycle of the spiny lobster. While adults of these crustaceans find their way onto many a dinner table, their larval stage has long been something of a mystery. But scientists found an interesting clue in 2011 off the coast of western Australia. When the researchers hauled in a gelatinous, jellyfish-like creature called a salp, they found six lobster larvae embedded in the animal itself. In fact, the tiny crustaceans had been feeding on their host along the way.

The researchers suspect that lobster larvae may depend on jellyfish and similar creatures like a floating buffet and protective nursery squished into one. This may not seem like cooperation exactly, but the free ride allows the lobsters to move quickly into new ecological niches around the ocean. And like many symbiotic relationships, it doesn’t necessarily “hurt” the jellyfish to share its materials, as long as the relationship is kept in balance.

Jellyfish serve a much greater purpose, like all God’s creations have since the beginning. Similar to butterflies in the field, these water wonders come in many shapes and colors (and some even light up), to the wonder and admiration of all humans. In many aquariums they are featured as a “living art gallery” framed by golden borders, where we watch them float safely behind the glass. From there, we can appreciate their mesmerizing variety—from the tiny creeping jellyfish to the stunning lion’s mane, whose tentacles reach 120 feet (36.5 meters, or about the height of an 11-story building).

The Creator has left testimonies of His glory in the common places of the sea, as well as the land. Perhaps this blooming field of study, originally prompted by fear, will bring to light many other wonderful purposes that jellies serve in their environments.

Not a Noxious Trash Heap

But before we leave this everywhere-present wonder of the sea, consider one more legacy that has come to light. What happens to the decomposing blobs after the mass blooms die? That’s a question oceanographer Andrew Sweetman wanted answered in 2010.

Many researchers assumed jellyfish just pile up on the seafloor during a “jelly fall” (mass jellyfish die off). So, to test this idea, Sweetman lowered a camera rig to the bottom of Lurefjorden in southwestern Norway. He expected to find piles of rotting organisms all around, creating a noxious brew for fish. But he didn’t. In fact, he found almost no jellyfish at all.

Like any good detective in the movies, Sweetman decided to lay a trap to catch the culprit. He lowered a bunch of dead cosmopolitan coronate jellyfish in front of his camera rig. Almost immediately, scavengers such as hagfish, crabs, and shrimp descended on the carcasses and gobbled them up. In fact, nearly one thousand ravenous animals showed up at a time. (Talk about your dinner rush.) He found the same results in the Pacific Ocean as well. 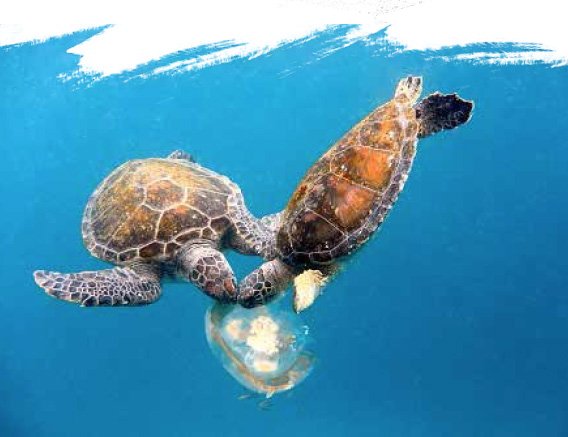 Researchers have discovered that sea turtles, along with many other sea creatures, eat jellyfish. Some tuna species’ diets may be up to 80% jellies.

Rather than smothering the seafloor, jellyfish appear to serve an important role in transferring nutrients throughout the ocean. Even before Adam’s fall, jellyfish would have served as excellent vehicles to grow and distribute microbes, which keep the sea stocked with a healthy balance of nutrients like nitrogen and carbon. More research is needed.

That’s not to say jellyfish can’t cause problems. (Just ask anyone who’s been engulfed in a stinging swarm.) When a large bloom fills an area, less food is available for fish and other sea life. And, as mentioned earlier, they can put a crimp in the fishing industry.

Yet even in a fallen world, these gelatinous blobs provide food to numerous animals, help keep fish populations in check, and distribute vital nutrients throughout the ocean. Not bad for something that’s mostly a bag of salt water.

So, the next time you’re forced to scoot out of the water and onto the beach because medusas have meandered in, remember that they aren’t a pox on our oceans. They truly are one of God’s great wonders.