Having propelled themselves out of the water with great force, they spread these fins out like wings to glide through the air for up to several dozen metres.

The members of the fish family Exocoetidae, one of the families known as ‘flying fish,’ possess enlarged pectoral fins. Having propelled themselves out of the water with great force, they spread these fins out like wings to glide through the air for up to several dozen metres.

The Darwinist sees this incredible feat as a chance development. The belief is that once upon a time a fish like this, but with ordinary fins (and so, lacking the ability to glide) had offspring in which, by a chance genetic accident, the pectoral fins were just a few millimetres longer than normal. This was supposed to have given it a survival advantage, because when it was chased by predators, it could glide a fraction longer after leaping out of the water. 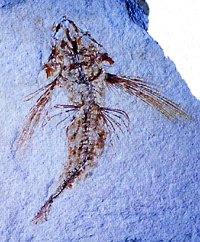 The ‘flying’ fish Exocoetoides minor, fossilized in Lebanese Cretaceous rock. This rock is alleged by evolutionists to be around 100 million years old. The fossils indicate that flying fish have always been flying fish.

The ones that could glide less well were more likely to be eaten. By this means, it is believed and taught, the flying fishes gradually evolved to their present situation, with very long pectoral fins.

Fortunately for those who are sceptical of this evolutionary theory, there are fossils of such ‘flying’ fishes found in rocks, which enable us to put it to the test!

The example shown in the photo here, which is from Cretaceous rock in Lebanon, shows that the ‘earliest’ known Exocoetidae had pectoral fins which were just as enlarged as those today. None are known showing the ‘part-enlarged’ fins which evolutionists would predict. There are other fossilized fish with equally enlarged pectoral fins in so-called Triassic rock—which, if one were to believe the evolutionary age dating scheme, would be even 100 million years earlier. This certainly adds up to bad news for believers in the evolutionary origin of the flying fishes.