Mothers have long been the standard for sacrifice, patience, and enduring love. The most devoted moms are sometimes called “mama bears”—and for good reason. But the ferociously protective mother bear has nothing on the intense ways God has equipped some animal moms to care for their offspring and to teach them survival in our fallen world. 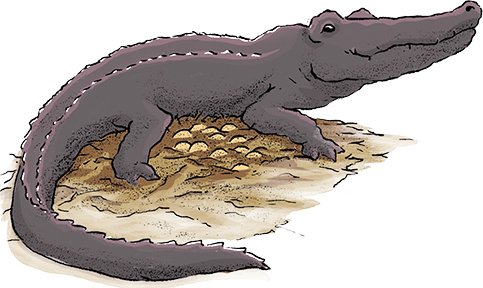 But whether the eggs are male or female, once they hatch, the mother loads the hatchlings into her mouth and carries them to the water where she immediately begins training them for gator life. For up to two years, the hatchlings stay with their mom, and if they’re ever in trouble, they know who to call. 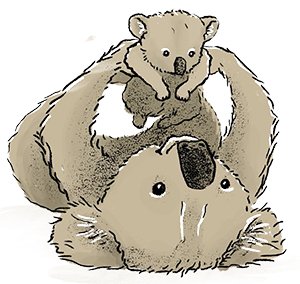 For human mothers, labor is a painful experience. But the koala mom can’t relate. Her tiny joey emerges from the birth canal and nestles in her pouch all by itself. For about six months, the mama koala’s pouch produces milk for the growing baby. But around 30 weeks, the joey’s menu transitions from milk to something less . . . traditional. Produced in a pouch (cecum) between the mother’s small and large intestines, pap is a special poo-like substance that consists of finely digested eucalyptus leaves that retain rich nutrients. In pap, the mother koala passes along her gut bacteria to help the joey digest its future diet of tough, toxic eucalyptus leaves. Once its teeth come in, the joey is ready to munch on its leafy diet—a meal surely more appetizing than poo! 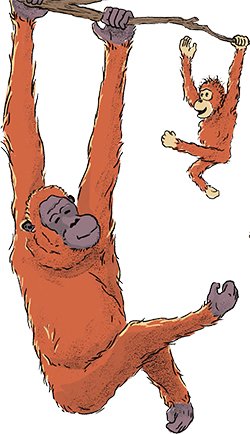 When it comes to parent-child relationships in nature, orangutans don’t monkey around. An orangutan mother carries her baby everywhere for up to five years and might breastfeed for up to eight years. Even after that, she teaches her young which trees provide seasonal food, and shows them how to eat a variety of nourishment, including fruit, honey, and even vines. The mother orangutan also gives new meaning to “make your bed” by teaching her baby to build a bed from tree branches.

After the orangutan baby finally leaves the nest, it will check back in on mom until it’s up to 16 years old. Not your typical teenager! 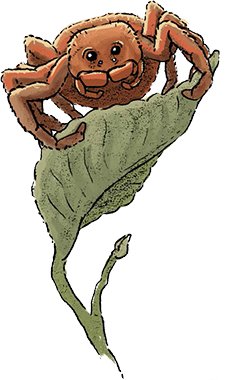 Most mothers will do anything for their children, but the Mediterranean velvet spider takes devotion a step further. Even before her spiderlings hatch, the mother instinctively starts cooking up something special for their first meal—herself. The abdominal tissue and organs inside the velvet spider mother begin to liquify so that after the spiderlings hatch, she regurgitates a bit of the liquid to feed her babies (an act known as matriphagy). Her body continues to degrade as the spiderlings grow. When they are two weeks old, the spiderlings pierce their mother’s abdomen and drain her liquified body before scurrying off. The mother spider is programmed to give her life so her young can have a nutritious head start for surviving their harsh environment. 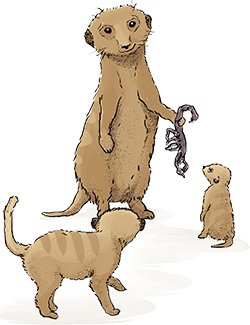 Taking the Bite Out of Lunch

A meerkat mother gives birth underground to hairless babies called pups. She doesn’t do a lot of work early on. Instead, she makes other females in the burrow nurse her babies. But as her pups grow, the meerkat mom helps train them to carefully stalk and catch a favorite food source—scorpions.

A meerkat mother presents dead scorpions to allow her pups to safely practice biting the prey’s head or abdomen without being stung. Next the mother upgrades to live scorpions without a stinger. If a pup seems afraid, the mother gently nudges the prey toward it, and if the prey wanders off, the mother brings it back. Once the pups seem competent with disabled scorpions, they start hunting the real thing without fearing that lunch will bite back.

Previous Article Slow Loris: Fuzzy Can Be Fatal Next Article Mirroring the Maker