Many species of the plover (sub-family Charadrinnae) [photo 1] exhibit a most remarkable behaviour. Their nests, lined with grass and leaves, are usually made in a depression on the ground or simply in long grass. When sitting on her eggs, the female is almost invisible until one draws very close. If an intruder such as a hawk or fox is in the area, the bird will remain dead still until the last minute. 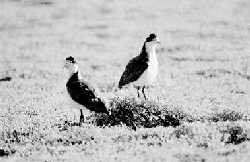 If it seems likely the intruder will discover the nest, the bird will suddenly rear up and run in a seemingly disorganized pattern, thus distracting the attention of the invader away from the nest, the eggs, or the chicks. As it runs, the plover begins to apparently stumble and struggle as if it has a broken leg or a broken wing, giving the impression it is disabled and defenceless.

But this performance is anything but random. As she stumbles around, the mother bird steadily and imperceptibly works her way ever further from the nest, drawing the intruder after her with the lure of an easy meal. Within a minute or two the plover is many metres away from her nest. If attacked, she will magically “recover” and fly off to a distance, watching the invader closely. When the intruder has departed, the mother bird returns to the nest.

Storks (family Ciconiidae) [photo 2] make their nests of sticks, reeds and grass, in tall trees. When the chicks hatch, their thin, featherless skin is extremely vulnerable to the direct rays of the sun. The parent bird has two responses to the high temperature problem — if water is nearby, the stork fills its large beak, returns to the nest, and douses the tiny chicks with cooling water. If this is not sufficient, the parent then performs a most remarkable feat — it stands over the young and spreads its large wings over the entire nest, thus shading the chicks from the sun’s rays! Often it will do this for hours at a time.

How did it happen? 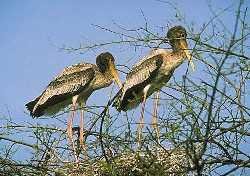 It is, of course, not plausible that birds, with their tiny brains, reason these sorts of behaviours out for themselves. Such behaviours are automatic and triggered by the appropriate circumstances. How and when did plovers and storks acquire these remarkable abilities?

There are only two real possibilities — one is that the programming for this behaviour was in the genetic code right from the beginning, from the first of each of the respective kinds.

The other is time plus chance: natural selection, “choosing” from the alternatives thrown up by random inherited copying mistakes, has, in a blind unthinking way, programmed this behaviour over millions of years.

Evolutionary “just so” stories are notoriously difficult to put to any sort of test. One would have to believe in an incredibly fortuitous series of mutations having to occur in the right sequence and at the right time.

The obvious alternative seems much more logical and plausible: just as a computer requires a designer and builder, so this remarkable programmed behaviour required the existence of an intelligence above and beyond itself. The Bible points to this intelligence —the Creator God.