Living jewels of dazzling beauty inhabit the rainforests of Central and South America. But these poison dart frogs didn’t earn their nickname because of the beauty. This amazing creation has a sinister reputation, but is it deserved?

The family of poison dart frogs (Dendrobatidae) boasts over 245 species, displaying an astonishing array of colors and potency.1 The brilliant colors and patterns range from strawberry red, canary yellow, and sunny orange to metallic green and black with yellow polka-dots. When eaten, some merely taste bitter or irritate the predator’s mouth with burning or numbness; a few, however, are truly deadly, even to humans.2

Despite their deadliness, these dazzling creations hold the promise of benefitting all our lives. How can this be, you ask?

Consider the golden poison dart frog. It is, in a word, gorgeous. Though no more than 2 inches (55 mm) long, this magnificent frog stands out like no other in the dim forests of Colombia, South America.

Yet another word is equally appropriate: deadly. The golden poison dart frog, also known as the terrible dart frog, exudes one of the deadliest toxins known to man. The equivalent of just two grains of table salt (less than 1 milligram), flowing in a person’s bloodstream, can cause death in mere minutes. In fact, animals can die just by touching a spot where a golden dart frog has recently been.

Few other creatures can match the toxins of this beautiful killer. 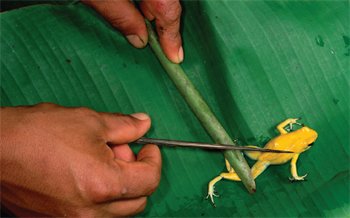 Hunters from the Embera tribe in Colombia catch small golden dart frogs and rub their darts on the frogs’ backs.

Poison dart frogs, or simply dart frogs, actually get their name from the fact that native peoples of the Chocó region of Colombia use their toxin when hunting spider monkeys and other game. Hunters of the Embera tribe will catch small golden dart frogs, rub their darts on the frogs’ backs, and then load the darts into their blowguns. With this deadly weapon, they can take down monkeys, birds, or even jaguars.

Scientists estimate that just one of these potent frogs has enough poison to kill 10–20 adult men, so the natives must use caution when rounding up their unwitting little hunting partners. They carry them in small wicker baskets until they need more poison.

So the frogs themselves are not fierce predators (unless you happen to be an ant crossing their path). Their toxins are only for defense, and they possess another tool that may be just as critical to their protection: bright colors. Scientists suggest that the bright colors benefit dart frogs by warning predators of their toxicity. Predators know to avoid these bright amphibians, but exactly how they know—or learn—about this danger remains a mystery.

Scientists are intrigued by the complex molecules that dart frogs can produce. They are extremely powerful nitrogen compounds known as batrachotoxins (literally, “frog poison”). This special form of neurotoxin (“nerve poison”) interferes with the transmission of nerve impulses. One drop can cause the human heart to stop beating.3

If absorbed into the bloodstream through the eyes, nose, a cut, or even directly through the skin, the poison is capable of causing convulsions, paralysis, and death. But that capability is not what interests scientists most.

The phenomenal ability to suppress nerve impulses could lead to new drugs that help patients who are in great pain. Epibatidine, from the Epipedobates dart frogs, blocks pain two hundred times more effectively than morphine, without addictive or sedative side effects.4 Researchers hope to synthesize compounds similar to epibatidine into new, safe, effective painkillers.5 The possibilities seem too good to be true.

So something that seems so bad may actually serve a good purpose in the end.

Despite poison dart frogs’ deadly toxins, many people enjoy keeping them in captivity. In fact, the Creation Museum, where we authors work, hosts an exhibit of live dart frogs. Isn’t that dangerous?

Actually, not at all. These amphibians gradually lose their toxicity when removed from the rainforest and their normal diet. In fact, those hatched in captivity are never poisonous. The frogs must eat their natural prey, which includes a high percentage of ants, in order to produce the toxins. Some scientists speculate that the ants obtain the necessary compounds from the plants they eat.

And that reinforces a very important lesson these wonderful frogs teach us. In the original “very good” world that God created (Genesis 1:31), no frogs were dangerous. Adam and Eve could hold any beautiful frog, admiring God’s handiwork, without fear of harm.

The golden poison dart frog may be the deadliest animal on land, but his other family members still pack a punch. Scientists don’t dispute the top three killers, while the others are too close to call.

(Listed left to right)
Phantasmal Poison Frog, Epipedobates anthonyi: This toxin can kill any natural predator. Interestingly, scientists hope to develop a powerful painkiller based on its chemistry.
Variable Poison Frog, Ranitomeya variabilis: This is the most toxic frog in its genus. Theoretically, the toxins in one frog could kill up to five humans.
Blue Poison Dart Frog, Dendrobates tinctorius, “Azureus”: Though not deadly to humans, this colorful frog paralyzes predators and can kill them.
Strawberry Poison Dart Frog, Oophaga pumilio: This beautiful species causes serious burning and swelling but is not deadly to humans.

But Adam and Eve’s rebellion against God in Genesis 3 brought all the pain, death, and evil into the world. What were poison dart frogs like before the Fall? Just as the frogs in captivity are not toxic, before sin no animal would have caused harm. Perhaps the original dart frogs didn’t produce the chemicals until after the Fall, just as plants didn’t originally produce thorns and thistles. Or perhaps the same substances were present but simply not harmful before the Fall. (Today, one small snake can even eat the terrible dart frog without ill effects.6)

We can see God’s creativity and wisdom in the design of dart frogs, as in all the rest of His creation. Their dazzling beauty and variety show His creative genius. He gave them protection from predators in a fallen world. We can even see God’s provision for man, supplying substances that help the people who live in the rainforest acquire food, and now it appears the chemicals may help us develop new medicines to treat diseases and pain. Things that at first seem completely destructive—such as deadly toxins—can be used to nurture life. What else would we expect from a God who gave His life to save ours?

Perry and Stephanie McDorman are employees of Answers in Genesis and both have biology degrees. Stephanie is Creation Museum registrar, overseeing the museum’s collections, and Perry is museum naturalist and maintains the indoor live exhibits at the museum, including the poison dart frog exhibit.

Previous Article The Value and Limits of Scientific Evidence Next Article Is Voting Enough?