Is America Becoming More Christian or Less Christian Every Day?

Who are the world’s “new fascists,” according to a new Simon and Schuster book composed by a former New York Times correspondent?

Well, the new fascists are … Bible-believing Christians! And the growing legions of creationists are on the frontlines, implies the author in chapter 6.

But that’s not all. Chris Hedges in American fascists: the Christian right and the war on America declares that evangelical Christians are poised to take over the country! He writes: “Those arrayed against American democracy [i.e., evangelical Christians] are waiting for a moment to strike, a national crisis that will allow them to shred the Constitution in the name of national security and strength” (pp. 201–202). Already, declares Hedges, “this minority … is taking over the machinery of U.S. state and religious institutions” (p. 19). We guess someone started the “revolution” without us! This new book by a Harvard Divinity School graduate essentially labels Answers in Genesis and its supporters with that fascist label. He even draws several comparisons between Bible-believing Christians and the Nazis of Hitler’s time.

Hedges sees creationists as playing a major part of this alleged fascist takeover. He especially highlights AiG’s soon-to-open Creation Museum, which he describes as a place that “presages a society where truth is banished” (p. 128).

Chapter 6 devotes huge chunks to AiG and the museum. Hedges views AiG as a group that proclaims a “subversive message … that it’s OK to believe what we want, to believe lies” (p. 115). More dangerously, he says, is that the goal of the creationists “is the destruction of the core values of the open society” (p. 116).

How ironic, we should note, that an advocate of a so-called “open society” won’t tolerate any questioning of the evolution belief system—and its millions of years—in schools and other public places. Also, think about it: how often do you hear of a Bible-believing Christian committing an act of violence against society? Not often. That’s a powerful counter to Hedges’ claim that we are Nazi-like. And think about this: is America less Christian or more Christian as a whole today? It’s becoming less Christian, as the castle illustration, left, shows. There are several factual errors about AiG in his chapter on creationists (see our expanded review of the book). Some are so egregious that they only help to expose how biased he is against biblical Christianity. In one small example (yet it shows how continually careless he is), Hedges describes our museum’s “towering” animatronic T. rexes (p. 113) as hovering over the animatronic children in our museum’s main hall. But the dinosaurs, while very realistic-looking, are perhaps only 2-feet high! (See the photo below.)

Although Hedges insinuates that the creation movement (especially AiG, for he spends most of his chapter on us) is a major part of America’s religious right and its fascist tendencies, AiG is apolitical. It avoids the political arena. It’s not our job to change the culture—it’s our job to disseminate information, proclaim the gospel, and stand on the authority of God’s Word … and THEN see hearts changed for the Lord. 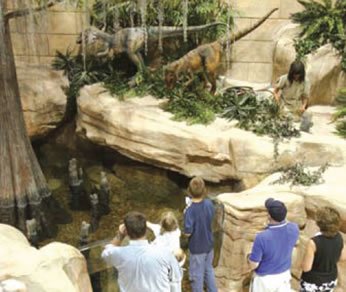 Now, if these changed lives impact the culture, and if God blesses that, then we’re happy to see it. But we’re not going to be an activist ministry in the sense of legislating, litigating or lobbying key leaders to mandate change in society. Who are the people manifesting fascist tendencies 60 years after Nazi Germany? It’s those who, in the name of tolerance, will refuse to tolerate those who are perceived as intolerant (i.e., those who hold to absolute standards, such as Bible-believing Christians).

In fact, Hedges quotes (sympathetically) the late philosopher Karl Popper, who once wrote that we can “therefore claim, in the name of tolerance, the right not to be tolerant of the intolerant” (p. 1). The inconsistency is so glaring to us. Hedges’ self-proclaimed open-mindedness and tolerance absolutely falls apart when he attempts to rationalize his (clearly obvious) hypocrisy. He has even publicly chastised liberal humanists (of which he is one) who believe in inclusiveness and who express any willingness to dialogue with evangelicals.

He also does not appear to understand that while he howls at Christians’ attempts to impose their views on society, Hedges wants to see that it’s his views that should be imposed. It is Hedges and his ilk who see Christian bogeyman lurking around every corner. These are the people Americans should fear, for they manifest an intolerance of anything that goes against their evolutionary, humanistic worldview.

Previous Article Evolving Agendas Next Article Back to School “the Temples”