Atheists Worldwide Gather to Celebrate Something They Don’t Believe In

Over the next few days in my homeland of Australia, atheists are converging from around the world in the city of Melbourne for what many of the organizers are calling a “celebration of atheism.” 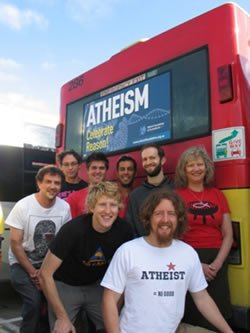 This bus ad in Melbourne, Australia, coincides with that city’s hosting of an international atheist convention this week and represents how the group is promoting the event. (Photo from http://scienceblogs.com/pharyngula/2010/
03/nice_sign.php)

Over the next few days in my homeland of Australia, atheists are converging from around the world in the city of Melbourne for what many of the organizers are calling a “celebration of atheism.” I commented on this atheist meeting in my January 16 blog post and have adapted it here as a commentary on a convention that has apparently become so popular that it is a sell-out.

Let’s consider some of the down-to-earth practicalities of what a large convention of atheists is trying to accomplish as they hold this major international convention.

If a person is an atheist, does not believe in a supernatural Being, and holds a blind-faith belief that the universe and life can be accounted for by natural processes (which is is now, by and large, taught in the public education system), then what happens when atheists die?

Of course, from their perspective, they cease to exist and wouldn’t know anything of their past life. Most atheists believe that eventually the whole universe will die a heat death, and ultimately there will be non-existence for everyone. So, then, what is the point of anything an atheist will do now anyway, when there will be a time (from their perspective) of no consciousness—nothing to be remembered? It will all be nothingness.

Atheists may (subjectively) claim that they make their own meaning and purpose right now. But so what? What they decide is just a meaningless opinion anyway. They may claim (as some have) that all people should follow the “Golden Rule”—but, ultimately, why? And even if some atheists agree with accepting the Golden Rule, that is just their subjective opinion. Why shouldn’t others chose to have different “rules”? After all, if there is no absolute authority, everyone is free to make up rules if they want—and if they can get away with it.

Today’s secularized era reminds me of verse 25 of Judges chapter 21: “In those days there was no king in Israel; everyone did what was right in his own eyes.”

If atheists were consistent (and they are not; they are living inconsistently in a world without purpose and meaning), why even bother to try and impose their views on others? Why get upset with Christians/creationists? Why spend so much money to put up billboards and place ads on buses? What’s the point anyway? Ultimately, no one alive will know he or she ever existed. Why bother trying to assist people in earthquake-devastated Chile or Haiti, for example? 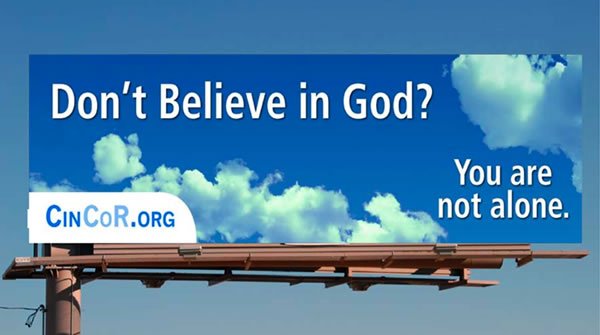 In the Creation Museum’s backyard, a billboard in Cincinnati proclaims the atheistic worldview of meaninglessness and purposelessness.

Now, I totally agree that we should help such needy people in Chile and Haiti, and that’s because my worldview is based on an absolute authority, the Bible—not just an opinion. The teachings of Scripture dictate that I love my neighbor and help them in their need. But why should atheists care?

Now, they can say it is important to be philanthropic, but from a consistent atheistic philosophy, why? If we are all just matter—mere molecules in the universe—and our consciousness will cease one day, ultimately what’s the point of doing anything—including gathering at a convention in Australia to discuss something participants don’t believe exists (God)? Atheists can offer whatever subjective opinions they want, but, ultimately, why does it matter so much to them?

Only Christianity and its teachings can explain the purpose and meaning of this world—and also gives the basis for right and wrong, good and evil, etc.

Ultimately, I submit that atheists are shaking their fist at the very God they claim does not exist. In essence, they are refusing to be accountable to anyone. They don’t want to recognize their sinful nature and that they are in rebellion against God. Furthermore, they don’t want to acknowledge that they are in need of salvation. Essentially, they want to be their own “gods.”

This phenomenon also happened in Genesis chapter 3, where Satan came to Adam and Eve and tempted them with the promise: “You can be as gods.” In other words, you shouldn’t obey God—become your own god. Today, that remains humankind’s basic problem—people want to be their own god, and they continue to rebel against the true God.

Answers in Genesis is an organization dedicated to taking the message of salvation to all people (including atheists) and declaring that God Himself stepped into history to pay the penalty for our sin so that a relationship with our Creator can be restored—and then we will live with our Creator for eternity. That is the true purpose and meaning of life.

And as the Bible reminds us in Romans 1, we are all “without excuse.” The atheists gathering in Melbourne are “without excuse”; it is written on their hearts that there is a God. For all their raving, ranting, and name-calling, these atheists will stand before God one day—and they will exist for eternity, though sadly they will be separated from God unless they repent and receive the free gift of salvation. 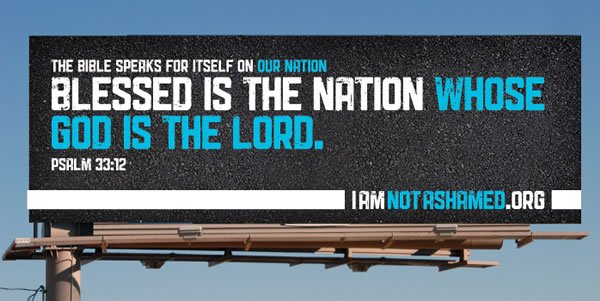 Here is one of the Answers in Genesis billboards that is a part of the “I Am Not Ashamed” national campaign.

To fully understand the right way to think logically about the existence of God, including how to engage a non-Christian in conversation about the God of the Bible, I encourage you to obtain a copy of The Ultimate Proof by Dr. Jason Lisle of our staff and the DVD set Ultimate Apologetics that presents the material in his book. You can obtain both these items from the online bookstore.