This past week, I wrote a short blog entry about the international atheist convention to be held in my homeland, Australia, this year, and commented that atheism is ultimately a meaningless philosophy. Well—that hit a touchy spot with many atheists, many of whom went ballistic on their blogs over my statements. So let’s just consider the down-to-earth practicalities of an atheist philosophy.

If one is an atheist, and does not believe in the supernatural, and believes (and yes, it is all belief—blind-faith belief) that the universe and life can be accounted for by natural processes (this is what is now by and large taught in the public education system to millions of students, where Christianity was thrown out and replaced with the religion of naturalism (atheism))—then what happens when this atheist dies?

Well—from his or her perspective, they cease to exist and won’t know they knew anything—they won’t ever be conscious that there was anything, is anything, or will be anything—they cease to think. Total non-existence! Then from this atheistic perspective, those who knew them when they were alive, when they die, they won’t know each other existed and it will be total non-existence for all of them. Most of them believe that eventually the whole universe will die a heat death, so ultimately there will be non-existence for all. So, what is the point of anything one does now anyway, when there will be a time (from their perspective) when no consciousness will exist to even know anything or remember anything? It will all be nothingness.

Atheists may subjectively claim they make their own meaning and purpose right now—but so what! And it is just their opinion anyway! They may claim (as some have) that we should follow the “golden rule”—but why? And even if some agree with this concept, that is just their subjective opinion—why shouldn’t others have different “rules’? After all, there is no absolute authority, so everyone is free to make up their own rules if they want—and if they can get away with it. Just as it states in the book of Judges 21:25: “In those days there was no king in Israel; everyone did what was right in his own eyes.”

If an atheist was consistent (and they are not—they have to be inconsistent with their own philosophy to live in this world and to even claim purpose and meaning), why bother trying to force their views on others? Why get upset with Christians/creationists? What’s the point? Why bother—ultimately no one alive today will know they ever existed—so why bother? Why bother trying to help people in earthquake-devastated Haiti, for example? Yes, I totally agree with helping such people (my biblical worldview based on a absolute authority, the Bible—not just opinion—dictates that: love your neighbor, help people in need, help the poor, etc.)—but why should an atheist? They can say it is important, or that we need to help our fellow man—but from a consistent atheistic philosophy—WHY? We are just matter—just molecules, and our consciousness one day will cease to exist (from their perspective). Ultimately all people will cease to exist, so what’s the point of doing anything —including people meeting in Australia to discuss something they don’t believe in? They may say it is important they have quality of life while alive—but ultimately they will cease to exist and won’t know they were ever alive anyway, so why does it ultimately matter? Why? They can answer with whatever subjective opinions they want—but ultimately, WHY does it matter?

Only Christianity and the fact that there is an absolute authority explain the purpose and meaning of this world—and gives the basis for right and wrong, good and evil, etc. Ultimately, these atheists are shaking their fist against God. They refuse to be accountable to anyone. They don’t want to recognize their sinful nature, and that they are in rebellion against God. And they don’t want to acknowledge they are in need of salvation. Essentially, they want to be their own “gods.” And this is exactly what happened in Genesis 3 where Satan came to Adam and Eve and tempted them with “you can be as gods.” In other words, don’t obey God—you become your own god. That is humankind’s basic problem—people want to be their own god and continue to rebel against the true God.

Answers in Genesis is an organization dedicated to taking the message of salvation to all (including these atheists)—and to declaring that God Himself stepped into history to pay the penalty for our sin so our relationship with our Creator can be restored and we will live with our Creator for eternity. That is the true purpose and meaning of life. And as the Bible reminds us in Romans 1, we are all “without excuse.” These atheists are “without excuse.” And for all their ravings and rantings and name calling (which is how they usually respond against blogs like this), they will stand before God one day—and they will exist for eternity, but so so sadly, separated from God, unless they repent and receive the free gift of salvation.

One day, all will be brought to light. Death has a way of “leveling the playing field.”

By the way, to really understand logic and the right way to think—and how to argue with a non-Christian, I encourage you to obtain Ultimate Proof by Dr. Jason Lisle of our staff, and also the DVD set Ultimate Apologetics that presents the material in his book. You can obtain both these items from the AiG online bookstore.

Birds on the Brain!

Greg West is a friend of the Creation Museum who lives in our area. Greg has a great collection of pigeons. Last week, he showed off some of his pigeon breeds with staff members and also gave a short talk. Greg is developing a presentation called “Birds of a Feather,” which will use Bible verses related to birds and fascinating information about the amazing ability of pigeons (e.g., the incredible homing pigeon, the tumbling pigeon, etc.). 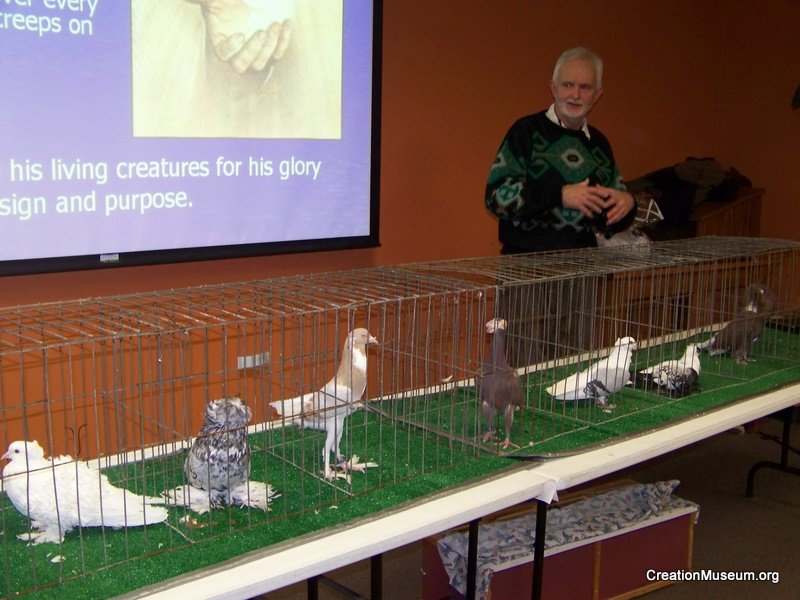 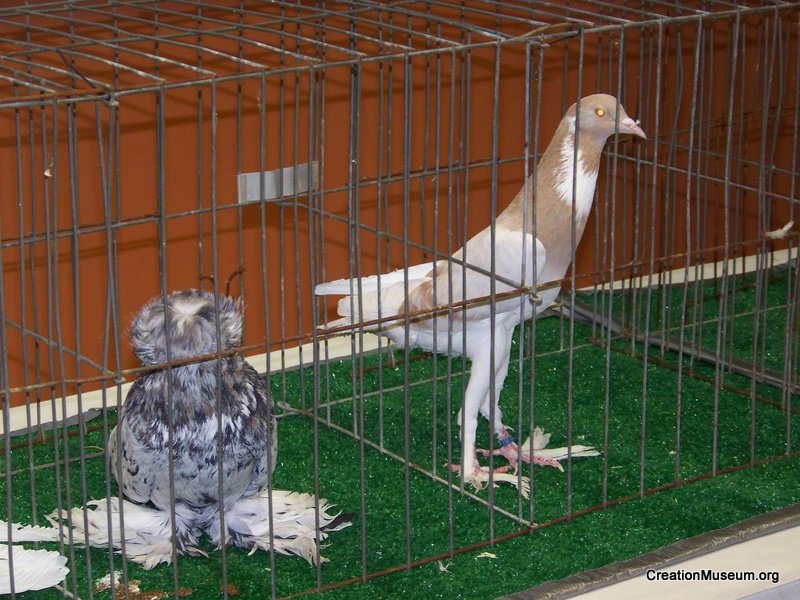 Can you believe that the two pigeons here in this photo are of the same “Genesis kind” made by God on Day 5 of the creation week? It just shows how much incredible diversity there must have been in the original two pigeons!

Greg’s first workshop at the museum is scheduled for January 30 – 1:00 pm and 3 pm. See CreationMuseum.org/events/.