How Could A Loving God...? Buy Book

Underneath these questions was a deeper question still, and it was a question that demanded an answer: Why would a loving God allow, or even cause, such pain, decay, and death?

We buried what was left of Robert’s body on the 12th of June in a quiet cemetery on the outskirts of Brisbane, Australia. Later in the day, we would gather with others in a public celebration of his life, but only those who were closest to him during his earthly life gathered around the freshly dug grave that morning. As the cool winter breeze blew through the forest and the Australian gum trees around us, we held each other close and sought comfort and rest in the words of the pastor and the words of Scripture.

It was the end of a long road. For months, a disease called “frontal lobe dementia” had been slowly and persistently eroding the networks of cells in his brain. For months we stood by helplessly as the disease ate away at his independence and physical presence, contorting his mind and body into a twisted, empty shell. Now, we were standing together, returning to the ground the body of our brother and friend . . . one who was also a husband and father. Standing among us was Brenda, a widow now; and pressed against her side were Joshua and Geoffrey, ages 18 and 16 at the time. There was a certain sense of relief and peace among us—and a thankfulness that his agonizing battle was now complete—but deep in our souls stirred thoughts and feelings that would not rest, echoes of questions that could not be quieted.

Why Robert? He was a good man and devoted father and husband, serving as a pastor in a Bible teaching/defending Church? Why this way? The disease had robbed him of everything that he valued most . . . his mind, his ability to communicate the gospel, his awareness of those he loved and who loved him. Why Now? Robert was only 43. His ministry, born out of sacrifice and determination, was beginning to grow. And then there were Brenda and the boys . . . boys who would never again hear the counsel and comfort of their earthly father’s voice, nor would they feel the guidance and touch of his caring hand. Why did this happen when they all needed him the most?

We stood at the grave for some time, quietly, with little left to say . . . but the questions would not be silenced among us: Why? Why? Why?

As we wiped the dirt from our hands and said our last goodbyes, the questions hung heavy in the air. Underneath these questions was a deeper question still—a question that has perplexed mankind for ages, but was now amplified by our circumstances and our pain—and it was a question that demanded an answer: Why would a loving God allow, or even cause, such pain, decay, and death?

As the oldest sibling in the family, I felt the full weight of the question. How would I answer? What would I say to Brenda and Joshua and Geoffrey? I’m a Christian, and I believe and love God’s Word. I teach it all over the world. I preach the message of salvation and tell people about the wonderful God of love who created us; but how could I reconcile all of that with what had happened to my brother Rob? What was I to say to my mother, my own wife and children, my brothers and sisters, nieces, nephews, and so on? And what about the non-Christians who looked on and saw our Christian family struggling to cope with this terrible disaster? What were they thinking; what were they asking? What could we tell them in the midst of this tragedy that would cause them to look to the God of the Bible?

As these thoughts swirled without rest, yet another question came up in my mind: What would Robert say about it all? As a devout and gifted teacher of the Word, what would be his answer to these questions? What would he have said about the Bible and the God it portrays, had he been able to understand what had happened to him? Would he be angry? Would he turn his back on the Word of God he so faithfully preached? What would he say to God if he had been able to comprehend the nature of his disease, decline, and death?

Robert’s disease and illness, as you might imagine, have been a struggle for me and our whole family.

Robert’s disease and illness, as you might imagine, have been a struggle for me and our whole family. No, there are no easy answers in one sense, but in my search for how I should respond as a Christian, I believe that light can be shed on this seemingly unfair, contradictory, and irreconcilable situation. After all, if the God of the Bible Rob believed in is real, and if His nature is as revealed in the pages of Scriputure, then there has to be a way of reconciling what seems to be so grossly unjust with a just and holy Creator—otherwise nothing makes sense.

For decades I’ve known and taught that the Word of God makes sense out of confusion when it comes to issues of history, geoglogy, family, anthropology, morality, paleontology, etc. Since my brother’s death, and the deep soul-searching it has caused, I now also know that the truth of the Word can make sense out of the deepest confusion of the heart, offering answers to the most perplexing, painful issues a person can face.

As we now turn to the infallible Word of God, may we, by His mercy and grace, be given the ability to understand the past, live powerfully in the present, and look to the future with hope, knowing that God himself has given us the answers to the questions we so desperately ask.

Previous Chapter Foreword Next Chapter And It Was Good 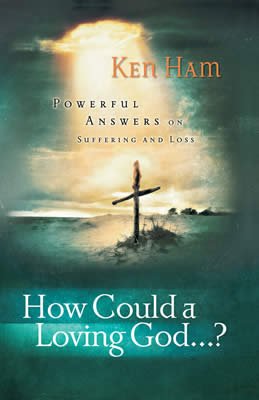