God Glorified in Life and Death of a ‘Handicapped’ Child

Editor’s note: All of us must struggle in varying ways in this sin-cursed universe. Every person has personal and family tragedies unique to our situation. What makes the difference in dealing with these difficulties is when we decide to trust the teachings of the authoritative Word of God and the hope that it can bring, and to also trust that God will send His comforter, the Holy Spirit, during difficult times.

The major emphasis of Answers in Genesis is to uphold the authority of God’s Word and challenge people to build their thinking on this foundation. To help illustrate this, we offer the testimony of AiG supporter, Tom Carpenter of Georgia, USA, who recently lost his 15-year-old son after years of struggling with a devastating health condition. The father wrote a touching commentary for this website, showing what a difference it makes when one believes God’s Word from the beginning when dealing with such a deep family tragedy.

On 2 January 2004 my son, Brian Carpenter, died at the age of fifteen.

Brian was only expected to live to be about three or four years because he was born with a rare brain malformation called lissencephaly. This is defined by smoothness of the brain; that is, his brain did not have the normal dips and folds (“gyri”). Developmentally, he was only at the age of a three-month old; he could not walk, talk, hold his head up or even smile. Mentally he could not understand most of what went on around him.

Medically, he had seizures and several complicated surgeries during his life. He required 24-hour care, and in the last months of his life, his mother (Jeanne) held his 50-pound body—twisted with severe scoliosis—all night, sitting on the couch trying to manipulate a cough from him. Indeed, his breathing and congestion had become the focus of his parents” efforts (in particular his mother) to ensure his survival.

His life and his death taught all those that knew him of God’s wisdom, grace, sovereignty and power. However, as Pastor A.T. Stewart preached Brian’s funeral, he pointed out that from the human perspective, Brian’s life was tragic. His discomfort in daily living, his inability to experience joy or happiness and the burden of his constant care on his parents were devastating and, frankly, unexplainable from the human perspective. 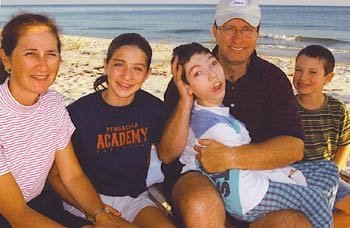 The Carpenter family of Georgia, with Brian in the middle.

On the other hand, the pastor also pointed out that from the divine perspective, Brian’s life and his death were a God-glorifying blessing to his parents … and to everyone who knew him. The only true comfort in dealing with such a human tragedy comes not from sentiment, well-wishes or drugs like Prozac, but from an eternal perspective.

It is only in the revealed Word of God that this genuine divine perspective can be gained.

John MacArthur, who wrote the foreword to AiG’s book on why God allows suffering and death entitled Walking through Shadows: Finding Hope in a World of Pain, has a new book called Safe in the Arms of God which has also been especially helpful to our family as we have sought to see what God’s Word has to say about Brian’s eternal life. In the book, Dr MacArthur writes, “When we look into the grave of a little one, we must not place our hope or trust in a false promise, in an unbiblical theology, in the instability of sentimentalism, or in the cold analysis of logic. Rather, we must look to what God’s word has to say on the matter” (page 13).

True comfort, therefore, does not come from human opinion, but from the Word of God. Even so, some may question, “Can Brian be in heaven?” After all, he was incapable of “calling on the Lord” to be saved. He was even incapable of making a rational, willful, conscious, intentional choice to believe.” Or some may conclude, “He never ‘walked an aisle’ or signed a church membership.”

The answers to these questions, I believe, are clear in the Bible. The first that comes to mind is the oft-quoted: “For by grace are ye saved through faith; and that not of yourselves: it is the gift of God: Not of works, lest any man should boast” (Ephesians 2:8-9). Brian’s life and death provided punctuation to the teaching that we are saved by grace and not works, and that punctuation was an exclamation point! (Incidentally, Brian’s mental condition was similar to all babies who die, including aborted children.)

Brian was a sinner, guilty, like us all, of the stain of original sin inherited from Adam (Romans 5:1-19). That he was morally corrupt was self-evident; if this were not so, why would he die at all? Adam’s sin, which we all inherit, results in death. If this were not so, none of what the Bible says about the cure for that death makes sense. Thus, like us all, he needed salvation from the judgment of that sin. But, like us all, he gained this salvation through the grace of God. Grace is not earned nor deserved but bestowed upon us.

Dr MacArthur explains that children like Brian “have no basis on which to believe or not believe.” In John 3:36 the primary damning work is unbelief: “… he that believeth not the Son shall not see life; but the wrath of God abideth on him”; see also John 8:24. In Brian’s life, there was no unbelief or willful rebellion or willful acts of disobedience. Dr MacArthur continues: “Scripture always connects eternal condemnation with works of unrighteousness—willful sin” (see also 1 Corinthians 6:9–10) and “nowhere in the Bible is anyone ever threatened with hell merely for the guilt of the inherited Adam. Instead, whenever Scripture describes the inhabitants of hell, the stress is on their willful acts of sin.”

The richness of this hope of heaven doesn’t make sense either without an understanding of the foundation laid in Genesis. The curse marred this life and, as the late Pastor Robert Ham [brother of AiG–US President, Ken Ham] put it, “The Apostle Paul saw sickness as normal. N–O–R–M–A–L.” [‘Normal” in an abnormal world—the one we all live in—is what Robert Ham meant. Not that it is God’s normality.] (As quoted by Ken Ham, Walking Through Shadows.)

So much so that “all of creation groans and labors with birth pangs” eagerly waiting for the hope, the confident expectation of a glorified body. Thus, pain, death and suffering are not worthy to be compared to the glory in heaven (Romans 8:18ff). I truly believe that a perfected body awaits Brian to match his perfected spirit in heaven now. The discomfort of this life was not worthy to be compared to the perfect comfort and joy of his life now.

God, our personal Creator, comforts us in Psalm 139, instructing us that every human life from conception is precious and has a purpose, plan and destiny from God. Dr James Dobson of Focus on the Family wrote that Brian “was such a powerful example of the inestimable value and worth of every human life, a truth our culture desperately needs to see played out ‘in the flesh’.” (personal letter from Dr Dobson to Mr and Mrs Carpenter, 6 February 2004).

Pastor Stewart summed up Brian’s life and death quite well: “Brian Carpenter’s life was not a waste; far from it. His life was a God-glorifying life; and if (when) the day comes when we are in a casket and if the preacher who stands over us can truthfully say, ‘His life, her life was a God-glorifying life’ … what else really matters? What can you add to that? ‘For from God, and through God and to God are all things. To God be the glory. Amen’” (Romans 11:36).