Popular Science’s September 2014 issue has jumped into an arena that it is unprepared for, and this particular issue should be renamed Popular Spin magazine. Popular Science has long been known for featuring the newest inventions and the latest electronic gadgets, and for looking at potential breakthroughs in technology.

All of these showcase observational (or operational) science in its truest form. The steps of the scientific method (developed by a creation scientist) are to ask a question; do background research; construct a hypothesis; test your hypothesis by performing experiments; analyze the data and form a conclusion and repeat; and then publish your results. The steps of the engineering design process, which Popular Science usually reports on, are as follows: ask a question; do background research; specify requirements; brainstorm solutions; choose the best solution; do development work; build a prototype; and, finally, test and redesign.

Once again, they have opted to attack Christianity and promote the humanist religion with none other than Bill Nye!

Both of these above methods are typically the hallmark of Popular Science. But, in recent years, they have been diving into more and more religious topics by pushing the religion of secular humanism.1 Once again, they have opted to attack Christianity and promote the humanist religion with none other than Bill Nye! Yes, that’s right, you can firmly expect to see the religion of secular humanism exalted and Christianity denigrated in this issue.

Most of the jabs are at biblical creation in particular, but Christianity as a whole is portrayed as holding back “science,” by which they mean the evolutionary religion. By only quoting one side of the story (Bill Nye’s), by bemoaning polls that show that 45 percent of Americans do not believe humans came about through evolutionary processes, by falsely pitting reason against faith (even though it is reason because of faith), and by insinuating that the questions asked during the Q & A portion of the Bill Nye/Ken Ham debate on February 4, 2014, were designed to trip Bill up, they attempt to paint all of Christianity in a suspicious light. 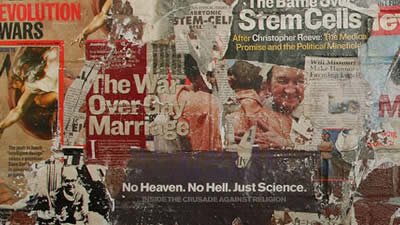 See Countering the Culture for our examination of how, from the book of Genesis, the Bible’s authority speaks with relevance to many of the hot button news and events of our day.

Even when complimenting the design of some of the exhibits in the Creation Museum (which Bill Nye has not officially been through), they have to plant a seed in readers’ minds that the Creation Museum is scary for young children. Describing our Creation Museum personnel as wearing “tight smiles” is also not just untrue, but it is definitely written with the purpose of painting our guest services employees as grim and reserved, when in fact they are helpful, friendly, and conscientious of visitor’s needs. It is simply a subtly biased attack by people whose religion has no ultimate moral foundation.

In a little more than 48 hours he would walk onto a stage in Petersburg, Kentucky, to debate Ken Ham, founder and leader of Answers in Genesis, a ministry most famous for owning and operating the Creation Museum, which displays animatronic dinosaurs next to Adam and Eve. Preparing for the debate—the responsibility he felt defending reason in the face of extreme faith—had weighed heavily on Nye.2

The Ultimate Basis for True Science

In Bill Nye’s materialistic religion, there is no basis for logic and reasoning, and Mr. Nye never could defend that in the debate.

This is the typical false dichotomy that secularists use in claiming reason and faith are mutually exclusive. Reason comes from the biblical worldview and secularists are borrowing it because reason, which is not material, cannot exist in their materialistic worldview. In Bill Nye’s materialistic religion, there is no basis for logic and reasoning, and Mr. Nye never could defend that in the debate. In the debate, Bill Nye discussed the topic of origins and interpretations of evidence concerning past events he did not witness (historical science), as well as technology developed by scientists in the present (observational science).

The problem was that Bill Nye would use the one word science to describe both situations, as he would not acknowledge his own faith beliefs. Bill Nye would claim his statements about billions of years, evolution, and so on were based on reason, whereas Ken Ham’s statements about origins based on the Bible are based on faith. Ken Ham was only too willing to admit his beliefs/faith aspects in regard to the account of origins in Genesis, but Bill Nye refused to admit the obvious religious beliefs he had, such as life being formed by natural processes billions of years ago.

Both Ken Ham and Bill Nye use reason—the difference is that Bill Nye believes we can use autonomous human reasoning (which is not material, ironically, but is borrowed from a biblical worldview and is grounded in the faith of reliable human senses) to determine our worldview concerning origins, whereas Ken Ham uses reason with God’s Word (the Bible) as the foundation, for using this reason to develop his worldview.

Really, Bill Nye must borrow from God and His Word just to make a case against God.

Really, Bill Nye must borrow from God and His Word just to make a case against God. As we will show in subsequent articles, Popular Science is siding with Mr. Nye and his materialistic religion; in doing so, there is no basis for reason, which undercuts the very reason for Popular Science magazine!