“Overwhelming Evidence in All Fields of Science Supports Evolution.”

The irony, of course, is that for centuries prior to Darwin’s publication of On the Origin of Species, the majority of scientists found the opposite to be true: the “evidence” supported creation. What changed? Not the evidence. Rather, the starting point changed (i.e., moving from the Bible, God’s Word, to humanism, man’s word). Creationists continue to see everything in light of God’s Word and all evidence as supporting the biblical account. In reality, there is no “neutral” starting point; everyone—whether they acknowledge it or not—interprets the “facts” according to a particular way of thinking (i.e., worldview).1

Creationists could respond to this argument with their own “overwhelming evidence” in support of creation, such as this impressive list. However, creationists must beware of building their case on the basis of evidence alone. The common assertion, “The evidence speaks for itself,” is a logical fallacy of reification. A fossil dinosaur won’t speak up and tell its age. So unless God allows the rocks to cry out (Luke 19:40), no one can claim that the evidence argued and won the case. It isn’t about the amount of evidence each side can dig up in its favor. Since both sides interpret the evidence according to their opposing worldviews, the debate centers on which side correctly interprets the evidence. 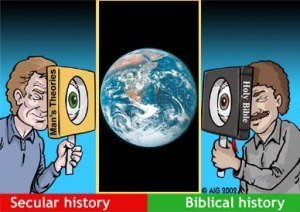 According to Baucham, Secular Humanism (and its component, Naturalistic Materialism) is based on the assumption that matter is all there is, and therefore all knowledge is derived from the study of the universe through reason and the scientific method. Christian Theism, on the other hand, holds that God created the world and everything in it; therefore, our pursuit of knowledge must balance reason and revelation.3

First of all, the secular humanist has no basis to argue his case because reasoning would be meaningless and futile in a naturalistic world without abstract laws, like the laws of logic. Second, absolute moral standards against wrongs like stealing or murder don’t apply in a world of the survival of the fittest. Third, the practice of science presupposes that the universe is orderly and predictable, following the laws of nature, which cannot be explained in a random chance universe made up only of the material.

Therefore, in order to reason, expect absolute moral standards, and practice science, secular humanists must stand on biblical ground. AiG calls this the ultimate proof of creation. The laws of logic, absolute morality, and uniformity of nature stem from the immutable Creator who upholds the universe through orderly physical laws and created man with a conscience and intellectual capacity (i.e., in His image).

People who understand and trust God’s special revelation of the Bible can correctly interpret God’s general revelation of the universe and marvel at how the evidence—from DNA and coral reefs to mountain ranges and the solar system—displays God’s glory (Psalm 19). Furthermore, the Bible shows how to interpret the evidence of death and disaster as results of the Curse and the Flood and as a warning of God’s judgment to come on sinners. But the Bible also gives hope of a new, perfect heaven and earth for sinners who turn to Jesus—the Creator, Redeemer, and Lord:

Knowing this first of all, that scoffers will come in the last days with scoffing, following their own sinful desires. They will say, “Where is the promise of his coming? For ever since the fathers fell asleep, all things are continuing as they were from the beginning of creation.” For they deliberately overlook this fact, that the heavens existed long ago, and the earth was formed out of water and through water by the word of God, and that by means of these the world that then existed was deluged with water and perished. But by the same word the heavens and earth that now exist are stored up for fire, being kept until the day of judgment and destruction of the ungodly.

But do not overlook this one fact, beloved, that with the Lord one day is as a thousand years, and a thousand years as one day. The Lord is not slow to fulfill his promise as some count slowness, but is patient toward you, not wishing that any should perish, but that all should reach repentance. But the day of the Lord will come like a thief, and then the heavens will pass away with a roar, and the heavenly bodies will be burned up and dissolved, and the earth and the works that are done on it will be exposed.

Since all these things are thus to be dissolved, what sort of people ought you to be in lives of holiness and godliness, waiting for and hastening the coming of the day of God, because of which the heavens will be set on fire and dissolved, and the heavenly bodies will melt as they burn!But according to his promise we are waiting for new heavens and a new earth in which righteousness dwells. (2 Peter 3:3–13)

What’s the Best “Proof” of Creation?

Previous Article “Only the Uneducated Reject Evolution.” Next Article “Doubting Evolution Is like Doubting Gravity.”