“Viability” Criterion & Age: Week 25 in the Life of an Unborn Baby

Hair becomes visible, lungs continue to form, and most babies can live outside the womb with significant care in this week of life in an unborn child.

At 25 weeks (27 weeks gestational age), the hair on the baby’s head is visible. His brain is active, developing neurons and forming connections throughout different areas. This includes the network of nerves that connect the ears, which means your baby can likely recognize his mom’s voice. Because he is covered in vermix (a creamy coating that protects the baby’s skin), the sounds are muffled. Many parents read and sing to their preborn baby, encouraging neuronal growth and recognition after the baby is born.

The baby’s lungs continue to develop as she prepares to breathe after birth. Her lung cells are making the surfactant that keeps her lungs’ tiny air sacs (alveoli) moving smoothly and prevents their collapsing. She practices breathing the amniotic fluid that surrounds her so that she’s ready for her first breath outside her mom’s womb. 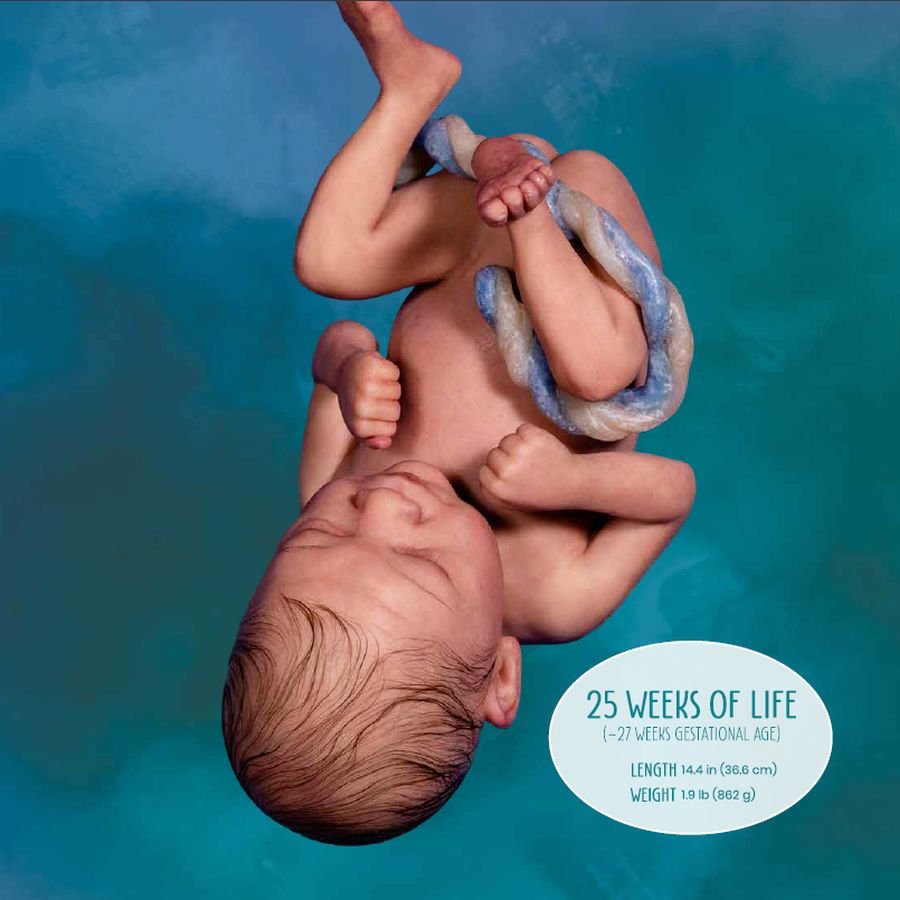 Model from the Creation Museum’s Fearfully and Wonderfully Made exhibit and book.

The baby is more than a foot long (about 14½ inches) and weighs about 2 pounds. He likes to curl up in the “fetal position” and has a sleep and wake schedule. He also hiccups, which his mom may be able to feel and enjoy watching as her baby moves in her belly.

The baby’s taste buds have developed, and he can taste differences in what his mom ate through the amniotic fluid (the baby experiences his mom’s meal about two hours after she eats). Although the baby and mom are two separate individuals, if mom takes good care of her body (in what she eats, the vitamins she takes, and the rest she gets), this helps her baby develop well.

Most babies born at this time can survive with significant levels of care. This causes some to suggest that it’s ok to kill babies in utero before this point since they wouldn’t be able to survive on their own outside the womb.

Most babies born at this time can survive with significant levels of care. This causes some to suggest that it’s ok to kill babies in utero before this point since they wouldn’t be able to survive on their own outside the womb. However, who of us would be able to survive on our own if thrust into an environment unknown to us without any assistance—say, the extreme cold of the Arctic or the extreme heat of the desert? The ability to survive on our own doesn’t determine personhood—a toddler would likely not survive if left alone for days on end. The right to life comes with being an image-bearer of the Creator from the moment of fertilization.

It’s likely that by this stage in the baby’s development, the parents have made an announcement, perhaps something like, “We are going to be parents in September!” Yet, that’s not an accurate statement, is it? From the moment the dad’s sperm fertilized the mom’s egg, the man and woman were parents. Their parents were grandparents, their sisters were aunts, and their brothers were uncles. Although we celebrate the day of birth of our children, the reality is that they are about nine months older than that.

A missionary friend once told me, “In China they begin counting from conception, so what we would call their first birthday, they call the second.

A missionary friend once told me, “In China they begin counting from conception, so what we would call their first birthday, they call the second. I used to drive my girls nuts doing that with them—they didn’t want to be one year older.” Another missionary friend in Haiti said that Haitians also consider a child a year old at their birth. In fact, when we celebrate the birthdays of our boys, we like to say that they are “X years old post-womb.” My oldest son celebrated 13 years post-womb at the beginning of November, but he spent many months previous telling everyone that he was “technically already 13”—and he was right!

Of course, that means that a woman who is pregnant for the first time on Mother’s Day should whole-heartedly celebrate! She is already a mother, even if, tragically, the baby is lost before birth. And similarly, this would hold true for the father.

Just the other day on social media, two of my very pro-life friends separately posted that they “had become grandparents yesterday!” Those of us who embrace a life-affirming worldview need to ensure that our words match our beliefs so that we aren’t unwittingly denying the humanity of the preborn. For more information on how to think and speak rightly about pregnancy, miscarriage, and birth, please see the following resources: