Weaved Together in the Womb?

Is the NIV version of the Bible wrong to say that we are “knit” together in the womb? Dr. Terry Mortenson and Dr. David Menton, AiG–U.S., examine the Hebrew and science. 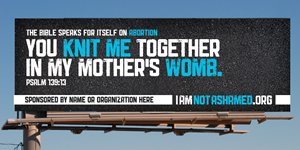 Discover more about these AiG billboards, which are going up around the country.

Answers in Genesis received a letter from an individual who took exception to an article that appeared in our printed monthly newsletter, Answers Update. While we typically use the King James Version of the Bible in most of our biblical citations (e.g., it’s what we use in our Creation Museum—updating some archaic words1), this man claimed that we were wrong to cite the New International Version when commenting on a portion of Psalm 139:13, which in the NIV is translated as: “You knit me together in my mother’s womb.” This verse, by the way, is also being used as a part of our “I am Not Ashamed” national outreach, including in an ad campaign in the USA Today newspaper and on billboards—see the set of different boards (and consider sponsoring one).

Here is what the person wrote:

I love your theme for the year ‘I am not Ashamed.’ I have delighted in your stand on the authority of God’s Word. However, I am disappointed that for your stand on abortion, you are using Psalm 139:13 that the NIV translates “You knit me together in my mother’s womb.”

In the King James translation the word ‘cakak’ (Strong’s [Concordance] 5526) is translated “covered me” rather than “knit me together.” . . . Looking at the definition for ‘cakak’ it does contain ‘weave’ in some dictionaries. However, this is used to describe the type of covering, not the action being performed on the object . . . when read in context and examining the other passages containing cakak, I do not see how one can honestly come up with “knit me together.”

Here is our response from staff members Dr. Terry Mortenson (a theologian and historian) and Dr. David Menton (an anatomist) on this claim:

While the King James Version does translate the Hebrew word סָכַךְ in Psalm 139:13 as “covered,” it is translated as “knitted” or “woven” in most other translations, such as the NASB, NIV, and ESV.

These modern translations are perfectly consistent with the context, for in Psalm 139:15 David says he was “curiously wrought” (KJV). Other versions translate the word here as “skillfully wrought” (NKJV and NASB) or “woven together” (NIV) or “intricately woven” (ESV). “Knitted” or “woven” is also very consistent with David’s statement in Psalm 139:14 that he was “fearfully and wonderfully made” in a “marvelous” way. On the other hand, it is difficult to see how KJV’s “covered” in 139:13 fits with the description of verse 14.

In their Commentary on the Old Testament, the highly regarded 19th century Hebrew scholars Keil and Delitzsch interpret סָכַךְ as “knitted” when they remark:

Ps. 139:13–18. The fact that man is manifest to God even to the very bottom of his nature, and in every place, is now confirmed from the origin of man. The development of the child in the womb was looked upon by the Israelitish Chokma as one of the mysteries, Eccles. 11:5; and here the poet praises this coming into being as a marvellous work of the omniscient and omnipresent omnipotence of God. קָנָה here signifies condere; and סָכַך not: to cover, protect, as in 140:8, Job 40:22, prop. to cover with network, to hedge in, but: to plait, interweave, viz., with bones, sinews, and veins, like שׂכֵךְ in Job 10:11.

The widely used Hebrew-English lexicon by Brown, Driver, and Briggs also gives “weave together” as the meaning of the Hebrew word in Psalm 139:13.2

Such an understanding of the human body is perfectly consistent with what we now know from modern medical research. Our bodies literally are knit together in a marvelous way. With the development of the microscope in the later half of the 17th century, it became evident that the cellular and extracellular components of organs and tissues of man (and animals) are often woven in complex ways.

The name given to the microscopic study of biological systems is histology, which is derived from an ancient Greek word histos (ἱστός), meaning “web” or “tissue.” An obvious example of this woven or web-like organization can be seen in the dermis of the skin of man and animals. Here, connective tissue fibers made of the protein collagen are woven in a highly complex manner that imparts a warp and weft similar to a cloth fabric. The strength and flexibility of leather (typically made from cow dermis) reflects its underlying woven architecture.

The King James Version is a wonderful translation (it is used exclusively in the Creation Museum1). But it is not a perfect translation, as even the original KJV translators themselves acknowledged in their “Translators Preface” to the original 1611 edition and verified by multiple revisions and corrections in subsequent years.3

More recent scholarship has often helped us in our understanding of some words or phrases of the original inerrant Hebrew and Greek texts of the books of the Bible. No doctrine of Scripture is at stake here, and no modern translation is perfect either. So, it is helpful to consult various translations as we seek to understand God’s Word correctly. By so doing we can see where godly scholars disagree on the best way to translate, and we can guard against being dogmatic where we shouldn’t be. And we should always study a passage in context and compare Scripture with Scripture, thereby letting it be the final authority regarding its correct interpretation.

Previous Article Ashamed of “I Am Not Ashamed”? Next Article The Moon’s Regression and Density Waves