March 8 is International Women’s Day. Women have made many biblical strides over the past hundred years as they’ve gained recognition for what God always intended: equality as humans. Culture does a poor job of defining equality because it doesn’t follow the biblical role model for being equal in worth but different in marriage and church roles (Genesis 1:27; Galatians 3:28; 1 Corinthians 11:11; Ephesians 5:22–33).

Because culture doesn’t know how to define equality, it often twists truth and morality to fit its own agendas. The most prominent example of this is the battle for unborn life. Culture argues that women have a right to their own bodies. Consider the Democratic Senator of California Kamala Harris’s tweet after President Donald Trump’s State of the Union address on February 5, 2019: 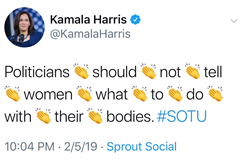 She’s right: a politician shouldn’t tell a woman what to do with her body. But politicians, activists, and many others like Sen. Harris blur the truth about women’s rights. A woman’s body is sacred—as is a man’s, a child’s, and, yes, an unborn baby’s body. Society loudly calls for female equality in the form of physical autonomy, all the time denying that same autonomy to the unborn child within her. As a result of the lies, both hidden and blatant, many women are left with physical, emotional, and spiritual scars.

AiG holds firmly that all life is sacred in the eyes of God, including that of unborn babies.

AiG holds firmly that all life is sacred in the eyes of God, including that of unborn babies. Therefore, we also value the soul of every woman who has experienced or is considering aborting her unborn child. Though these women are, often unknowingly, sinning against God and their unborn child in the act of abortion, these women often suffer severe emotional and physical trauma—even if they never go through with the abortion.

According to Hope After Abortion, “Women who have had an abortion have an 81% higher risk of subsequent mental health problems compared to women who have not had an abortion.”1 And according to The American Pregnancy Association, “Emotional and psychological effects following abortion are more common than physical side effects and can range from mild regret to more serious complications such as depression.”2 These confused and hurting women need followers of Christ to come alongside them and show them the truth of both the sin that separates us all from the holiness of God and the solution of God’s redemptive love through the death and resurrection of Jesus Christ.

On this International Women’s Day, consider ways both to prevent abortion and to reach hurting women post-abortion with the truth of God’s love.

On this International Women’s Day, consider ways both to prevent abortion and to reach hurting women post-abortion with the truth of God’s love. Here is a list of ideas to get you started: