When the West rejected the Creator, it tossed out the one sure foundation for human dignity and purity. Without the light of God’s Word, the floodgates have opened to a new form of slavery in the West—trafficking in human lives to fulfill carnal lusts.

Note: Although we tried to cover this topic sensitively (the Bible speaks even more bluntly about such evils), this article may not be suitable for young children.

It was the middle of the night, and I was sitting in the back seat of a dark SUV moving along the taxi lane in downtown Mexico City, Mexico. A car with guards went in front of us and another followed us. In addition, a long line of cars drove very slowly ahead and behind our vehicles to give the men time to choose a girl from the dozens of young girls lining the streets. That was the first time that I saw “up close and personal” the human face of the evil that we call “sex trafficking.”

My heart broke that night as I saw the tragic faces of very young teenagers who were offering themselves as sex slaves for a few minutes or a few hours. One of our guards was so stunned that he cried out over the walkie-talkies in a choked voice, “Those girls are as young as my daughter.” Things got very quiet after that; nobody had anything to say.

What we witnessed that night is part of the industry that former President Bush called “modern-day slavery.” It is rampant and growing.

Most people are stunned into silence when confronted with such terrible evil, especially when they learn that the victims are often young children or naive tweens. But after the initial shock, decent and compassionate people become outraged. 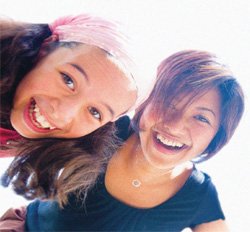 What Can You Do?

The United States is leading a worldwide effort to end human trafficking through unified efforts focusing on prevention, such as increased awareness of the problem; active prosecution of those who engage in exploitation; and more protection for those who are vulnerable.

Christian groups like Concerned Women for America (CWA) are at the forefront in abolishing human trafficking and protecting children and women. Some groups, like CWA, draft and lobby for legislation that will help prosecute this horrible crime and train leaders in other countries to do the same. Other groups, like the Salvation Army and World Vision, rescue victims and provide rehabilitation facilities for their healing.

For more information about the subject and what you can do, a good place to start is these websites (search for “human trafficking” at each site):

The criminals and traffickers hold little girls hostage. They lurk in the night shadows, ready to stop any girl who attempts to escape or to divert unwanted eyes from seeing these criminal transactions, which one researcher described as “hidden in plain sight.”

But sadly, many people are unaware this evil happens throughout the United States, England, and other so-called “rich” nations; they think it is a problem only in countries like Cambodia, India, or Thailand. But the wealthy nations’ willingness to pay for various sexual perversions helps drive illicit activity beyond their borders. It has also brought this evil to their own shores.

Fortunately, the United States has launched successful campaigns to warn men against exploiting children in other countries. For instance, World Vision’s Child Sex Tourism Prevention Project, funded by the U.S. State Department, put up billboards in several countries that pictured young children with the warnings, “I am not a tourist attraction” or “Abuse a child in this country . . . go to jail in yours.” The campaign also ran in-flight videos against sex tourism on some airlines.

Although it may seem unbelievable, half of those drawn into prostitution in the United States entered at age 12, and nearly 70 percent entered before they were age 16. Tragically, a Canadian study revealed, after extensive interviews with 21 prostituted women, that 17 had been abused as children. Abuse continues when they are prostituted; one study revealed that 80 percent of women in prostitution are assaulted, including death threats.

The sex trade is a $20 billion annual global industry. It is big business, and the commercial commodities being marketed are children, young girls, and women. Sadly, the age of maximum desirability is getting younger and younger, so the vulnerable girls are often pre-teens.

In addition to direct sex trafficking, pornography is a $4 billion industry worldwide. There are estimates that people spend over $3,000 per second on so-called “adult” entertainment, and a new “adult” video is produced every 39 minutes. That much money creates a huge demand for women in these obscene films. Sometimes supposed “modeling agencies” will take objectionable pictures of girls and then blackmail them to enter prostitution.

Such repulsive slavery is a consequence of our fallen world, a vile distortion of God’s plan for human relationships. God made life in the Garden of Eden a paradise, but man sinned and that sin infects our culture today. God created a man and a woman to be companions, married to one another in a faithful, lifelong relationship (Matthew 19:3–5; Ephesians 5:22–33), but sex trafficking is the furthest thing from that ideal.

Slavery of any sort is a consequence of our fallen world. Human trafficking is the furthest thing from the ideal God created.

Everything about the prostitution and pornography industries is offensive because they violate the sanctity of human beings, created in God’s image. But mankind has despised this clear revelation of Scripture, leading to our current evil state. When society embraces the idea that humans are merely evolved animals with no Creator, the strong heedlessly prey upon the weak. But when they realize that everyone is uniquely created and loved by God, each life gains infinite value beyond mere self-gratification and survival of the fittest.

Our Christian worldview clearly teaches that no one is a commodity to be used by others (1 Timothy 1:10; see Philippians 2:3). Any other argument, based on shifting human opinion, lacks the sure moral compass that comes from the authority of God’s Word.

In the past, Christianity has been the greatest force in history in elevating women to levels of respect and dignity, and Christians have been at the forefront in battling sin and evil. The Creator calls upon Christians, now as much as ever, to shine the light of truth into the dark corners of the world, exposing the evil that is sex trafficking.

Today, Christian groups and churches have begun opening shelters where rescued victims can receive the Bible-based help that they need to overcome the overwhelming snare of sex and drugs and to become contributing members of society. Most important, Christians are offering broken girls and women the transforming power of Jesus Christ so that they can become whole again, walking with their Maker and Savior.