On Sanctity of Life Sunday, the 60+ million unborn babies are not the only victims of abortion: there is regret for an irreversible action . . . but also eternal hope in Christ.

The saying is trustworthy and deserving of full acceptance, that Christ Jesus came into the world to save sinners, of whom I am the foremost. (1 Timothy 1:15)

In the wake of the anniversary of the Roe v. Wade decision that legalized abortion in the United States, we should remember that the 60+ million unborn babies that have perished are not the only victims. Many women suffer from unexpected guilt for the life-ending decisions they can never undo. Others say they feel nothing—and they may not, at least at present—yet the action they have chosen will affect them. Perhaps it will harden them to the sanctity of human life, or perhaps it will return to haunt them later, but they will likely at some point either face or somehow try to evade the reality that the life they destroyed was their baby’s. 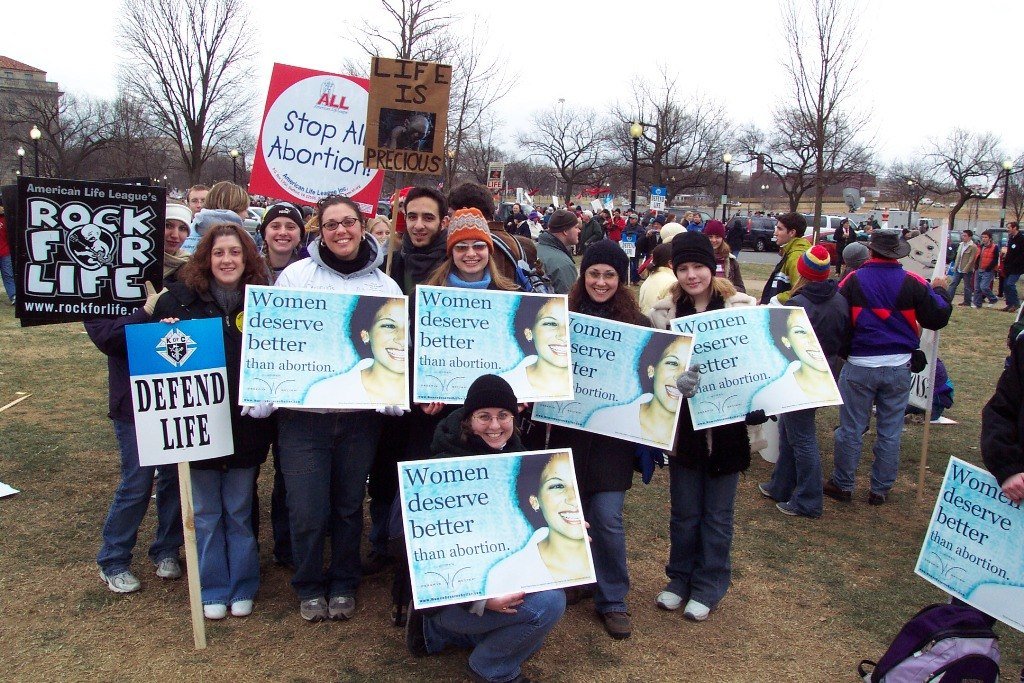 Like these protesters’ signs announce, those who encourage those with unexpected pregnancies to “Choose Life” love both the women and their unborn babies. Pregnancy centers across the country typically offer free services, counseling, information, and support to teens and women who are concerned about an unintended pregnancy, ensuring their clients truly do have a choice rather than feeling pressured by circumstances. Photo credit: Msci, via Wikimedia Commons.

When a woman enters a pro-life crisis pregnancy center—and these actually outnumber the number of free-standing abortion clinics across the country—she is greeted by a response she does not expect—love.1 Love not just for her unborn baby but also for her. Counselors and medical professionals concerned for the life of the unborn are equally concerned about the well-being of the mothers who are suffering.

“When women are given a place where they are heard at a difficult time in their lives—and they can slow down the decision—they are more likely to make a life-giving decision,” said Maureen Yockey, director of Calvary Chapel’s non-denominational Alternative Pregnancy Centers in Colorado. Despite Planned Parenthood propaganda to the contrary, crisis pregnancy centers are not high-pressure dens of scare tactics.2 Of those who come through their doors, Yockey says, “Most women do not want an abortion, but feel they have no choice due to their circumstances. Pregnancy centers exist to make sure women truly have a choice. By providing information, support, and free services, pregnancy centers have allowed hundreds of thousands of women to escape the pains of abortion.”3

As many people hear messages in their churches rightly exhorting us to remember the sanctity of human life on Sanctity of Life Sunday, we need to remember that among the listeners and the family and friends of the listeners were some of those 60 million would-be mothers. For those facing or recalling the convicting truth of the decision they made, we must share the vital truth that Jesus Christ died for the sins of all people (Hebrews 2:9). His blood was shed in order to offer forgiveness to any willing to come to him in repentance and faith. Those to whom God’s forgiveness is offered include women who have had abortions and medical professionals who performed them.

The Bible includes many examples of people who received God’s forgiveness. Prominent among these is the Apostle Paul. Paul, prior to his conversion, thought that he was serving God by persecuting Christians and having them legally murdered. Later, he wrote, “The saying is trustworthy and deserving of full acceptance, that Christ Jesus came into the world to save sinners, of whom I am the foremost” (1 Timothy 1:15). And in the very next verse (1 Timothy 1:16) he pointed out that Jesus Christ had forgiven him and could forgive anyone. Jesus Himself said, “I have not come to call the righteous but sinners to repentance” (Luke 5:32).

We should all regard our own sins, whatever they are, as dark and filthy before a holy God. And we should also remember that we don’t remove the guilt of those sins by rationalizing them—whatever the circumstances, fears, and pressures contributed to them. But the guilt of those sins—including the sin of killing a baby—will be forgiven by God if we freely admit to God our guilt and accept the forgiveness offered to us through Jesus Christ.

Women suffering from post-abortion guilt can find counseling, comfort, and support at crisis pregnancy centers. Most have support groups and counseling freely available. If you are suffering, there are more than 2,000 of these centers scattered across the country ready to help you. They are there to help.