The new History Channel miniseries The Bible packs a lot of biblical history into the opening few minutes, shot aboard Noah’s Ark. As Noah teaches his family about earth’s history, he includes Creation Week, Adam’s Fall, Cain’s murder of Abel, and the Flood’s necessity as God’s judgment on sin. 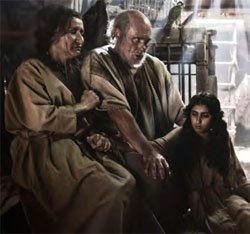 Aboard the Ark, Noah teaches his family about creation and man’s sin from the very beginning of time.

That is an insightful way to open the ten-hour miniseries, which runs from Genesis to Revelation. We would expect to find Noah, “a just man, perfect in his generations” (Genesis 6:9), teaching his family all about the Creator and His works. Noah almost certainly learned biblical history from his grandfather, Methuselah, who easily could have heard it directly from Adam.

As Noah recounts God’s work in creation, The Bible shows images of land appearing instantaneously, and then Adam being created directly from the dust. There is no hint of long ages or of pre-human ancestors. Later, the Flood waters “engulf the world,” not merely the region where Noah and his family lived.

Producer Mark Burnett said that he feels obligated “to tell the stories as written.” Even so, viewers should beware of flawed dramatic choices, which highlight human initiative rather than God’s holiness and grace (a leaky Ark, no holy ground at the burning bush, no pillar of fire holding back the Egyptians at the Red Sea). Despite its shortcomings, The Bible still provides a springboard for fruitful discussion as you contrast each scene with the flawless, life-changing words of the Bible.