This debate between “young earth” and “old earth” creationist positions was aired on the Christian TV program The John Ankerberg Show in eight segments from January to March.

“Fair and balanced” is the slogan for a well-known TV news network in the U.S., but they are words that do not apply to the televised “great debate” on the John Ankerberg TV program that was aired internationally earlier this year. This debate between “young earth” and “old earth” creationist positions was aired on the Christian TV program The John Ankerberg Show in eight segments from January to March. Given the history of Dr. Ankerberg’s antagonism towards the young-earth creation view, I was surprised to learn late last year that such an extensive discussion was to be broadcast on the Ankerberg program on this subject. 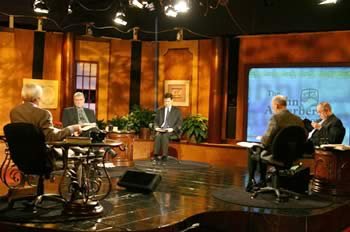 The participants were Ken Ham, president of Answers in Genesis, and astrophysicist Dr. Jason Lisle (also with AiG), representing the young-earth position (an earth a little older than 6,000 years).

As I watched the first three programs, however, my first impression was that the AiG team was not, in fact, receiving “fair and balanced” treatment by the moderator (Dr. Ankerberg).

As background, I should let you know that from the ages of about 15 through 40, I accepted not only the old-earth view, but evolution as well. Nearly 17 years ago, however, I read The Early Earth by Dr. John C. Whitcomb. Eventually I was to add over 120 creation books to my library, all of which convinced me of the validity of the young-earth position. (The most important of these, of course, is the Bible, which I had neglected to consult during my “old earth” years!) Realizing my own bias, I decided to take some objective measures as I watched the “great debate” in order to test whether my impression of bias was correct.

I started by simply noting the time each presenter spoke. Note that this would not be necessary in a typical formal debate setting, where debates usually afford each side an equal amount of time for opening position statements, a lesser but equal time for rebuttal statements, equal time for summary or conclusion statements, and sometimes equal time for response to audience or moderator questions. This TV debate, however, was more of an informal round table discussion, with timing dependent primarily upon the moderator.

Actual debate time was less than 20 minutes in most programs (the longest was at just over 23 minutes)—the remainder of the half-hour programs was devoted to promotion of this debate series, as well as other Ankerberg ministry resources. After the first segment, I also found it necessary to note times for Dr. Ankerberg on those occasions where he was clearly speaking as an advocate for the old-earth position rather than functioning as a moderator.

For the eight programs, the total time allotted for the old-earth position was one hour, 36 minutes, 18 seconds. (Just over nine minutes were attributed to Dr. Ankerberg when he spoke or posed questions that revealed his beliefs about the question being debated.) The young-earth position, though, was allotted 55 minutes, 42 seconds. Put another way, the old-earth view had 1.7 times as much airtime as young-earth (or 63.4% of the total; therefore, young-earth was given 36.6% of the time). If Dr. Ankerberg intended this to be a fair and balanced series, then these figures say otherwise.1

The TV debate was promoted as one that would be done with respect and Christian love. While there was no shouting, I wanted to attempt another reasonably objective measurement that could shed further light on the “fair and balanced” concept as it related to this series: I made a note of interruptions. In other words, when a speaker was interrupted by another panel member. (Interruptions were not counted if the speaker appeared to have finished a thought, or if two speakers were having a back-and-forth dialog; interruptions were only noted when the speaker was in the middle of a point, or obviously not finished.) The moderator John Ankerberg interrupted Hugh Ross once, Jason Lisle 14 times, and Ken Ham 51 times.2

The interruptions by Dr. Ankerberg were often rapid-fire, after only a few words by young-earthers Ham or Lisle, and almost in the style of a prosecuting attorney. Dr. Ankerberg often interrupted to offer immediate rebuttal (sometimes through questions that more than anything revealed his bias) to one of the young-earth speakers. With one exception, he did not cut short the thoughts of Kaiser or Ross. Often, Ham was cut off when making statements that I would submit were particularly persuasive or important. He (Ham) was silenced even when starting out with the simple, “We’re missing a very important point here ….” On two occasions, Dr. Ankerberg even presumed to speak for the viewing audience, and what “they” find troubling about the AiG position. 3

There could be much more said in response to the trio’s severe twisting of both God’s Word and the nature of the scientific evidence about the earth’s age, but that is not the purpose of this commentary. The new DVD set of the debate—with a fascinating running commentary by Dr. Terry Mortenson of AiG—can do that.

Simply put, in light of the above objective observations, I have to conclude that this debate series was nothing close to being “fair and balanced.” The viewing audience definitely deserved a more equitable treatment of this important subject.4