What the Aliens Taught Us in Arrival

[Spoiler Alert: This movie review reveals the plot of Arrival.]

Perhaps the most surprising thing about the newest alien movie Arrival is that it’s not really an alien movie at all. There are no vicious, otherworldly creatures shown in scenes that later play in your nightmares. In fact, there is almost no violence, gore, or even thrill-factor imagery. If you’re a huge sci-fi fan in general, that information may disappoint you. Instead, it’s a movie about humanity, with the aliens as a background vehicle for a message about communication and the most powerful of weapons: words.

When 12 extraterrestrial “ships” arrive at various locations on earth, the US military recruits Dr. Louise Banks, a linguist and language professor, to communicate with the aliens. Helping her in this task is Ian Donnelly, a theoretical physicist. Disinclined to learn the aliens’ language, the military wants to determine one thing and quick: What is the aliens’ purpose on earth?

Ian and Louise enter the ship and meet the aliens who are separated from them by a translucent barrier. (In case you were wondering, the aliens are two enormous creatures, resembling giant squid with seven tentacle-like arms—thus their subsequent name, heptapods.) When Louise initiates conversation, one of the heptapods emits a black smoke-like substance that forms a circular symbol, called a logogram, on the barrier.

Through a painstaking process, Ian and Louise begin studying these logograms, which can stand for a word or an entire sentence, making the translation tedious work. In the process of learning the language and growing familiar with these otherworldly creatures, Louise begins to dream in their language and starts having visions of a future daughter.

The uncertainty of the heptapods’ purpose on earth incites panic around the world. Though initially the countries in contact with these 12 ships shared their discovered intelligence, the Chinese eventually cut communications with the world. And when the aliens issue a message that translates as “Use weapons,” tensions mount among the world powers. In a phrase encapsulating the underlying message of the entire movie, Louise exclaims, “We should be talking to each other!” 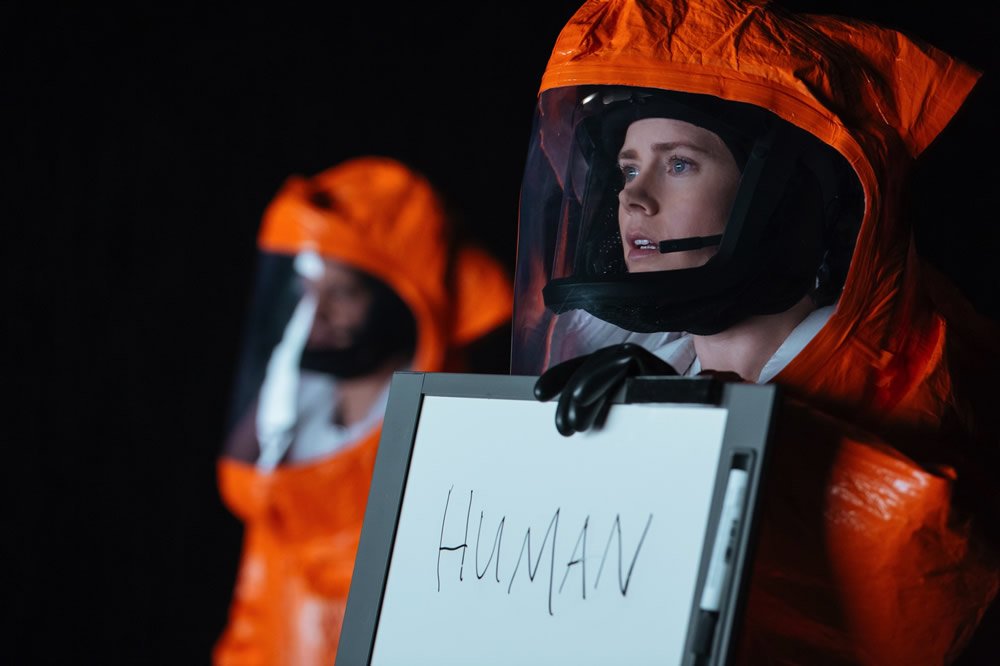 Understanding the complexity of languages, Louise realizes that the heptapods might mean “tool” just as well as “weapon.” She refuses to believe that they are threatening the world or intent on pitting humanity against itself.

The heptapods then reveal that they have given their language itself as a gift—a tool (translated by the hostile countries as weapon) to the humans because thousands of years in the future the heptapod kind will need earth’s help.

Louise also realizes that their language has allowed her to see the future, which explains the dreams about her future daughter, Hannah, whom she and Ian will have together. (This employs—to an exaggerated, sci-fi degree—a theory known as linguistic relativity or Sapir–Whorf hypothesis, which posits that language affects the speaker’s worldview and that language, in a sense, determines thought.) Since the heptapod language structure is nonlinear, it allows Louise to forego the limits that her own linear language has placed on her thoughts so that she may freely experience the “memories” of future events.

When Louise communicates the potential of this language and the aliens’ true purpose on earth, the militaries of the world stand down. Not long after, the ships rise from earth and leave as quickly as they arrived.

It’s worth noting that although Arrival is one of the cleanest movies in theaters right now, the moviegoer should exercise discretion, seeing that this PG-13 film has some objectionable language (Christ’s name taken in vain and a brief instance of vulgarity).

While this is a fictional story and we realize that extraterrestrial life most likely doesn’t exist, Arrival offers us several surprisingly biblical takeaways.

1. “Language is the cornerstone of civilization.”

Louise expresses this truth in her constant battle with the military leaders over how much of the English language the heptapods actually need to learn in order to understand the purpose of their visit to earth. But the heptapods’ language is much different from English and every other known language on earth. Their sentences are written as logograms, circular inkblots similar to Rorschach splotches, suggesting that their sentences have no beginning or ending but exist in one continuum without being bound to any order. Each of the 12 sets of heptapods seeks to give their language to the humans in their region of the planet, their “gift” to humans to be used in the future.

Without language, we are nothing.

Takeaway: How easily we forget the importance of language and words. In the beginning, God used words to speak the universe into existence, and it is His Word that God values above Himself. Language was one of the first gifts God gave to man in Creation Week, a gift that sets humans apart from animals (Genesis 1:26–30). As Louise says, “[Language] is the glue that holds a people together, and it is the first weapon drawn in a conflict. Without language, we are nothing.” (The people of Babel could certainly attest to this after God confused their language, once again proving that He is the Creator of language [Genesis 11:7].) In John 1:1 we read, “In the beginning was the Word, and the Word was with God, and the Word was God.” God gave us language so that we can know His Word.

2. “You can understand communication and still end up single.”

Louise responds with this line after Ian heralds her vast knowledge of communication. But it’s possible to speak the same language while simultaneously failing to communicate.

When the 12 pods land on earth, the governments of each region investigate each ship to determine why these alien visitors have arrived. Most of the world fears that the aliens may threaten war or global destruction. With this fear constantly in mind, humans attempt to communicate with the heptapods and teach them words like weapon and war in an effort to learn the aliens’ intent. Because of their poor communication, the world nearly does come to war when the heptapods use the word weapon to try to convey why they’ve come—to bestow the gift of their language, which they mistakenly refer to as a “weapon.” “We need to make sure that they understand the difference between a weapon and a tool,” Louise explains. “Language is messy, and sometimes one can be both.”

Takeaway: Our words can be weapons of destruction or tools of construction. Proverbs 18:21 tells us, “Death and life are in the power of the tongue, and those who love it will eat its fruit.” We must be always mindful of our words, thinking before we speak and praying always for wisdom—because “a word fitly spoken is like apples of gold in settings of silver” (Proverbs 25:11). 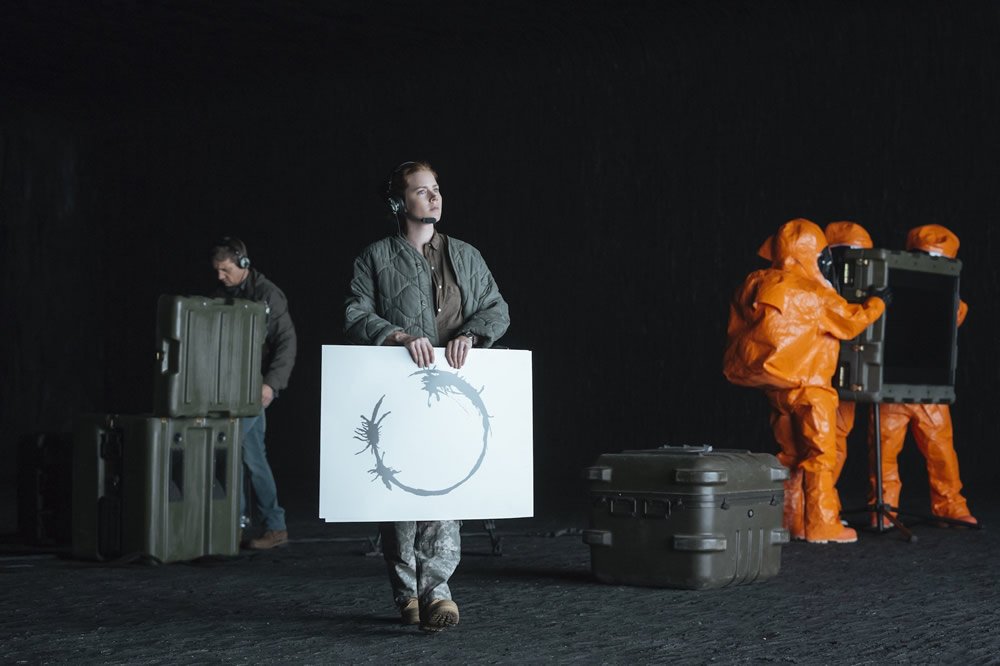 3. “This is just a way to get us to work together for once.”

There is an overarching theme of world unity in Arrival, magnified by the isolationist behavior of several countries throughout the movie. But Louise learns that each of the 12 ships is giving the world elements of the heptapods’ language so that the world must work together to understand it. Louise believes, as do many modern linguists and philosophers of language, that the language you speak shapes the way you think. By working together to understand this strange new language, humans will also start thinking alike, thus unifying the world.

Takeaway: The world presumes that global unity will bring the elusive peace for which they constantly search. Contrarily, this idea of global unity (through a one-world government) brings a measure of concern—even terror—to those who think through the implications of an entire sin-cursed world being ruled under one godless human or group of humans (see Genesis 11:1–9). The peaceful, global unity the world seeks will not be fully realized until Christ’s return when He will reign as a benevolent and just ruler.

Christ’s followers should seek peace and unity as “fellow workers for the truth.”

However, on a personal level, we should certainly strive for peace and unity among ourselves until that day. Psalm 133:1 says, “Behold, how good and how pleasant it is for brethren to dwell together in unity!” Given the polarity and division so prevalent in our world (politically, socially, economically, and so on), Christ’s followers should seek peace and unity as “fellow workers for the truth” (3 John 8), learning how best to tell the unsaved world of the peace that comes only through receiving the gospel and following Christ’s commands to love God and one another. We should strive to bring glory to our Father as the unified body of Christ (Romans 15:5–6; Philippians 1:27).

4. “Despite knowing the journey and where it leads, I embrace it, and I welcome every moment of it.”

In this sci-fi story, the heptapods’ language changes Louise’s worldview and her ability to perceive the details of her life. Through a flash-forward to the future, Louise learns that she will one day have a daughter who will eventually die of a rare, unnamed disease. Still Louise embraces the joy that will come from her daughter’s existence and chooses to give her life.

Takeaway: This may well be one of the most dominant prolife messages to come from Hollywood in quite a while. Today’s ultrasounds and advanced technology allow parents to peer into the supposed future to see their life with a disabled child. But too often, rather than choosing to embrace the life—no matter how much sorrow may come with it—they choose abortion. However, just as Louise’s worldview is transformed by the heptapods’ language, God’s Word should transform our minds (Romans 12:2), allowing us to trust the one who truly knows the future. We can welcome whatever may come with just as much joy, knowing that God has only our good in mind (Psalm 100:5, 139: 17; Romans 8:28).

Words matter, and Arrival uses the complex platform of aliens to reveal the perilousness, power, and potential of language. In the end, it’s a word that nearly starts a global war, and it’s words that save the world from catastrophe. May we always be mindful of the sounds, syllables, and sentences waiting to roll carelessly off our tongues, that we may wield them as tools for righteousness and truth.