Get one year of faith and family movie streaming, plus all of our Answers in Genesis videos! 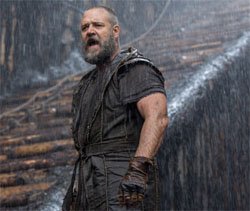 Actor Russell Crowe was hoping that his new film Noah would be a blockbuster biblical epic.

Don’t let the movie trailers fool you. Appearances to the contrary, Noah’s cleverly edited promos do not reflect the film’s wholesale departure from the Genesis account of the Ark. Early previews tell of a deranged Noah, a witch-doctor-like Methuselah, and bizarre extrabiblical elements, such as rock-like creatures (apparently fallen angels) who help Noah build the Ark.

Despite negative feedback from several Christians who viewed a rough cut, director Darren Aronofsky remained adamant about not altering it. Unsuspecting moviegoers may be plopping down several bucks to watch the film because trailers suggest it is faithful to Genesis. But beyond the bizarre additions, the reviews reveal a rough cut that contradicts several key historical truths taught in Genesis 6–9.

The details are posted at answersingenesis.org/shipwreck/.

In the Hollywood Hopper

Hollywood is increasingly looking to the Bible for inspiration to churn out money-making films: