Once Lost, But Now Found

It was the greatest evil in the world during its time: the British slave trade of the late 1700s and early 1800s. 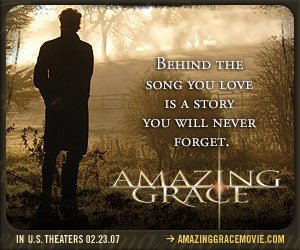 Today, the heroic and devout Christian who was most responsible for ridding much of the world of such a monstrous, deadly practice has become a largely forgotten figure. But that may soon change.

Before reflecting on the great abolitionist William Wilberforce and his life story that is being portrayed in the new film Amazing Grace,1 I must confess to a bias. A movie critic typically doesn’t do that, of course, but let me disclose at the outset that I am an unabashed fan of this great Christian statesman. Wilberforce was a remarkably gifted man. He was recognized as the finest orator of his day (when that was something highly prized), also possessing a first-class mind; and because he had many influential friends, Wilberforce was on the fast track to becoming prime minister of Britain. But his life took a detour in his 20s: his new-found faith in Christ turned him away from his selfishly set goals. After becoming a Christian and as a member of Parliament, Wilberforce, a tireless and relentless man, devoted himself to using his position and extraordinary gifts to humanitarian causes, as the Bible’s teachings motivated him.2

My bias may have a positive aspect as I write about Amazing Grace, the film. Knowing this historic character rather well, I am in a position to point out possible flaws in the film’s storyline. So I feel compelled (and, yes, this may be nit-picking to some) that I should point out that the well-intentioned producers got a couple of things somewhat wrong: the stooped over, plain-looking Wilberforce is portrayed on film by the rather dashing actor, Ioan Gruffudd; second, the famous hymn writer of “Amazing Grace,” John Newton, who was a compatriot of Wilberforce in the abolition battle, was not a slave-ship captain for twenty years as the movie declared—it was perhaps only two years. Otherwise, the film seemed to be accurate, and it did a particularly good job of recreating the England of 200 years ago. 3 This is a first-class production with some fine actors; in fact, Albert Finney, who portrayed Newton, is already being touted by some reviewers for a 2008 Oscar for “Best supporting actor.”

The movie’s producers were not only trying to portray a great Christian leader (we are aware that many involved in the production are Christians, including its executive director, Ken Wales, whose dream it was to create this film)—there was another motive. The film is being released on the 200th anniversary of the abolition of the slave trade in the British Empire. It was a momentous event in world history. The massive and vastly rich Empire was largely built on slave labor, and thus the alarmed business and political titans of the time called Wilberforce seditious, and his life was constantly threatened. Wilberforce and his colleagues took on the most powerful forces of the day to abolish the lucrative slave trade. (Sadly, we hear reports today that slavery is an institution that affects millions in one form or another, especially among children.4)

With the end of the slave trade in 1807 and then slavery itself in Britain in 1833 (the latter bill passed Parliament as Wilberforce was on his deathbed—what a blessing it was that God allowed him to see that), it provided a blueprint for the eventual abolition of slavery in America in the 1860s. The evangelical abolitionists in Britain were well ahead of their American counterparts.

The film’s production values are excellent. It captures a period (the late 1700s and early 1800s) that was remarkable in British history. While there was talk of revolution in England (a revolution had already devastated France in the latter years of the 1700s), it remained relatively stable. This stability was due in no small part to evangelicals like Wilberforce who proclaimed biblical truths that helped keep a relative calm in the nation during a time when revolutionary ideas were flowing across the Channel from France and were putting Britain ill at ease.

Amazing Grace is not a Christian film per se. I would argue that for a film to be described as truly “Christian,” Christ and His gospel message should be central to the storyline. Yet chunks of the film reflect the Christian worldview, perhaps even more so than the 1981 movie Chariots of Fire which is often called a “Christian” film. There was little about Wilberforce’s conversion offered in the film; it was largely encapsulated in a scene (charming nonetheless) that took place on the lawn in front of his home, where Wilberforce chatted with one of his house staff and explained his commitment to Christ. And perhaps the most poignant scene in the film is Newton admitting to Wilberforce that, as a former slave-ship captain who was responsible for thousands of deaths, he had been a great sinner, but “Christ is a great Savior.” That magnificent line will probably thrill most Christians.

A Christian watching Amazing Grace might want to see more scenes such as these—and a gospel message that should have been more clearly presented. I understand that scenes were shot which more fully dealt with Wilberforce’s conversion and his faith, but they did not survive the final cut as the film was being reduced to two hours. One of AiG’s board members had the privilege of previewing a longer cut a few weeks ago, and after viewing the final version on Sunday, he observed that many theaters typically want to have 4–5 showings per day as opposed to 3–4, and that meant that some scenes were excised for what were ultimately financial considerations. Thus, some of the scriptural principles that Wilberforce applied in his crusade (e.g., that all people are of “one blood” as Acts 17 teaches) were not highlighted. (By the way, for the scriptural view of slavery, which is often misunderstood by Bible critics, read our recently posted response to reader feedback on this issue.)

I was struck by something else about the film. It’s almost a criticism, but something I eventually dismissed as I learned more about the film’s intent. Amazing Grace purposely does not graphically depict the horrors of the trans-Atlantic passage of slave shipping and the terrible life of slaves at the hands of slaveholders. Speaking with Mr. Wales after watching a preview with him and others who were attending a broadcasters’ conference last Sunday evening, I was told by him that the film was intended to be less violent than, say, the Spielberg slave-ship movie Amistad produced several years ago. Mr. Wales said that there were two reasons for the lack of graphic violent content: his director’s desire to leave the most graphic parts of the slave-ship conditions more to the moviegoer’s imagination; and second, Wales’s own desire to keep a PG rating (“parental guidance” rating) as opposed to a somewhat more restrictive rating of PG-13 (i.e., some content may be inappropriate for children under 13, so parental guidance is suggested). Yet while not an action-packed movie, I was spellbound nonetheless.

William Wilberforce was such a great social reformer, that some historians have dubbed him the “founder of the modern human rights movement.” This is due not only to his fight against slavery, but also to his enacting of child labor laws, prison reform, etc.

Wilberforce had another important legacy, and it relates to the creation/evolution debate that still rages 160 years after Darwin. While Wilberforce was mightily used to abolish the heinous slave trade and saw the culmination of a life’s effort in slavery itself being abolished, there was still more to this unique man’s life. He passed on a special legacy to his son, who, in turn, also wanted to transform British society. His son, Samuel, had a ready example to follow as he tackled a different blight on his nation: the adverse social impact of Darwinian thinking.

It is well known in Britain that Samuel Wilberforce, the bishop of Oxford, was the creationist who engaged in a public debate with Thomas Huxley over Darwin's just-released On the Origin of the Species. Legend has it that evolutionist Huxley won the 1860 debate, just as it is the common myth today that William Jennings Bryan was a total failure at the famous 1925 Scopes “monkey trial” in Tennessee (in which Bryan also defended the Bible’s account of origins). Both legends are largely inaccurate and bear only some semblance to what actually happened. The American and British publics, however, remain largely unaware of the true nature of both events of history.

For example, as “The Athenaeum” summarized the 1860 creation/evolution debate: “The most eminent naturalists assembled at Oxford” took Wilberforce’s side.5 Furthermore, according to another source, Huxley was not convincing in his attempts to counter Wilberforce’s arguments.6

It is not surprising that Samuel, being sensitive to humanitarian matters due to his special upbringing, saw the possible racist consequences of Darwin’s model of origins, which was growing in popularity. Darwin posited the racist belief (especially in his later book Descent of man) that some people groups were more advanced in their evolution than others. 7

There is another legacy to note in relation to the Wilberforces and their Christian faith, but it is an unfortunate one. The denomination in which both were so active no longer stands up for the accuracy and authority of the Bible starting with its very first verse (with some individual exceptions, thankfully). While Samuel defended the Genesis account of creation in his famous debate with Huxley, the Church of England eventually decided that evolution could be embraced. Both father and son would be shocked beyond belief at this compromise today.8

It should be pointed out, and it is well known, that AiG is an apolitical ministry. It avoids the political arena. It’s not our “job” to change the culture—it’s our job to disseminate information, proclaim the gospel, and stand on the authority of God’s Word ... and then see hearts changed for the Lord, as He blesses.

Now, if these changed lives impact the culture, and if God blesses that, then we’re happy to see it. But we are not an activist ministry in the sense of legislating, litigating, or lobbying to mandate change in society.

We echo Wales’s hope that moviegoers will leave the film motivated to ask: “What will you do with the gifts you’ve been given? Will you put them in a drawer and pursue a comfortable life?” We hope they will also want to obtain one of two highly readable books on the life of Wilberforce: the newly released The Amazing Grace of Freedom or Garth Lean’s God’s Politician: William Wilberforce’s Struggle (Helmer's and Howard, 1989). You will be encouraged in your faith as you read more about this remarkable man.