The marine iguana, found only in the Galápagos Islands, displays special design for sneezing excess salt. That’s right, even sneezing lizards demonstrate the provision of our caring Creator.

Wait a minute. Did that animal just sneeze?

Yes, you heard right. It’s a marine iguana, which has the astonishing ability to “sneeze” salt.

Marine iguanas (Amblyrhynchus cristatus) are the only species of iguana that spends most of their time in or next to the water. Most iguanas prefer to spend their entire lives on dry land, but marine iguanas enjoy the surf of the rocky coasts of the Galápagos Islands. But living in this unusual habitat requires some specialized skills.

Most marine iguanas munch algae directly from the wave-splashed rocks where they sit, and the largest males swim out to sea to eat algae floating in the water. The problem with such a diet is that it contains excessive amounts of salt (sodium, chloride, and some potassium).

Think of how thirsty you were the last time you ate something salty. Now imagine how thirsty you would be if everything you ate were saturated with salt! Because the marine iguana’s food is soaked in salt water, salt builds up in its bloodstream. This high salt diet would dehydrate the marine iguana if God had not designed a special feature to help it get rid of this extra salt.

Normally, the kidneys filter salt out of the blood, but the kidneys require a lot of unsalted water to do their job, and this iguana lacks a great supply of freshwater. Fortunately, the marine iguana has another way to get rid of salt without wasting a lot of its precious water.1 Most of the salt from the bloodstream collects in a special gland, located above the eyes, and the marine iguana sneezes the salty fluid out.2 The spray then falls back onto the iguana’s head where it rapidly evaporates, often leaving a crust that resembles a white wig.

A few other animals have salt glands, but they are not exactly the same. Some land iguanas have a salt gland (though they do not have to get rid of nearly as much salt as the marine iguana). Crocodiles, sea snakes, turtles, and even some birds also have salt glands. God was well aware when He created these creatures that some of their descendants would have extremely salty diets and would need this design feature. 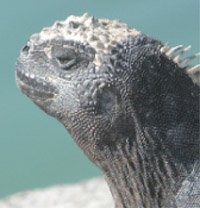 The marine iguana lives only on the Galápagos Islands, located in the Pacific, west of Ecuador, South America. One famous visitor to the islands, Charles Darwin, found this unique creature repellent and wrote, “It is a hideous-looking creature, of a dirty black colour, stupid, and sluggish in its movements.”

In his account of the trip, called The Voyage of the Beagle, Darwin said nothing about how he thought salt glands came to be, but more recent scientists have found that salt glands pose a serious puzzle for evolution. Because the salt glands among lizards, snakes, turtles, and crocodiles are all quite different, evolutionists are forced to believe that these glands evolved not just once, but ten different times in different reptile groups.3 It makes more sense to believe that a wise Creator put the genetic instructions for salt glands into these iguanas’ ancestors. It’s likely these genetic instructions weren’t used until a certain group of descendants (the marine iguanas) needed to rid themselves of the excess salt in their diets.

It appears that God placed within the original iguanas all the information necessary for all the different iguana species that we see today—marine iguanas, desert iguanas, green iguanas, rock iguanas (just as wolves, foxes, coyotes, and all our domestic dog breeds descended from one original dog kind). This variety is not evolution because God placed the information in the genes from the start, and all this variety came about quickly in the first few hundred years after the Flood (see “Creation’s Hidden Potential,” p. 70). An iguana is always an iguana, no matter what variations it has.

In Matthew 10:29–31, the Lord Jesus explained that God cares about even the most insignificant of His creatures. If God cared enough about the marine iguana to design a gland that eliminates excess salt, then He surely cares about human beings, specially created in His image!