Feedback: “You Were So Close!”

The April 2018 National Geographic is a special issue dedicated to “the complicated issue of race.” The cover story, “These Twins, One Black and One White, Will Make You Rethink Race,” features so-called “black and white” twins, Marcia and Millie Biggs. Ken Ham, president of Answers in Genesis, the Creation Museum, and the Ark Encounter, tweeted about this story:

Actually, all humans have the same basic skin color produced by the brown pigment melanin. People have different shades of skin [be]cause of genetic variability. What’s black & white is that all humans belong to one race, one family—descended from Adam1 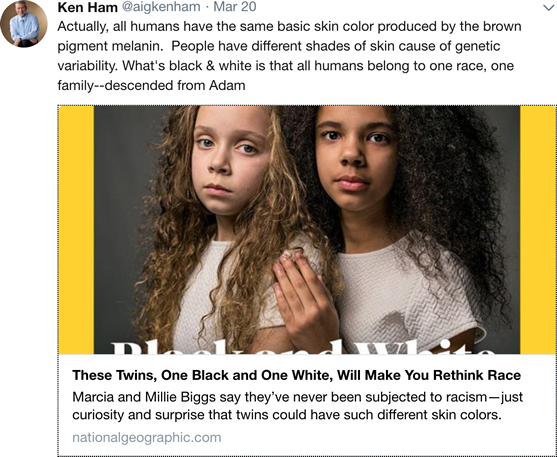 This post garnered a number of responses, many of which were claiming Ken was “so close,” but then he just had to mention Adam.

Wow you were so close to making a factual tweet. No worries next time you got this.

You got close, until you said Adam.

aaaargh! And you were so close too!

You were doing SO well! Then you had to bring in your fictional “Adam”… #Soclose

So Close or Dead On?

Why are these people saying Ken is “so close,” but not quite there? Because, to borrow the colloquialism, they want to have their cake and eat it too. According to an evolutionary worldview, we’d expect there to be different races of humans, some more highly evolved than others. That’s what Charles Darwin taught in his Descent of Man and even what was taught in textbooks into the 20th century. But that’s not what genetic research has shown!

When 2,000 researchers finished mapping the human genome in 2000, one of their conclusions was that there’s only one race—the human race. Biologically there’s only one race, and between any two people there’s approximately a 0.1% genetic difference. So these evolutionists responding to Ken’s tweets recognize the scientific fact that we’re only one race, but they want to try to explain their belief with their evolutionary worldview (a worldview that got the prediction wrong in the first place).

Often you can tell people anything, unless it involves looking to God and his Word for the true history of the world.

What tweets like these show is that clearly people are happy to discuss topics such as racism—until someone brings up the Bible or Christianity. Often you can tell people anything, unless it involves looking to God and his Word for the true history of the world. Suddenly that’s a problem! Why? Because the Cross is foolishness (1 Corinthians 1:18) to the unbeliever, and people love the darkness of the world’s wisdom, rather than the light of God’s Word (John 3:19).

One Blood, One Race

But, unlike the evolutionary worldview, the Bible got the topic of race right the first time. Scripture is clear that Adam was the first man (1 Corinthians 15:45) and Eve was the first woman (Genesis 3:20). Therefore, we’re all descended from Adam and Eve. That’s why Paul can say that God has made everyone from “one blood” (Acts 17:26, NKJV). Biblically, we’re one blood and one race.

The Bible taught this long before science demonstrated it biologically.

As Ken mentioned in his tweet, we’re not really “white and black.” We’re all just varying shades of brown. A quick way of confirming this is to hold up a white or black sheet of paper next to your skin. You’ll realize right away you aren’t actually white or black!

We’re all just shades of brown, some very light brown, others dark brown, largely due to the pigment melanin. The amount of pigment you have is controlled by genetics, which is why one of the twins in the National Geographic article is dark and one is light. And there’s a wide range of genetic variability. Adam and Eve were likely middle brown, thus having the genetic variability to produce all the different skin shades we see around the world today.

The True Origin of Cultures

We have different people groups and cultures around the world because of the events at the Tower of Babel. Noah’s descendants, the only people alive on earth at the time due to the Flood, disobeyed God’s command to spread out and fill the earth. So God confused their languages, forcing them to spread out. These groups were soon separated linguistically as well as geographically. The genetic variations they took with them became prominent within their group, and we still see the effects of that day.

The Only Answer to Racism

Because we’re all descended from Adam and Eve, we’re all one race. This means—no matter where we live or what ethnic background we have—we all have the same problem; we’re all sinners facing the penalty of death (Romans 5:12). But Jesus Christ, the God-man, stepped into history as our relative, a descendant of Adam. He died on the Cross in our place, taking our penalty of death for us. This means we also all have the same solution—the Lord Jesus Christ! That’s why Revelation 7:9–10 describes the scene before God’s throne as:

After this I looked, and behold, a great multitude that no one could number, from every nation, from all tribes and peoples and languages, standing before the throne and before the Lamb, clothed in white robes, with palm branches in their hands, and crying out with a loud voice, “Salvation belongs to our God who sits on the throne, and to the Lamb!”

The gospel is the answer to racism!

Previous Article Did God Give Stephen Hawking ALS? Next Article Feedback: Does the Bible Encourage Masters to Beat Their Slaves?