Ken Ham explains the connection between Darwin and racism in this clip from the Foundations DVD series.

The human heart is a factory for all kinds of evil—including the evil of racism (see Jeremiah 17:9 and Matthew 15:18–19). Still, while Darwin certainly didn’t invent racism, his ideology of evolution has fostered it. Consider the case of Ota Benga—a pygmy from Central Africa, who in 1906 was caged in the Bronx Zoo with an orangutan. Remember the Jews in the gas chambers devised by Hitler to advance the Aryan “master race.” Reflect on the Australian aborigines hunted down in the 1800s by evolutionists in search of the “missing link.”

The full title of Darwin’s most famous work included some stark words: On the Origin of Species by Means of Natural Selection, or the Preservation of Favoured Races in the Struggle for Life. Darwin envisioned the spontaneous formation of simple life evolving into higher forms through the pitiless forces of nature selecting the fittest.

Darwin demonstrated how he believed evolution shaped man in his subsequent book The Descent of Man. In it, he theorized that man, having evolved from apes, had continued evolving as various races, with some races more developed than others. Darwin classified his own white race as more advanced than those “lower organisms” such as pygmies, and he called different people groups “savage,” “low,” and “degraded.”

Darwin wasn’t the first to propose biological arguments for racism, but his works fueled the most ugly and deadly racism. Even evolutionist Stephen Jay Gould wrote, “Biological arguments for racism may have been common before 1859, but they increased by orders of magnitude following the acceptance of evolutionary theory” (Ontogeny and Phylogeny, 1977). 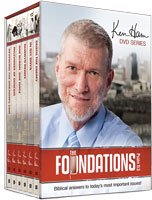 Get the Foundations DVD series.

Darwin’s error was later exposed through the field of genetics. What Darwin didn’t know was that people have the same brown-colored skin pigment called melanin. A person’s genetic makeup determines his potential to produce a certain level of melanin. That’s why we see a range of skin shades in people from light to middle brown to dark. Our differences are only skin deep.

Through an understanding of biblical history and genetics, we see that variations in human skin pigmentation are the result of reshuffling the genetic potential of Adam and Eve and later the eight people aboard the Ark. After the scattering at the Tower of Babel, groups of people became more isolated, allowing for concentration of certain variations within those groups. Thus the development of lighter or darker skin in certain demographic groups has nothing to do with molecules-to-man evolution, but only the decreased genetic potential for variation in isolated populations.

Darwin was wrong. Humans are not split into various races at higher and lower stages of evolution. The Bible makes it clear that God specially created mankind in His image. We are all descendants of Adam, “the first man” (1 Corinthians 15:45), and Eve, “the mother of all living” (Genesis 3:20). So only one race exists—the human race.

God, who made the world … has made from one blood every nation of men to dwell on all the face of the earth, and has determined their preappointed times and the boundaries of their dwellings, so that they should seek the Lord … Truly, these times of ignorance God overlooked, but now commands all men everywhere to repent, because He has appointed a day on which He will judge the world in righteousness by the Man whom He has ordained. He has given assurance of this to all by raising Him from the dead. (Acts 17:24, 26–27, 30–31)

No matter what your skin color or ethnic background, your critical need is the same as every other person’s: just like Adam, you have rebelled against your holy Creator and must appear before Him one day.

Thankfully, God will judge the world by the Lord Jesus who died on the Cross as the perfect substitute for sinners who turn to Him in repentance and faith. Jesus Christ’s Resurrection was God’s stamp of approval on His Son’s teachings and sacrificial death for our sin. Knowing this, we echo the words of Revelation 5:9, “For You were slain, and have redeemed us to God by Your blood out of every tribe and tongue and people and nation.”

Get Answers about Racism