What Do We Mean by “Human Reasoning”?

I'm going to start off by apologizing in advance if I received incorrect information.

If you had done any research at all, you would know that there is no scientific reason why the Bible couldn't be literally accurate. So why are you putting evolution under 'Human Reasoning,' as if it's the more logical position, and you have to have some sort hokey message from God in order to believe in creation?

There's plenty of scientific evidence to support the fact of a literal, 6-day creation.

You actually sank money into this? On behalf of all the rational Christians out here, please just stop. You make us all look stupid.

It seems that there is a misunderstanding about the message that the museum is conveying here. Simply put, the point of this exhibit in the Creation Museum is that our foundation does not start with human reasoning, as Descartes and other modern thinkers have suggested, but with the Word of God. “The fear of the Lord is the beginning of knowledge and wisdom,” as Solomon wrote in Proverbs 1:7. In fact, all wisdom and understanding begin with God’s revelation of Himself in His Word.

For those that have not been able to visit the Museum yet, this feedback comment concerns a room known as the Starting Points Room. The sign at the introduction to the room asks why there are such different views about the past, even though we are all studying the same facts: “Same facts, different views, why?” 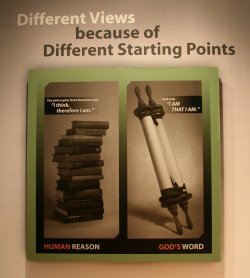 The room immediately answers this question: “Different views because of different starting points.” Under the sign is a depiction of these two starting points: (1) a pile of books and a quote from Descartes and (2) a Bible scroll and a quote of God revealing Himself.

People’s view of the past is controlled by their starting assumptions. There are only two places to start: human reasoning or God’s Word. The museum uses the word “human reasoning” to describe any view that rejects God’s written revelation and, instead, depends on alternative beliefs about the past. Our ability to reason, without the aid of the Bible, is greatly limited because we were not there to observe creation and we cannot repeat those unique events to test our assumptions. In contrast, if we start with “God’s Word,” we have in our hands the eyewitness account of the Creator, who saw how the universe began and who knows how the universe continues to function.

So Bible-believers are 100% in favor of human reason, given the proper foundation. In fact, the museum argues that all logic and reason are given by and require the existence of the Creator God of the Bible (as we explain in the Natural Laws video in the Wonders Room). The issue at stake is where our reasoning begins, because all thought systems must begin with axioms accepted as true. Even for those that don’t believe it, God’s Word is a logical starting point, but humans prefer to look somewhere else. And as a result of their false premises, their conclusions are often flawed. As the feedback submitter states, there is not a reason to doubt the Bible, and there is “plenty of scientific evidence to support the fact of a literal, 6-day creation.” Our Answers section gives plenty of information on numerous topics giving reasons to trust the Bible; it also explains why trusting the Scriptures from the first verse is vital to the good news of the gospel.

I just want to say that your website and what you have done has really changed my life. I've been a Christian my entire life, and I love learning things - you name it, and I'll probably have an interest in it.

I stumbled upon your website, and man, I have been really blessed. Thank you so much for paradigm shifts - I realized that I was using man's word to evaluate God's word. I also realized that this whole creation argument is more complicated than what schools teach. It's amazing for me to see that so many Christians readily challenge the Bible but would rather just sit with their education.

Thank you so much for your website. Everytime I have a friend who is asking about creation and evolution, I refer them to this site. You bear good fruit!

Previous Article Is young-earth creationism a childish belief? Next Article Are Scientists Really Biased by their Presuppositions?